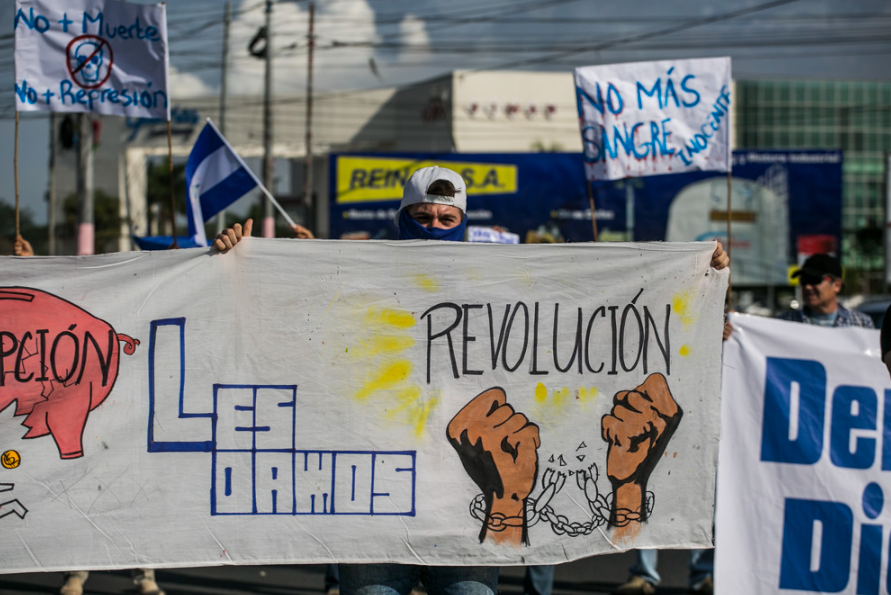 At a student protest in Managua, a masked protester holds a banner calling for a “revolution.”

Erupting from dissent over Ortega’s policies, the Nicaraguan protests of 2018 became a focal point for a diverse group who opposed the Ortega regime.

According to Human Rights Watch’s World Report 2019: Nicaragua, the broad protests of Ortega’s government resulted in the rape, torture, and killings of protesters by the National Police. As of September 2018, government forces in Nicaragua were responsible for most of the 324 people killed and over 2,000 injured as a result of suppression of protest. But Ortega’s influence didn’t stop at the killing of protesters. Extending his power to the health system, the Ministry of Health’s public hospitals turned away wounded protesters who sought medical care.

In line with “a policy” to “eradicate the structural conditions that support opposition voices and critics,” government supporters and police force members kidnapped and arrested hundreds of protesters, according to the United Nations Office of the High Commissioner for Human Rights (OHCHR).

Talking about how Ortega’s dealings with the protests affected his political career, Moreno said, “I think he underestimated the opposition, and the poor way he handled the conflicts in the last couple of years has snowballed. Politically speaking, he made a number of miscalculations. Since then, what the Nicaraguan population has seen is the totalitarian element of Daniel Ortega. That was not the case in 2010, 2011, 2012.”

Even after international demands for the release of political prisoners and protesters resulted in the release of 30 detained protesters in October 2018, Ortega’s government continued its totalitarian reign. In particular, Ortega’s response to the Covid-19 pandemic mirrored the strongmen responses in other countries like Brazil — denying the severity of the situation, refusing to impose a national stay-at-home order, and praising the “hard-working spirit of Nicaraguans” that he expected to continue showing up for work.

Despite pandemic-related health concerns, Ortega staunchly supported elections in November 2021, seeking his fourth consecutive term.  For Nicaraguans, the same element of discontent that was present during the protests remained. Martinez highlighted the issues with the current government, adding that many of the violations of human rights, such as restrictions on freedom of expression, reported by international organizations only begin to touch the surface of what is really happening.

“The people of Nicaragua want a change in the current system of governance, which has been characterized by corruption, total disregard for human rights and freedom of free expression, and systematic attacks on the Catholic Church,” Martinez said.

Beatriz García Nice, the program coordinator for the Latin American Program at the Wilson Center (a top non-partisan think tank based in Washington D.C.), drew a direct comparison between Ortega’s tactics and the ones used by the dictator he helped oust.

Nice said, “It’s worth highlighting that Ortega is involving himself in the same things that he fought against in trying to free Nicaragua [in the 70s].”

After Ortega’s overwhelming but widely criticized re-election, attention has turned to the possibility of public pushback. In terms of the potential for violence, Martinez does not think that widespread protests will be possible against such an oppressive regime.

Martinez said, “The government has control of the guns and the judiciary, so who would dare to protest? We are facing a heartless person who does not respect human rights.”

Nice agreed with the sentiment that protests would be unlikely.

Nice said, “The fact that Ortega is cracking down on political opposition means that it is very unlikely that there will be protests, especially for common citizens or civil society because he has inspired fear in them.”