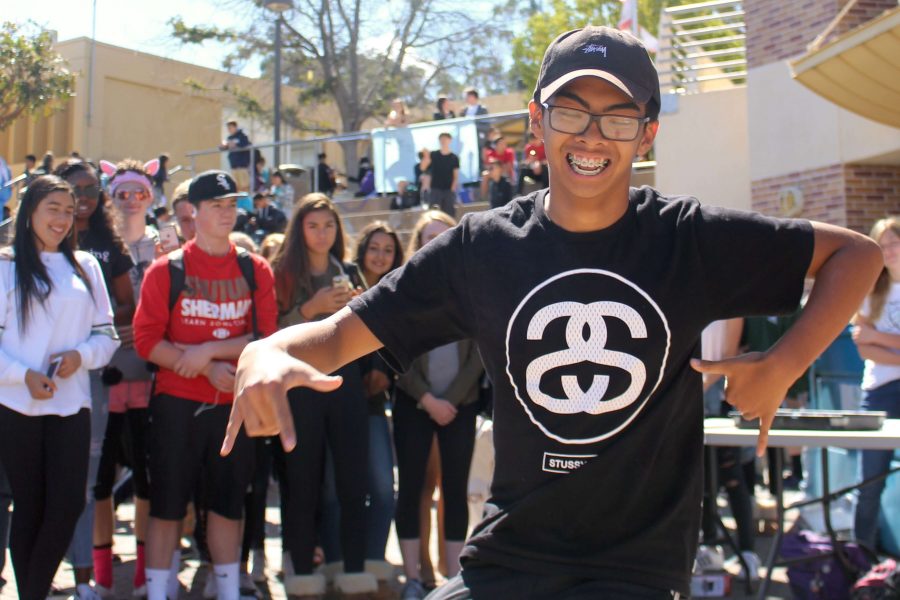 Students gather around the quad while junior Miguel Encarnacion dances to the music.

Lunchtime is a time that many students look forward to every day. It serves as a break that interrupts a long day of classes and allows time for eating and socializing.

In some cases, students look forward to attending a club meeting at lunch.

There are 133 clubs at Carlmont, according to Carlmont’s website. With the help of a teacher advisor, any student at Carlmont is capable of starting a club regarding a specific topic or cause. Common types of clubs include social gatherings, charity fundraisers, and ethnic promotions.

Music played while eager students rushed from booth to booth. This year, students also began dancing in the crowd.

“The purpose of Clubs fair is to give the clubs a platform to share their message while giving everyone an opportunity to get involved and experience the diversity we have at Carlmont,” said senior ASB student Kimberly Lane.

Junior Liam Gunning co-founded the newly-emerging Ocean Club, which had a booth at the fair.

“[Ocean Club] is a club where ocean lovers can come together and share their love for it! During clubs fair, we gave out informational fliers about the club. It was overwhelming how many people signed up,” said Gunning.

Some clubs even sell items, typically food, in order to fundraise for their causes.

“We sold kebabs and it went pretty well; people seemed to enjoy them. The money we raised is going towards club sweatshirts, and we’re going to decide as a group to see what we’ll do with the rest,” said junior Persian Club member Marjan Moshiri.

Freshman Haider Masud was impressed with his first Clubs Fair.

“It was cool to see all of the clubs and all of the different types of food that represented various countries. I might join Tennis Club or Key Club if it’s not too late,” said Masud.