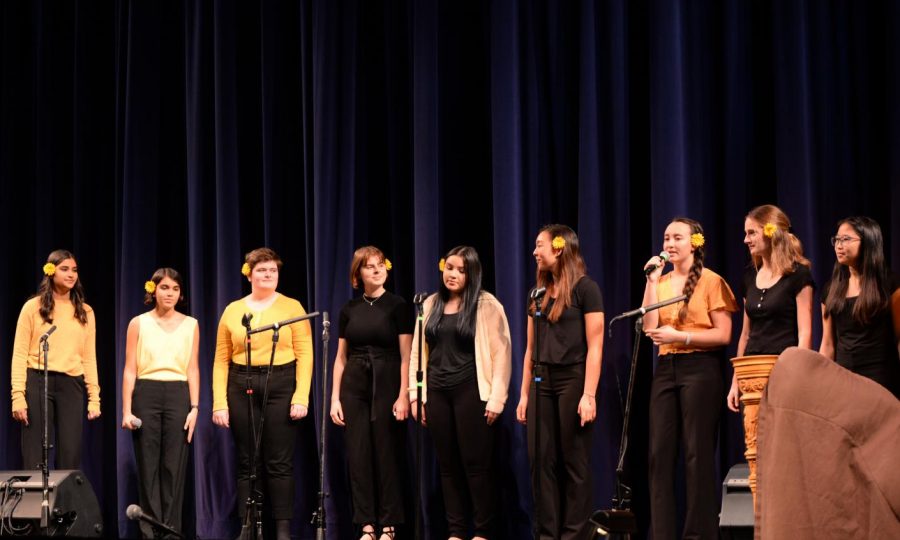 In Treble performs at the Carlmont choir spring concert.

Carlmont choir students decided to form a new a cappella group to allow more students to join the choir and branch out to different musical talents.

Joining an a cappella group is a way for singers to better develop their musical listening skills. According to Musical U, listening to people sing without instruments engages the ears and helps musicians become better active listeners.

The new choir is an addition to the three a capella groups already available at Carlmont: Out of the Blue, In Treble, and Fine Tuning. Each a cappella group is specific to a different choir. Chamber Singers can audition for either Fine Tuning or Out of the Blue, and the Treble Clef choir can join In Treble. The different a cappella groups get the chance to perform and show off their hard work at choir concerts or at the Choir Cabaret Night.

The a cappella groups are student-run, meaning that they practice outside of school with elected student presidents. The students are also in charge of choosing songs, arranging the music, leading practices, and communicating with everyone in the group. Choir director Genevieve Tep will occasionally step in to provide help when needed.

“I provide guidance and help to facilitate auditions,” Tep said.

However, because there are only three a cappella groups, not every choir student gets the chance to participate. Because of this, co-founders Valentina Espinosa and Payton Zolck decided to form another a cappella group, Lookin’ Sharp. The group includes choir students from three different choirs: Highlanders, Women’s Choir, and Concert Choir.

“I saw that all the other advanced choirs had a cappella groups, and I thought it was unfair that the newer choir kids didn’t get to have the same experience. I also wanted to introduce some newer choir kids to a cappella so they will be ready when they move into the upper choirs,” Espinosa said.

According to Espinosa, Lookin’ Sharp will sing pop songs as well as older songs. After the songs are chosen, group members then will meet after school to rehearse for the upcoming choir concerts.

“I greatly enjoy being a part of this group because everyone is so incredibly nice and having most of the group as friends is honestly what makes me so happy to participate,” said Maya Henry, a group member.