Students knit for a brighter future 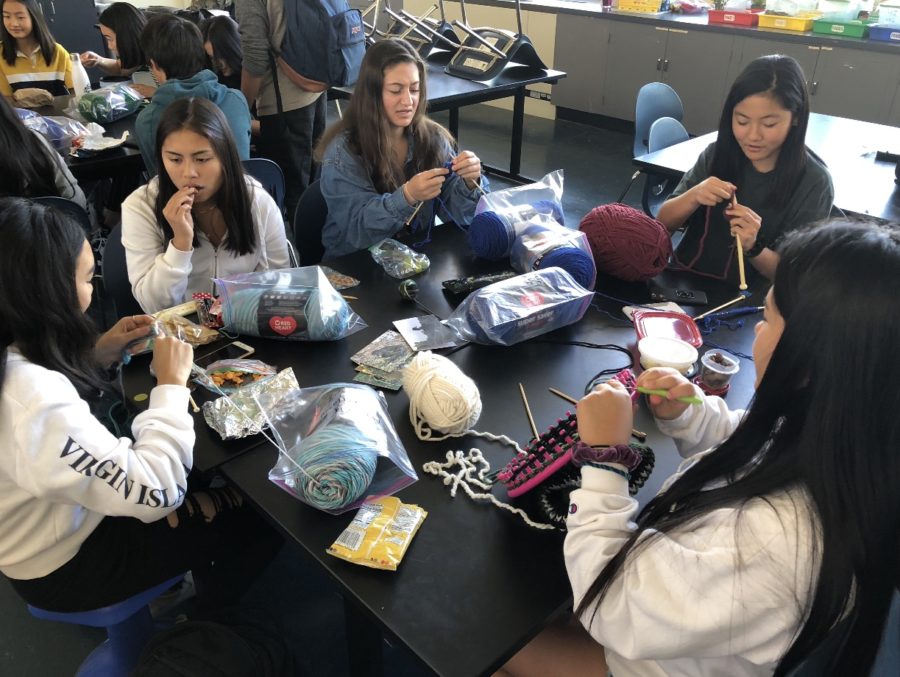 Emily Kim, a sophomore, and some of her friends talk and knit during lunch.

Through the Gosh Yarn It Club, students have the opportunity to relax and also to help the homeless of the Bay Area.

Emily Kim, Sam Turtle, and Sabrina Jackson are the three sophomore founders of this new knitting club. Kim is the president, while Turtle and Jackson share the vice president role. The purpose of the club is to knit various items, such as scarves and hats, and to leave them in a local homeless shelter with notes attached to them.

“I think our club is unique because we are hands-on and like to stay away from the lecture style attitude of other clubs. We foster a warm environment that teaches people a new skill as well as provides an opportunity for community service,” Kim said.

The idea for this club originated from Melissa Hero, a biology teacher. Hero would have students come in during lunch and knit along with her. After seeing Kim come in frequently, Hero suggested that she start a club.

“I find it [knitting] cool because you get to create something and reduce anxiety. High school students are always so stressed and wound up, so I think that knitting would be stress relieving and relaxing,” said Hero, who began knitting two years ago.

The club meets every Monday in C14. While attending these meetings, many students begin to recognize the benefits of knitting.

“I learned how to knit in third grade. I chose it as an extracurricular and found that it was fun. In elementary school, I was obsessed with it, but in middle school, I rarely found the time [to knit]. I learned that picking it up again during high school is quite relaxing,” Kim said.

More experienced knitters, like Kim, help beginners knit as well. This creates a welcoming environment for all students.

Turtle said, “I [somewhat] know how to knit, but I haven’t done it in so long … I feel like I am relearning with other members of the club.”

“I recently found out that there is another knitting club, and I did feel a little guilty that I had started a similar club without any previous knowledge that Sock Club existed. However, we cater to different groups of people and focus on different projects, so I feel that there will not be any conflict,” Kim said.

Through knitting, Jackson, Turtle, and Kim strive to make an impact on the local area.

Jackson said: “We want the homeless community to feel loved. [We] also want Carlmont students to feel the joy of giving to others.”