Students only dream of getting enough sleep 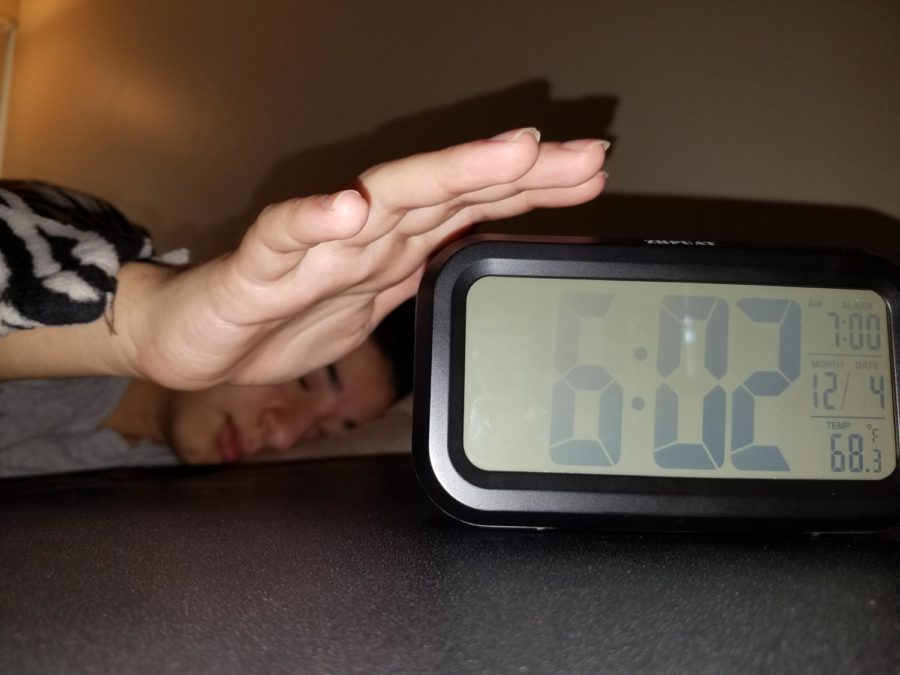 Many students lose sleep due to lengthy homework assignments and stress.

All students have been there— the fight with morning sleepiness, which they will inevitably lose.

Every night, a person needs to spend at least 8 hours laying in a bed unconsciously.

It may seem like a waste of time at first, but sleep turns out to be one of the most important functions that the human body has to perform.

According to Harvard University, a new theory of brain plasticity has found the most recent and compelling explanation for why we sleep. This theory is based on findings that sleep is correlated to changes in the structure and organization of the brain.

As it turns out, sleep and the processes that happen during it serve as a “cleaning process” for the brain.

Shamina Thilahar, a junior, said, “I find it easier to focus and solve complicated tasks if I had a good night’s sleep the night before.”

According to The New York Times, sleep is critical to maintain focus and alertness, to repair and maintain brain cells, and to clear out toxic metabolites.

Tammy DePaoli, the head counselor at Carlmont, said, “I noticed that students have a hard time focusing in class when they are sleep deprived.”

As essential as sleep may be, in modern society, most high school students ignore the need to sleep in order to meet personal expectations and satisfy the status quo.

Thilahar said, “We are taught to believe that to be successful, we have to get a good education. The next logical thing would be to think that the best colleges provide the best education. Therefore, we must try our best to get into a good college.”

There are also other factors that impact the amount a student sleeps.

Elizabeth Gurevich, a freshman, said, “The reason I’m sleep deprived is that my schedule is overloaded with extracurricular activities. On top of that, I have homework to do.”

According to UCLA Health, teens have to balance the weight of many demands on their time. The biggest of these demands is school.

Shelly Bustamante, a therapist and counselor at Carlmont, said, “Some students just work themselves out. They overestimate their abilities, and at the end of the day, there is only so much that they can do.”

Many students are encouraged to do anything they want, but they often find that they cannot do everything.

Connie Dominguez, a counselor at Carlmont, said, “Many students feel like they have to do it all to get into a good college.”

Students are under a constant pressure to get perfect scores, which often costs them their sleep or social life. In most cases, social life does not suffer.

According to Huffington post, there is scientific evidence that clearly shows that evolution has favored the development of complex social skills and the brain architecture that goes with it.

Now, more than ever, the internet has replaced many forms of social interaction. It has also become the most common way for high schoolers to interact with the outside world.

According to the study conducted by Stanford University, teenagers have a certain pressure not to sleep. They are biologically programmed to stay up late while internet connection on their phone provides them with a distraction; the bright screen that teenagers stare at tells their brain that it’s not the time to go to sleep yet.

“Many students are sleep deprived because they procrastinate on their assignments due to the influence of social media. They will be standing in my office early in the morning and flipping through their phones,” said Leonor Zarco, the attendance clerk at Carlmont. “It’s almost like an addiction.”

A 2012 Survey by Common Sense Media discovered that one-third of all teenagers text and half of them visit a social media platform daily, making digital communication a part of everyday life.

Whatever the case may be, students are sleep deprived. Those that have been ignoring one of the most natural instincts, the need to rest, would experience the worsening condition of both mental and physical states.

According to Harvard University, sleep deprivation negatively impacts the mood and the ability to access higher-level cognitive thinking.

“I tend to laugh a lot and say ridiculous things when I’m sleep deprived,” Thilahar said. “My mood also changes very suddenly. I could become angry and irritated out of nowhere.”

Cognitive thinking, an essential part of learning, is affected by the lack of sleep, which is evident in the closer examination of the correlation between the amount and quality of sleep that the student gets and their grades.

The Sequoia Union High School District has addressed the problem by revising the schedule. The new schedule has been implemented into Carlmont since the fall of 2016 and allows all students to sleep later in the morning. Zero period now starts at 8 a.m., and all first period classes start an hour later than in the previous schedule.

“The late start was supposed to give us an extra hour of sleep, but we never actually get it,” Thilahar said. “I just go to bed later every night because I procrastinate and then have to do a lot of homework.”

However, more things need to be done in order to address and potentially resolve the issue of the lack of sleep.

Bustamante said, “Teachers should be more lenient with tardies, especially during zero and first periods.”

Whether they strive for good grades, a strong social life, or both, it is important for students to maintain a healthy sleep cycle.

Thilahar said, “Students should always prioritize their health over educational and personal concerns because health will mean more, especially in the long run.”