Students plug their noses as the Carlmont campus expands 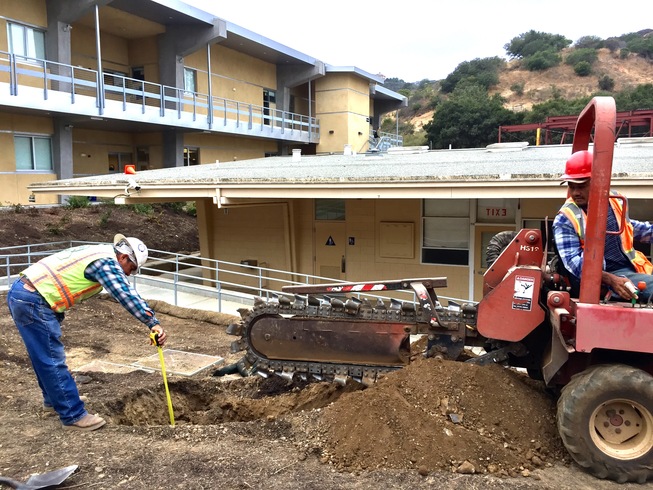 Project workers measure the depth of the ground in order to dump fresh soil for upcoming landscape work.

The pungent smell of decaying feces wafted throughout the halls of the Carlmont campus during the week of Sept. 26 as progress on the new S-wing buildings moved into the landscaping portion of the project.

The ripe smell from the landscaping is due to a mixture of organic matter being added to the soil in order to allow plant growth.

“Plants won’t really grow well in the existing soil that we have up on the south side of the T-wing, so in order to allow maximum plant growth, we need to amend the soil,” said Carlmont’s Administrative Vice Principal Grant Steunenberg. “Sometimes animal manure mixed in with decomposing plant matter is used, but there is also decomposing fish and chicken manure. Either way, the smell is going to be rich.”

In order to determine if the soil needs amendments before planting, certain experiments must be conducted.

Project Manager Allan France said, “First we have to test the dirt by sending the landscaping lab people up here to take samples. They then come up with proposed amendments for the soil in order to give the plants the best opportunity for growth. Once we have those amendments, we add them to the existing soil. This is the main cause for the smell around campus.”

With the soil work on its way to completion, the preparation for landscaping is set to come to a close in a week or two.

France said, “The next step we do after this is to spray the soil with hydroseed, and that’s going to be a native grass and wildflower mix. It traps moisture and it should start germinating really quickly. As soon as it’s sprayed, it will cap the smell and seal it up, ending it right there.”

In the meantime, Carlmont custodial staff is working hard to make sure students have a pleasant time on campus.

Carlmont’s Plant Manager Jerome Harris said, “It is a part of my job to ensure that students have a certain level of comfort while they’re at school. And if there are smells wafting throughout campus, we do our best to eradicate it. But the smell won’t kill you, it’s not toxic in any way shape or form, and we just ask that students put up with it for a couple more days.”