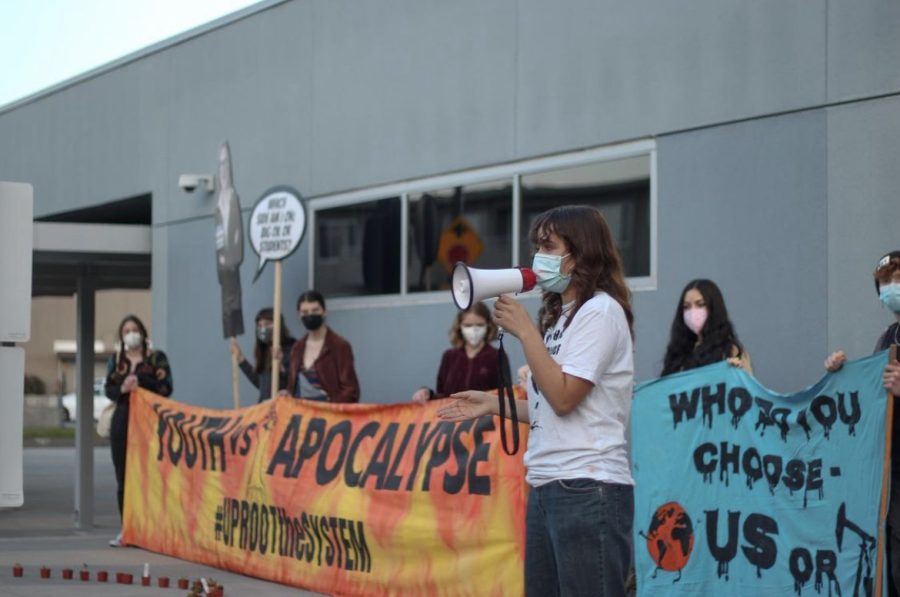 Members of the YVA protest stand with signs outside of the CTA building to protest fossil fuel usage.

As the effects of climate change increase rapidly, many organizations are calling people to action by organizing beach clean-ups, promoting sustainable products, and teaching people how to compost and recycle properly. But one group is taking a different approach.

Founded in 2016, the Youth vs. Apocalypse (YVA) group is a student-run organization. Their main areas of focus include abolishing Immigration Customs Enforcement (ICE), supporting Black Lives Matter and LGBTQ+, and uplifting the voices of youth of color and marginalized people.

YVA has led numerous protests and demonstrations to protest against practices that speed up climate change. Recently they have taken action to get the California State Teachers Retirement System (CalSTRS) to divest from fossil fuels. So far, they have held three protests outside of the California Teachers Association (CTA) building, including one on Jan. 28.

At the recent protest last Friday, two dozen members of YVA stood outside of the CTA building holding vibrant signs and banners. “Who do you choose — US or BIG OIL,” “#UPROOTtheSYSTEM,” and “CTA stand with students; divest from fossil fuels,” some of them read. They also lined plants up in a circle to represent the wildlife being killed by climate change-induced wildfires.

Raven Fonescajensen started the protest by introducing why they were there and what they stood for.

At 5:30 p.m., five members of the YVA met with the CTA to discuss their demands. The meeting lasted two hours, and the youth delegates ultimately gained the support of the CTA president, Toby Boyd.

Boyd agreed to put the story of the YVA campaign in the CTA magazine, which will help reach the majority of teachers in California. In addition, the students will stay in touch with Boyd, continuing to urge the necessity of divestment.

After the meeting, YVA posted on their Instagram page to thank everyone for their help and dedication.

“Thank you to everyone who came out to our actions yesterday. Youth met with the president of CTA, calling on them to support fossil fuel divestment. We want our teacher’s money taken out of an industry that is driving the climate crisis and actively hurting Black, Brown, and low-income communities in California and across the world,” YVA said in their Instagram caption.

During the protest, students also emphasized the effect of climate change on low-income communities and how fossil fuel industries are affecting indigenous land.

The protest was overall successful, but it won’t be the last time YVA protests outside the CTA.

“It was overall a positive meeting, and we are excited to see things move forward. In the meantime, we will continue to visit the CTA each Friday to remind them of the urgency of fossil fuel divestment,” said Khalid Kishawi, one of the leaders of YVA.