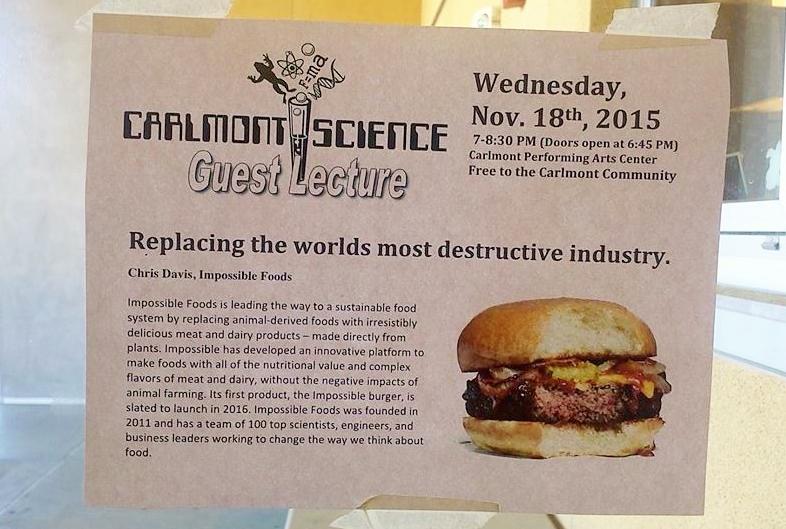 Impossible Foods is a company based in Redwood City that uses biotechnology to create meat directly from plants. The Carlmont science departments holds several science lectures per year with different scientists as guest speakers.

To eat meat or not to eat meat?

That is the question that began to plague biotechnologist Chris Davis as his team at Impossible Foods researched the world’s most destructive industry: animal farming.

“People like meat because it tastes good. It’s a part of our lives,” said Davis. “There’s even a social connotation with meat and good living nowadays.”

Unfortunately, more than 30 percent of the earth is used to raise animals that feed humans, and those animals (namely cows) emit more greenhouse gases than South America, Africa, and Australia combined.

On Wednesday, Nov. 18, Davis spoke to Carlmont students about his latest work at Impossible Foods and his plans for the future, which involve replacing animal-based meat with plant-based meat.

Senior Austin Tang was intrigued by Davis’ take on the the animal farming issue.

“I already knew a little bit about the resources it took to produce animal-based meats, like cows needing a lot of water, land, etc., so the speaker confirmed my beliefs that there needs to be a change in our diets in order for our environment to survive,” said Tang. “I didn’t really know about plant-based meats before hearing Davis speak, though, so that was definitely interesting.”

Davis’ goal is to make the plant-based meat taste the same as animal-based meat. Impossible Foods isn’t the first company to experiment with meat alternatives, and using the right proteins, their team has been able to create meat that mimics the tastes of other meats, instead of “always tasting like chicken.”

Not all students were convinced by plant-based meat; others were more hesitant to let go of something so central to their lifestyle.

“He didn’t really change my view on food. [Davis] and his point about greenhouse gas production from cows was really interesting but I’m not going to give up meat. It tastes good and I’ve been eating it my whole life,” said junior Sonia Mahajan.

“I think many would agree it’s a good solution, but I’m not sure how many people would buy or eat it because of the misconceptions about MSG and synthetically-made foods,” said Mahajan.

Nevertheless, the science lecture made students think beyond the medium-rareness of their hamburgers.  After hearing Davis speak, some students were willing to buy and eat plant-based meat themselves.

“If it tasted the same as regular meat, took fewer resources to produce, and had equal or better nutritional value than regular meat, then I would buy and eat plant-based meats,” said Tang.