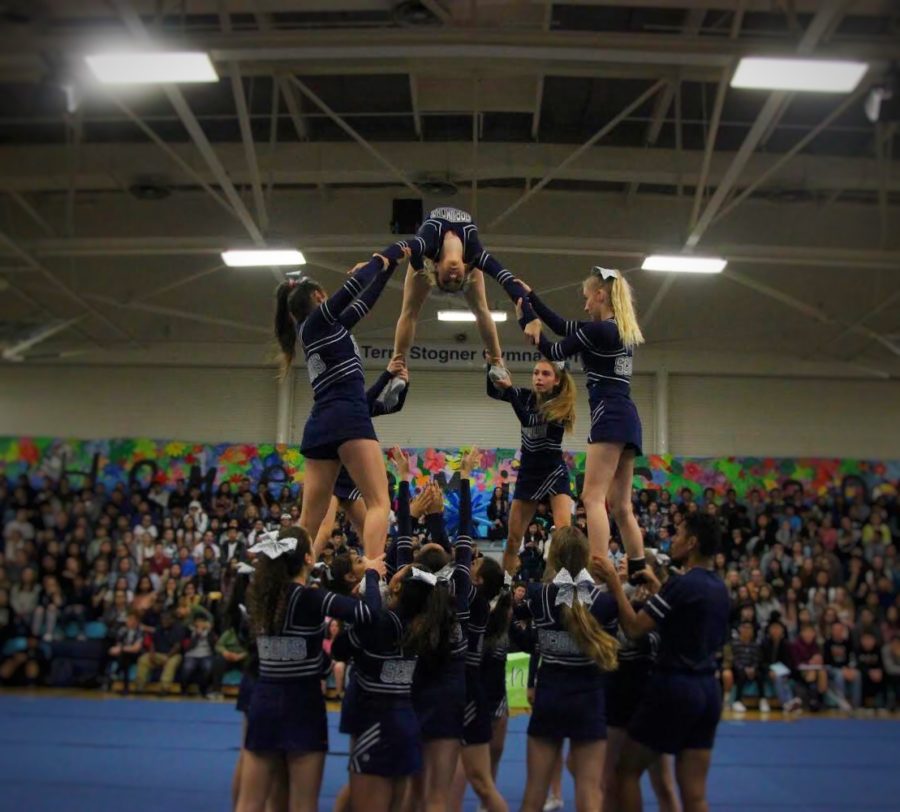 Carlmont cheer shows off one of their new stunts in the homecoming assembly.

As tropical decor lined the walls and a sense of Carlmont spirit filled the air, students packed the bleachers of the Terry Stogner gym on Oct. 25 for the annual homecoming assembly.

From cheer to Drumline, all of Carlmont gathered together at the assembly to celebrate and embrace school spirit through an abundance of interactive performances and activities.

This year featured a tropical theme titled “Ride the Tide.” ASB decorated the gym with palm tree balloons, flowers, and tropical colors in order to compliment the theme.

To accompany the assembly, ASB arranged a spirit week. Many students dressed tropically throughout the week for days such as Lifeguard Day and Destination Day.

The assembly opened with a comical skit led by seniors Harry De Voy, Kyle Dimick, Paul Trembley, and William Yonce. In the skit, they recounted every homecoming spirit activity, such as spirit week and Powder Puff.

Following the skit, Carlmont Intermediate Dance performed a self-choreographed piece to hype up the audience for the rest of the assembly.

“I was extremely nervous to perform, as it was my first ever homecoming assembly, but the adrenaline and energy of the crowd were amazing,” said Kai Leigh Roach, a freshman and member of Intermediate Dance. “The homecoming assembly is such a great way to spark student involvement, and it provides an opportunity for different clubs and groups at Carlmont to share their spirit with the school.”

The Carlmont football team was then introduced, followed by the annual cheer and football combined dance, which honored the graduating seniors of both teams.

After this, ASB arranged an interactive Carlmont Cup game where students ran an obstacle-filled relay against Carlmont staff members, providing students with an opportunity to participate in the assembly.

Natalie Silfvast, a sophomore, said, “One of my favorite parts of the homecoming assembly would have to be Carlmont Cup because it adds an interactive element into the assembly, and it was really entertaining to see my teachers play against my friends.”

The Carlmont water polo team also made an appearance and held another interactive game where students attempted to shoot a beach ball into a hoop in order to win a free shirt.

Carlmont Advanced Dance and Carlmont cheer later performed their own pieces and worked to further energize the crowd.

“One of the highlights of my school year is performing in the homecoming assembly with cheer because we put many long hours into learning our routine, and performing it in front of the whole school makes it worth it,” said Taryn Schloss, a junior and member of Carlmont cheer. “I think the homecoming assembly is extremely beneficial for students, as it provides a break from academics and allows us to enjoy the school spirit of Carlmont.”

Additionally, ASB added a new activity in the assembly that took many students by surprise: the haircut competition. Seniors Tim Krassiev, George Sharkey, Jonathan Deridal, and Elias Wilson volunteered to get their heads shaved for this game. Students from the crowd were called upon to answer trivia questions, and if they answered incorrectly, one of the seniors would get their head shaved.

Maya Blodgett, a freshman, said: “My favorite part of the homecoming assembly was most definitely the haircut competition because it completely took me by surprise. The game was a really good twist on the assembly and made this homecoming even more memorable.”

Finally, Carlmont Drumline and pep band performed their own pieces, which ended the assembly on an energetic and lively note.

“I found it amazing to witness all the amazing details put into the assembly, including decorations, sound, scripts, activities, and all these other timely sacrifices. I’m so happy for everyone who performed in the assembly; they all put on an amazing show,” said Nate Hsich, the freshman class vice president. “It’s hard to say which part of the assembly was the most entertaining because everyone who took part in it worked so hard and had an incredible performance.”

“Though the homecoming assembly takes a lot of time to organize, seeing all of the decorations set up and witnessing the students walk in the gym in awe of the decor makes the hard work worth it,” said Melina Dimick, a junior and member of ASB. “Assemblies, like homecoming, are extremely important, as it provides students with a reason to be proud of their school and to embrace their own school spirit.”