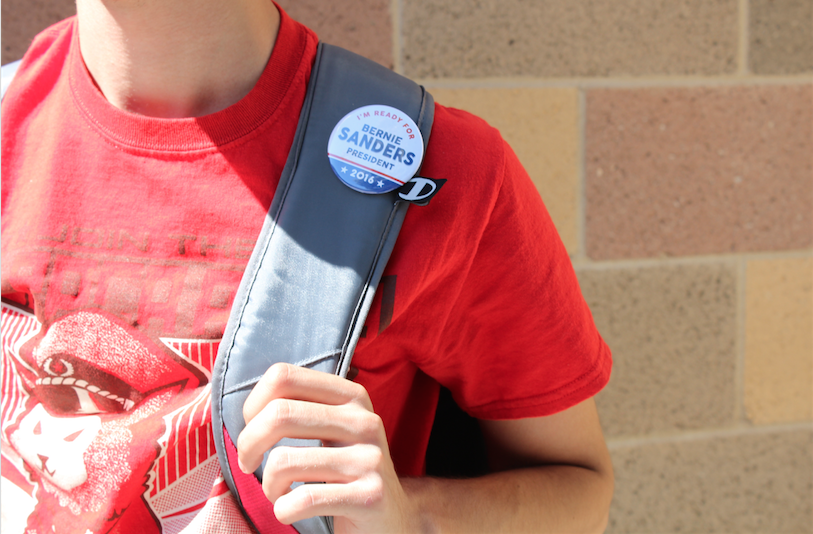 Senior Denis Yudin shows his support for Democratic presidential candidate Bernie Sander by sporting a supportive pin on his backpack.

Students are the future of America, and high school is where opinions begin to form about the politics that will lead America in the years to come.

However, there are many students who are unaware of the details of the 2016 election or even the election process in general.

Freshman Seema Wadhwa said, “I actually don’t know much about the candidates, which is a problem. I think more needs to be done to educate everyone about how presidents are elected and who each candidate is.”

Generally, there is a trend of increased awareness of American politics as one goes up the grades.

Sophomore Armon Mahdavi said, “A lot of what I hear about the presidents is just sensationalized news. I’ve heard about Donald Trump’s offensive antics and Hillary Clinton’s e-mail scandal, but I can’t say that I know what each presidential candidate’s specific platform is.”

Freshmen, sophomores and juniors are not formally taught about the government in class, but some students take the initiative to educate themselves through news articles on the Internet or discussions on platforms like Facebook, Twitter, and Tumblr.

Junior Ashley Wen said, “I won’t be able to vote in this election, but I do have a good idea of who the main candidates are. I’ve read articles on the Internet, and there is definitely a wide spectrum of characters running for president. I am not very interested in the Republican candidates, but I am interested to see who will get the Democratic nomination.”

Many seniors have learned about the government and presidential election through class or by looking up information on the Internet. This is especially true for the class of 2016, as a majority of seniors will be 18 and able to vote in the election.

“I would vote for Bernie Sanders. He’s a strong Democratic candidate who is promoting great liberal ideas to help the middle and lower classes. He believes that immigrants are not the reason for the decline in the economy, and he’s trying to increase wages and create jobs to progress the economy,” said senior Alexis Morrow.

California has a reputation as a strongly Democratic state, especially in the Bay Area and Los Angeles area. For many liberals, Donald Trump is a candidate unimaginable as president.

“Donald Trump is the candidate I keep seeing in the media,” said Morrow. “He’s the voice of a wide group of right wing Republicans who haven’t been able to share their opinions so vocally, and he’s using his platform to promote radical immigration policies and further prove the harsh reality that racism is common, alive, and well. There is no way that he can get the Republican nomination, let alone win against the Democratic nomination, but it’s scary to know that he has a large amount of support.”

The presidential election period is a time when students have more awareness of politics, whether that is through voting or learning about America’s political system.