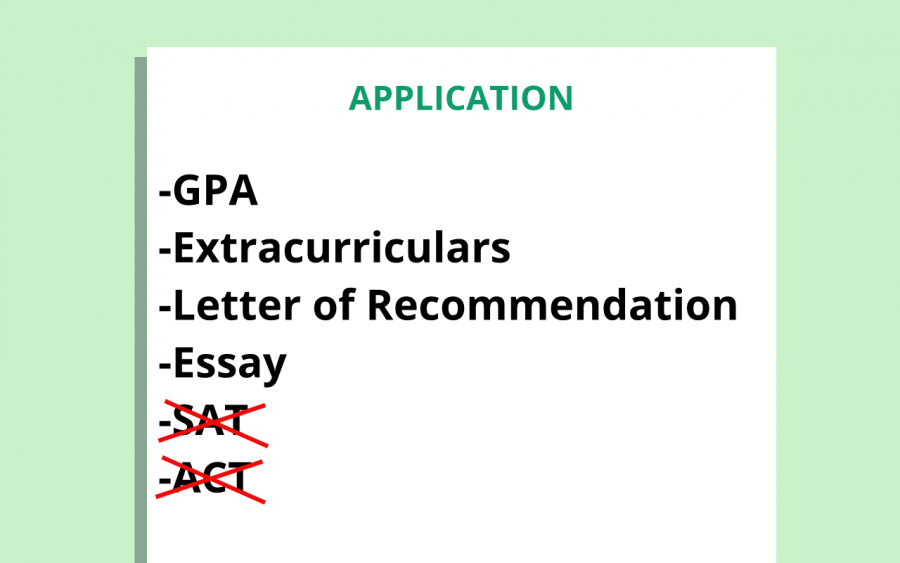 Several colleges have adopted a test-blind application process as SATs and ACTs have proven to be a poor measurement of intelligence. “There are so many different reasons why a student would not do as well as another student on a test that doesn't determine intelligence,” said Abby Kizner, a sophomore.

In other words, universities will focus less on the SAT or ACT scores when reviewing applications.

Several students are pleased with this change. As college admissions pressures continue to accumulate, the removal of standardized testing requirements would relieve some of these pressures.

“Tests can be very stressful, and it’s not good for the mental health of a lot of teens. Everything is already so stressful, and I feel like college admissions are becoming increasingly more competitive and difficult,” said Joie Matsuda, a freshman at Carlmont. “I definitely think that it’s really helpful that they’re not focusing on tests for college admissions as much.”

There are multiple reasons for the removal of test requirements on college applications. For one, the COVID-19 pandemic has made it difficult for students to take the test due to exam cancellations.

Additionally, the SAT and ACT have been proven to favor wealthier students. According to Inside Higher Ed, the lowest SAT scores were among students from families who make less than $20,000 in family income, while the highest averages were from students whose families make more than $200,000.

“A lot of kids will have SAT tutors, and that is very expensive, and obviously, a lot of kids can’t afford to do that,” Matsuda said. “They might not even have enough time because they have to support their families, so they need to work. That takes away time from studying for the SAT, so obviously they won’t be able to do as well as those who are richer.”

Factors like mental health and learning disabilities can also contribute to the lack of equity on standardized tests.

“There are so many different reasons why a student would not do as well as another student on a test that doesn’t determine intelligence,” said Abby Kizner, a sophomore. “You could be struggling with mental health, and it affects your test score. You could have test-taking anxiety. You could have something like dyslexia where it just makes certain questions completely impossible for you to even understand.”

On the other hand, some students feel displeased with test-blind applications.

“I think it’s better that college applications include SAT or ACT scores because it really helps those whose grades may not show their full potential,” said Sarah Nguy, a sophomore at Carlmont. “I also think it gives colleges more information to work off of and gives students a wider range to show their knowledge.”

Additionally, students may feel pressured to improve other areas of their college applications to compensate for the absence of test scores.

“I feel like the removal of requirements adds more stress to me, along with other students, because now we have to focus more on our grades and our extracurriculars since they matter more than they used to,” Nguy said. “Many of us are already overwhelmed by our academics and activities and hoped our SAT or ACT score could improve our chances for college, but without it, it puts more pressure on us to have outstanding grades and extracurriculars.”

Overall, the change in testing requirements could have a positive or negative effect depending on the student.

“Some people have been taking SAT prep classes forever. Other people don’t have the time, money, or resources, and I think that’s not fair,” Kizner said. “I do think that it’s good that colleges are focusing less and less on those tests.”