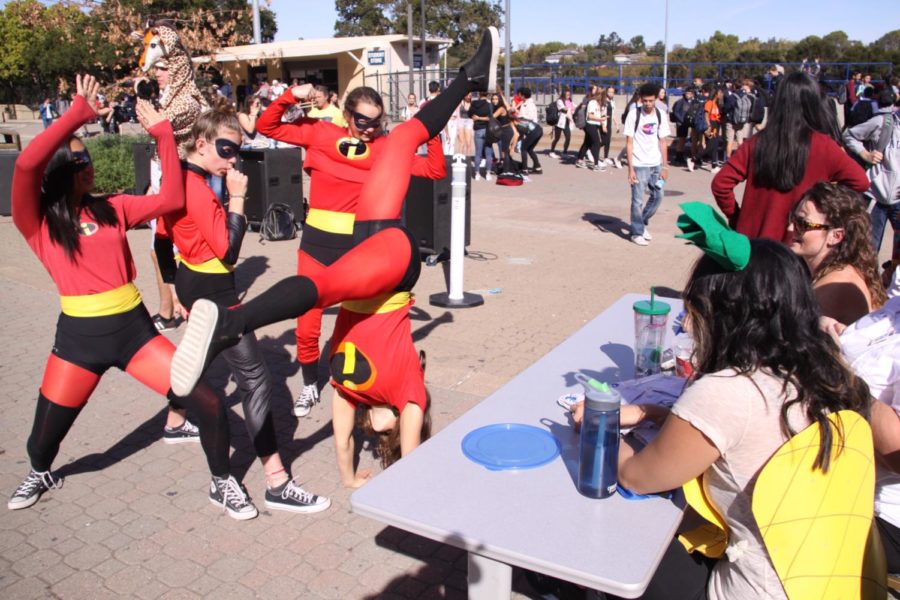 "The Incredibles" group costume amazes the judges with their truly incredible poses.

A time to carve pumpkins, let people be whoever or whatever they want to be, and to take candy from strangers, an experience that is far and few between.

Every year on Oct. 31, ASB hosts a Halloween rally in the quad during lunch. They play Halloween-themed music and hold a costume contest in which students can showcase their creativity and quirkiness.

This Halloween, spirit continued to thrive as exemplified by the Carlmont population and the many impressive costumes in the quad.

On Wednesday, there were many participants who came individually or with friends; however, only two group costumes and two individual costumes won resulting in nine winners chosen by three judges.

“We take a look at the creativity and execution of the costumes [when judging],” said English teacher Tiffany Jay, one of the judges. “I loved seeing the creativity from students’ costumes this year.”

Kyle Dimick, a senior in ASB, was the emcee for the contest. He directed the contestants to the designated areas for each round of the contest and announced the winners to the audience.

One of the individual winners was Emma Evans, a sophomore dressed up as Xayah from “League of Legends.”

Nate Hsich, a freshman, dressed up as Colin Kaepernick in an imaginative way and was honored as the other individual costume winner.

The first group winners were Greta Foehr, Jacey Kelly, Melina Dimick, and Zahra Haider. They are a group of juniors, excluding Kelly who is a sophomore, who dressed up as the Incredibles from the movie “The Incredibles.”

They portrayed Mr. Incredible, Jack Jack, Elastigirl, and Violet respectively and impressed the judges with their dynamic poses as well as their commitment to character. Each student took an iconic pose of their character and one even did a backbend.

The second group costume that won was a group of sophomores dressed up as the monks from “Monty Python and the Holy Grail.”

Like the Incredibles group, these sophomores stayed in character. They hit their heads with books and hid their faces from the audience in the quad.

Students of all grades competed in the competition and thoroughly enjoyed it.

“It was cool seeing all of the costumes,” said freshman Anita Beroza, “Costumes are fun to dress up in, but it’s only socially acceptable to go crazy with makeup and robes during Halloween.”

Beroza dressed up as Julius Caesar and made it to round two but did not win overall.

The winners all received Carlmont T-shirts as well as candy.

Even though only nine people won the contest, many participated and received candy for their efforts.

Whether the costume was handmade or store bought, the Halloween spirit at Carlmont did not wane from last year and it does not plan to in the coming years.