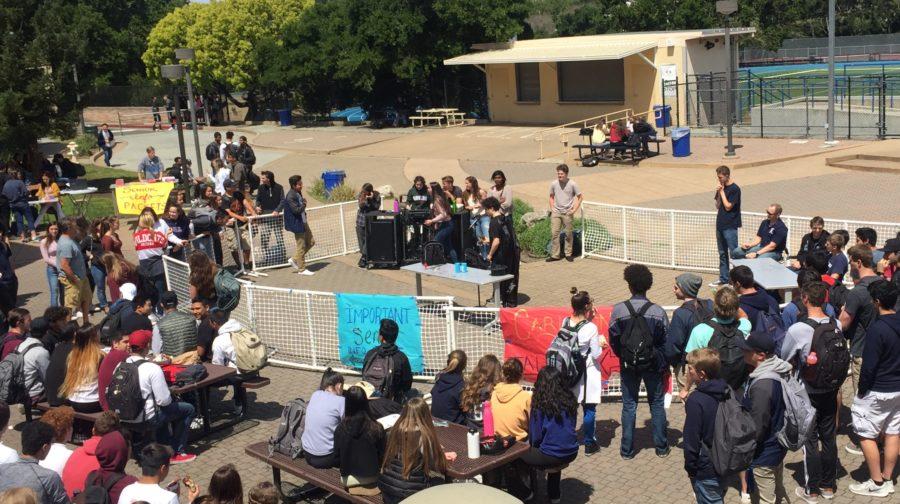 On April 19, students in the quad enjoyed magic tricks during the Carlmont's Got Talent competition.

Carlmont’s Got Talent is a talent show in which groups or individuals can display any sort of talent across the span of a few weeks.

The competition is held in the quad from April 18 until May 5. Sign-ups were held for two weeks in the ASB room starting on March 21.

The entire event is run by the ASB spirit commission.

Sophie Clark, a senior and the supervisor of the commission, is responsible for making sure each contestant has the supplies they need to have their performance run smoothly, such as microphones, tablets, or music.

The Carlmont’s Got Talent competition was originally called Carlmont Idol. This was because the idea to have the competition came around when the show “American Idol” was a big hit, but that show has since been overthrown by “America’s Got Talent” and its vast popularity.

Students do not need to audition for the competition, as anyone is free to sign up, as long as their performance is appropriate.

“The event is set up as a single elimination bracket, with the audience being the judge for which act goes to the next round,” said Theo Korolev, a sophomore and spirit commissioner. “Students are asked to cheer for the act that they believe did best and whichever acts get the loudest responses move to the next round.”

Some of the popular talents from previous years include singing, dancing, and magic tricks.

“Dennis the Magician is always a hit,” said Clark. “ I always love the extremely talented musicians, like Kyle Jung.”

Many believe Carlmont’s Got Talent benefits the school community in great ways by letting many students express themselves and their unknown talents to their community.

“I think Carlmont’s got talent is a great way for students to get involved in the school and create shared experiences with their classmates. Overall, it brings positive energy to our school,” said sophomore Kayla Gustafson.