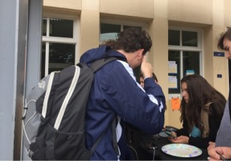 Student competitors are lining up to play basketball…well, a simulation of it at least.

On April 21 and from May 2 through May 5, Carlmont ASB will be hosting an NBA 2k17, also referred to as 2k, tournament. Sign-ups will be outside of the ASB room from April 5 to April 20.

“I like to play 2k because it’s fun and I’d like to think that I’m good at it. So, I play it against others who think they are also good,” said sophomore Tyler Rachel.

NBA 2k17 is a basketball simulation game which was released in September of 2016 and is enjoyed by students of all ages. Students at Carlmont are very excited to be able to participate and show off their skills in this event.

“I chose to sign up because I want to show my friends how I can’t be beaten on the court or on the console,” said Rachel.

NBA 2k17 is the 18th installment of the NBA 2k franchise by Visual Concepts. The franchise has been growing and growing with not only basketball lovers, but with video game lovers nationwide.

“I’ve been playing for about six months and I love it because you get to play as your favorite players in the NBA and you control them,” said sophomore Harry De Voy.

The game’s widespread popularity gave ASB the idea to start the tournament.

“Many students here play the game all the time and have become extremely competitive. The controllers have basically become a part of them,” said ASB member Nicole Turk.

ASB’s goal is to bring students together and make them feel comfortable on campus.

“Our main goal for this tournament is to bring together students who have similar interests and to have them show off their skills and maybe learn from each other,” said Turk.