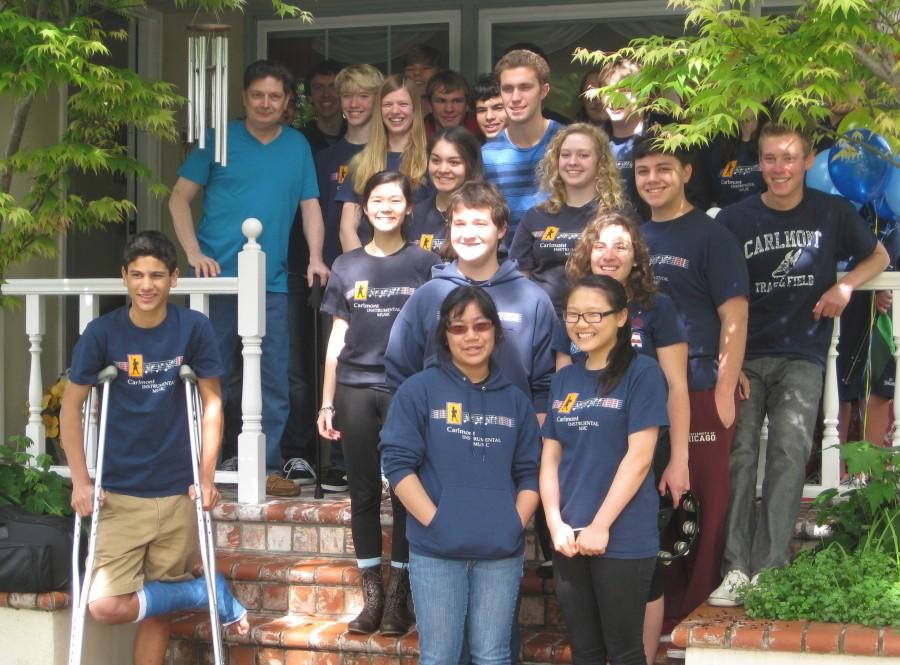 Over 30 students showed up at DaBaldo's home on Sunday.

On Sunday morning, around 30 students from the Instrumental Music program made a special house call to their director John DaBaldo, who is currently recovering from back surgery.

The students met outside of DaBaldo’s house and surprised him by playing a personalized version of Carlmont’s fight song, “The Highlander.” They also gave him flowers, balloons, and cards.

Senior Nicole Galisatus, who planned the surprise with her sister Christina Galisatus, said, “DaBaldo has been out for months, and he won’t be able to join us on tour to Mexico. We wanted to surprise him in a cute, creative, and thoughtful way in order to show him how much we care and miss him.”

Because DaBaldo was unable to go to school, the students brought their music to him.

Junior Omid Afshar said, “I thought it would be a neat way to light up his day during his recovery process.”

Students from each of Carlmont’s bands, orchestras, and jazz ensembles participated.

Freshman Matthew Bowker said, “It felt like [we were] a family. Even though Mr. DaBaldo dosen’t teach me, he makes the Instrumental Music program go ’round and he’s a part of this band family.”

To prepare for the surprise, the Galisatus sisters held one rehearsal during lunch on Thursday, March 27, in which participants sight read the piece, assigned parts, and worked with Assistant Instrumental Music Director Lieven Smart. Although Smart rehearsed with the students, they played without a conductor at DaBaldo’s house.

DaBaldo said, “I was totally overwhelmed by the kindness of my students [Sunday] morning. It tells me that I am very lucky to have such caring, special students. Not only was the Carlmont fight song played beautifully, but I particularly enjoyed the creative words that they added to the song.”

The students replaced the words of “The Highlander” with “J! D! We miss you! DaBaldo! DaBaldo! Get well soon!”

Nicole Galisatus said, “Everyone in Instrumental Music misses DaBaldo for his genuinely kind personality and the positive spirit he brings to the classroom.”

“I am anxious to get back to school. It is hard not being able to be at school with my students, but I know that they are in excellent hands with [Lieven] Smart,” DaBaldo said.

Although he will not return to school in time for the spring tour, DaBaldo hopes to be back within the next month.