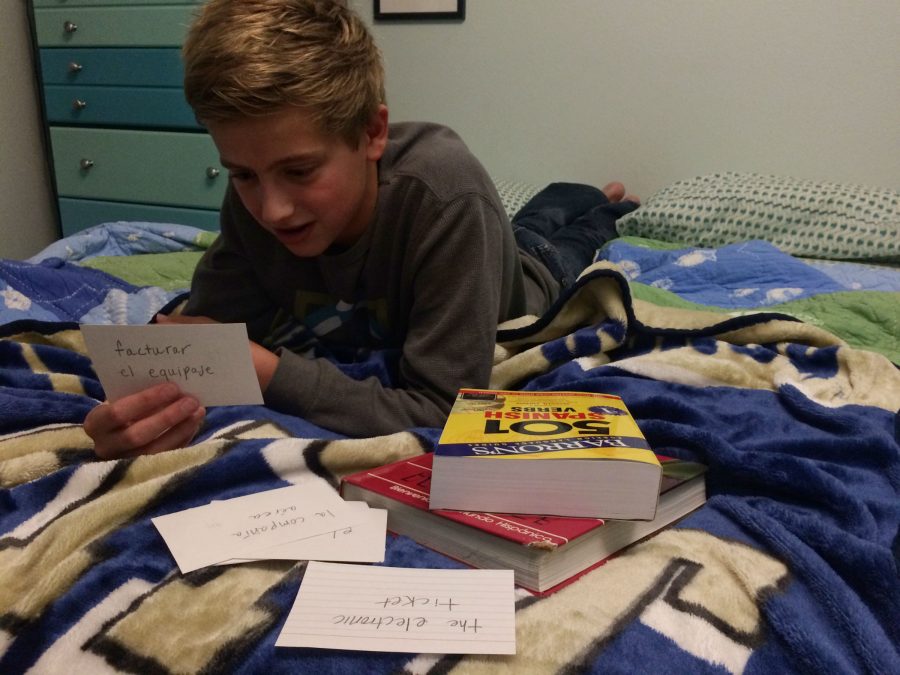 Freshman Aidan Truel studies a deck of flashcards with Spanish vocabulary about airports.

It can take up to 2,200 hours to learn a foreign language. It takes much less time to forget it all.

Many high school students study a language for the minimum college requirement instead of studying with the intent of becoming fluent in the language. These students are often discouraged from the language or uninterested in learning it.

Leah Auyoung is a junior who is currently enrolled in Spanish III and believes that the courses should be a choice.

“Foreign languages should not be required in high school. Those who feel that the language would not benefit them and their career path shouldn’t have to take it. They could spend that period on a subject they enjoy, such as doubling up on a science or English,” said Auyoung.

In California, two years of a foreign language are required to get into a UC or CSU. Even with the requirements, only 7 percent of Americans fluent in a non-English language actually learned that language in school, according to the 2006 General Social Survey.

Some students feel that foreign language classes could be replaced with more enjoyed electives, but some adults believe that they are essential because of their use in a wide array of careers.

Criminal defense investigator and Carlmont parent Kathryn Zorb finds her lack of experience with foreign languages a challenge for her job.

“My job is interviewing witnesses or victims to crimes, and unfortunately a lot of times the people that I talk to speak a foreign language, so anytime I need to speak to somebody who speaks Spanish or any other language, I have to hire an interpreter. If I knew Spanish, it would benefit the county from a financial perspective, and my clients from a personal perspective because I would be able to get a better interview if I could speak to people one on one,” said Zorb.

Zorb took Spanish in high school for four years and was fluent by senior year. She didn’t know that she was interested in taking a language until after her first year when she only took it because she had to. After high school, however, she forgot much of what she had learned.

“Sometimes with kids, you have to make something a requirement just to give them a taste of it. It can actually open up their world into something that they may not have even thought that they were interested in. I’m okay with [foreign language] being a requirement, but just for one year,” said Zorb.

Some adults think that being passionate about a language is very helpful in learning it.

Ana Aljuri, a multilingual lawyer from Romania, said, “Maybe because I really love languages I was more open to it, and I found it easier to learn.”

Others also believe that foreign language is easier for those who are interested in it.

“For any subject really, if you invest the time and you care about the subject, your mind is more willing to learn and apply it to the outside world,” said Auyoung.

Even for those who are passionate about foreign language, it is easy to get discouraged.

“When I came to the states, I was 13, and I was too embarrassed about my accent so I didn’t say anything. I began to understand quickly, but I spoke much later. I think that was confidence-related,” said Aljuri.

“When I was around my kids or people who don’t know sign language, I would feel like my signing was really good. Then when I would get around my sister and her friends who are deaf and who sign, they would just laugh at me because my signing to them was so bad,” said Zorb.

Some students believe that there are ways to promote an interest in foreign languages and to inspire students to take it longer than they are required to.

“If we knew the positive aspects of being fluent in a foreign language, it would encourage more students to learn,” said Auyoung.

It is easy for students to neglect their foreign language after high school. In order to prevent it from being a waste of time, it is necessary to implement more enjoyable methods for students so they remember the language.

Zorb said, “Foreign language is definitely one of those things where if you don’t use it, you lose it.”