Students vote in a mock election 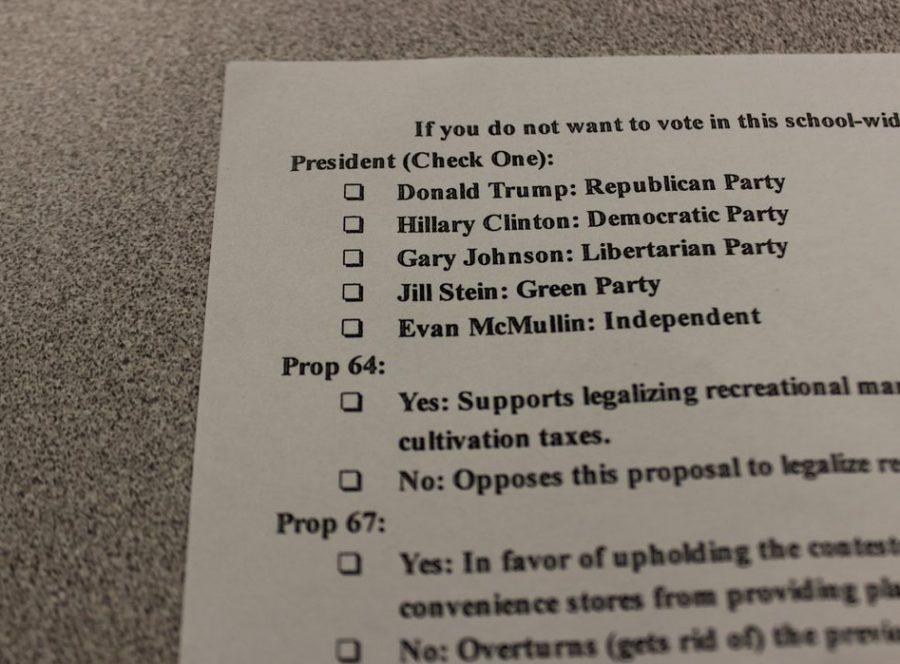 Among the choices for President are the Democratic and Republican nominees; Hillary Clinton and Donald Trump.

With the presidential election on the horizon, many students are forming opinions about the various candidates and propositions that are at stake.

In the spirit of democracy, Carlmont’s ASB organized to conduct an election in which students voted on several political measures in their respective history classes. Teachers and staff members were also given the opportunity to vote.

The election was planned by the Human Relations commission in ASB’s Service Council, who will also count the final ballots.

“We decided to create an election at Carlmont because we thought that students would like to learn more about the political demographic. They also get to experience how it feels to contribute to community decisions,” said 11th-grader Jade Sebti, the commission’s supervisor.

Some Carlmont students responded positively to the commission’s intentions.

“I liked that students were able to share their political opinions, even if it was anonymous. I learned about the new propositions, and I think other students also benefitted from the election because it made government issues more personal to us,” said sophomore Manon Llorach.

The ballot consisted of choices for a presidential candidate, as well as denying or approving the state propositions for the legalization of recreational marijuana, the continuation of the death penalty, and the banning of plastic bags at grocery stores.

Eleventh-grader Miguel Encarnacion voted to approve the legalization of recreational marijuana for users over twenty-one years of age.

“I feel like so many people already have easy access to [marijuana], and there haven’t been several major downfalls from the drug, so I feel like if it was made legal, it would lessen legal tensions for a lot of people,” said Encarnacion.

The election’s results will be released later this week by ASB’s Service Council.

“It’ll be interesting to see how our results compare with the national and statewide results. We hope that the students have taken the vote seriously, or that the number of serious voters outnumbered the number of voters who didn’t take the election seriously so that we could have accurate results,” said junior Human Relations commissioner Liz Boman.