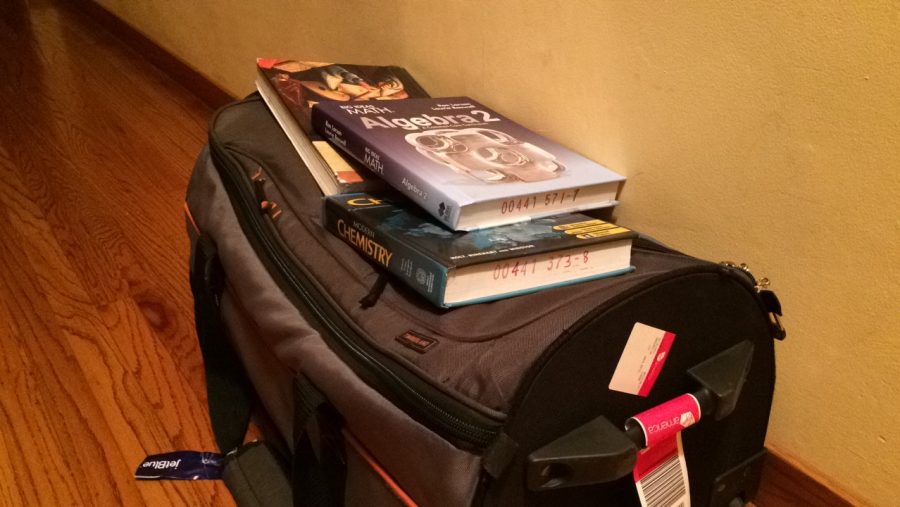 Baggage and textbooks waiting to be taken to the airport for a semester abroad.

For many high school students, the decision of where to go to college is hard, as there are many different options. One of the most difficult is whether or not to study abroad, in a culture and language different from your own.

Studying abroad pulls the student away from their families, and they are forced to face cultural and linguistic differences. On the other hand, students are moved out of their normal comfort zones and often benefit from experiencing new types of education.

This is where personal experience comes into play.

Krystal Burns, who has been an English school teacher in both South Korea and the United States, studied in Chile for the first half of her junior year in college. Burns said she would take the option to study abroad again in a heartbeat because her entire experience was wonderful.

“It was great to improve my Spanish, get to know a new culture, travel, see so many interesting and gorgeous parts of the world, and meet some wonderful new friends,” said Burns.

Although the experience allowed her to these things, it also proved to have its challenges for Burns.

“I also signed up for a theater class since I was a dramatic art major. The class was called acrobatico. I didn’t realize until the first day that this was part two of an acrobatics class. I was wildly underprepared,” said Burns.

For Anika Huibers, an English-speaking high schooler in South Korea, the biggest problems she experiences while studying abroad are also relating to language and culture barriers. Although she is in an English speaking school, it has been difficult for her to communicate with Koreans and to adjust to the different lifestyles held by the Koreans.

“In Korea, it’s sometimes hard for you. For example, when you get put in group projects with only native Koreans and they speak Korean between each other. Cultural differences are always hard to overcome, but as soon as you open your mind to new ideas and concepts, they are easy to deal with,” Huibers said.

Cultural barriers as well language obstacles are the main problems that travelers face. However, putting oneself into a school with its own integrated immersion program can make the whole process easier and simpler.

Other things to consider when thinking about studying abroad include the cost, transportation, and housing.

On average, it can cost up to $7,000 for expenses such as housing, food, visas, etc. when in a different country, not including tuition.

However, an IES study found that 97 percent of college students who studied abroad found a job within twelve months of graduating, double than that of those graduating in their home countries. Along with that, students who have studied abroad have starting salaries that are roughly 25 percent higher than those who did not.

Employers believe that students who have studied abroad are more likely to have desirable skills such as cross-cultural communication skills, cultural awareness, maturity, and flexibility.

“More and more employers are seeking out culturally aware and experienced employees who can work effectively in an increasingly global workplace,” said IES Abroad.

Studying abroad has its pros and cons and, in the end, it is a personal decision.

“It is an incredible opportunity. One of the best parts is seeing how different other parts of the world can be, and experiencing life as a foreigner. It’s important to experience not being in the majority,” Burns said.

Studying abroad is a unique experience that can only be done during a small part of your life, and for the many that take the leap, it is a very enjoyable adventure.