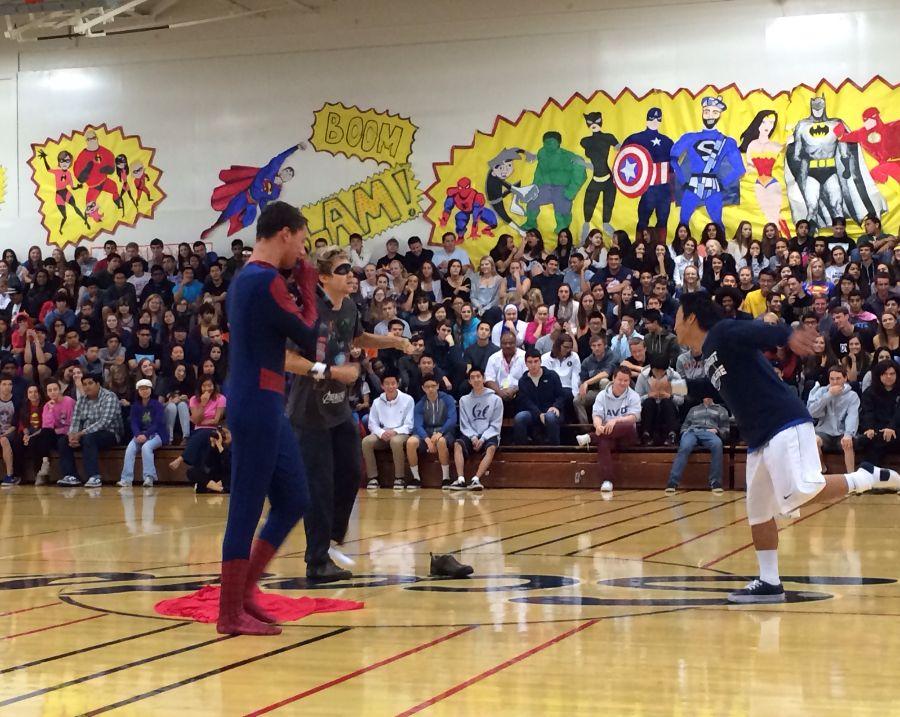 Drumline shakes away the competition during the finale of Carlmont Cup at the Homecoming Assembly.

ASB fought for truth, justice, and school spirit during the Homecoming Assembly on Oct. 16.

A variety of superhero-themed activities were showcased during the assembly.

“We have themed assemblies now, so since today’s theme is superhero, we decided to do that. All the balloons are superheros, we have amazing superhero decorations, and all the performers are incorporating superheros into their performances, especially Drumline and Jazz Band,” said junior Annie Klups, head of the Assembly Committee in the Associated Student Body.

Jazz Band performed “The Incredibles” while wearing superhero masks, and Drumline took the idea of performing a step further by reenacting superhero combat while playing their music.

Even the transitions between acts were created around superheroes as “Carlmont Criminals” sophomore Kimberly Lane and junior Gaby Dimick kidnapped junior Jacob Segal, and superheroes Spencer Stewart, a junior, and Elias Sebti, a senior, saved the day.

“My favorite part was when Jacob Segal was being dragged on the ground across the gym by the villains. It was really funny,” said sophomore Noah Shamsai, a member of Carlmont Drumline.

As “pow” and “boom” signs were hung and performances were rehearsed with the assembly approaching, there appeared to be no signs of last-minute stress from the ASB members.

“We have everything planned and at this point it is all up to the performers. This is the first time I haven’t been nervous. Everything got set up early and all the performers are great and ready and everything’s going really well,” said Klups.

The spirit continued to soar when Jazz Band came back and beat Drumline in the finale of Carlmont Cup after Drumline’s original victory was invalidated.

“We did well overall but apparently when we used our feet during the sleeping bag race it was cheating, so we’ll have to do it again anyway,” said Shamsai after the first assembly.

The audience appeared to be engaged in the assembly as they clapped, cheered, and danced along to Choir’s medley of songs, varsity football’s introductions, and the dance team’s performance.

From the opening bagpipe song to the ending Drumline beat, Carlmont students were treated to an hour of entertainment.

Before the assembly, sophomore Daniel Wehara, a member of Drumline said, “I hope the audience will be touched, and hopefully we will arouse some mirth.”

Although the acts moved consistently, ASB members faced a few challenges along the way.

“A challenge we faced was communicating with all of the different groups so that everything ran smoothly,” said Tori Miranda, a member of the assembly committee in ASB.

ASB was not the only group who had to work extensively to meet the assembly deadline.

“For drumline we have intense practice hours: early mornings, everyday, and weekends. It is a lot of preparation,” said Wehara.

Superheroes may seem invincible, but even they make mistakes.

There were a few minor unintentional pauses, such as when the pedometer headbands did not fit during the Carlmont Cup finale, or when a drum stick fell out of Kyle Jung’s hand.

“It went pretty well overall. There were a few little mistakes from everyone, but nothing big,” said Shamsai.

With the last “Boom” and “Pow” from the Drumline, the superheroes of Carlmont retired until called upon by the citizens of Carlmont once again.