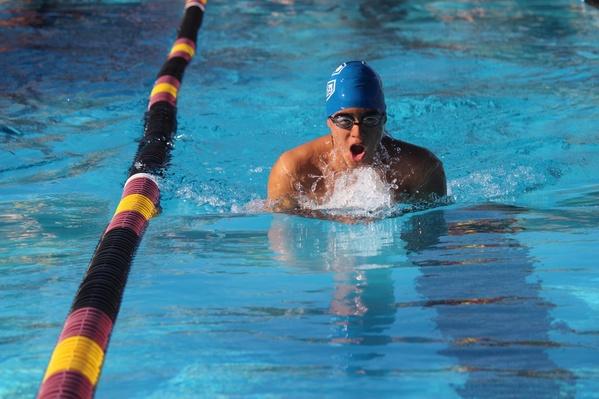 Carlmont’s swim team competed and lost in a meet against Menlo-Atherton (M.A.) High School on March 29. The overall score was 415-293.

The varsity boys won with a score of 98-72, while junior varsity girls had a closer meet ending with a loss of 103-83. Boys junior varsity and girls varsity experienced more dramatic losses with scores of 120-50 and 120-62.

Despite the tough losses, Carlmont swimmers were content with their team spirit.

“I think we tried our hardest, but M.A. is a tough team to beat. Losing doesn’t feel like a loss when you’re with your friends and having fun cheering on your teammates,” said freshman Emma Simmons.

Swim meets are based on a point system. A team can earn a maximum of ten points from a single race heat, and relays offer up to 14 points. There are 46 events total in the meet.

Menlo-Atherton is the only school that Carlmont lost a meet to last season, so there was a higher amount of pressure to win compared to those of other meets.

“I was more nervous because there was more pressure than usual to do well. We knew coming into it that M.A. would be the strongest team we’d face in the season, so we just wanted to put up a good fight and get as many points as we could,” said junior Neda Sohrabi.

The first event was the 200 medley, with JV Girls diving first. They dominated the first heat, creating a positive attitude for the team.

Both teams raced well, using impressive stroke technique and efficient turns off of the walls. The M.A. Bears, however, had skilled swimmers who challenged the talent of the Scots. Their stamina was slightly better than that of Carlmont swimmers, and they often won races by tenths of a second.

Despite the results of the meet, Carlmont students stood by the lanes every event, cheering on their teammates.

“Our swim team is one of the best teams in the league. The score doesn’t matter as much as the overall experience and team spirit. We have such a feel-good atmosphere, and I like to know that it will continue into the following years,” said Kelly.