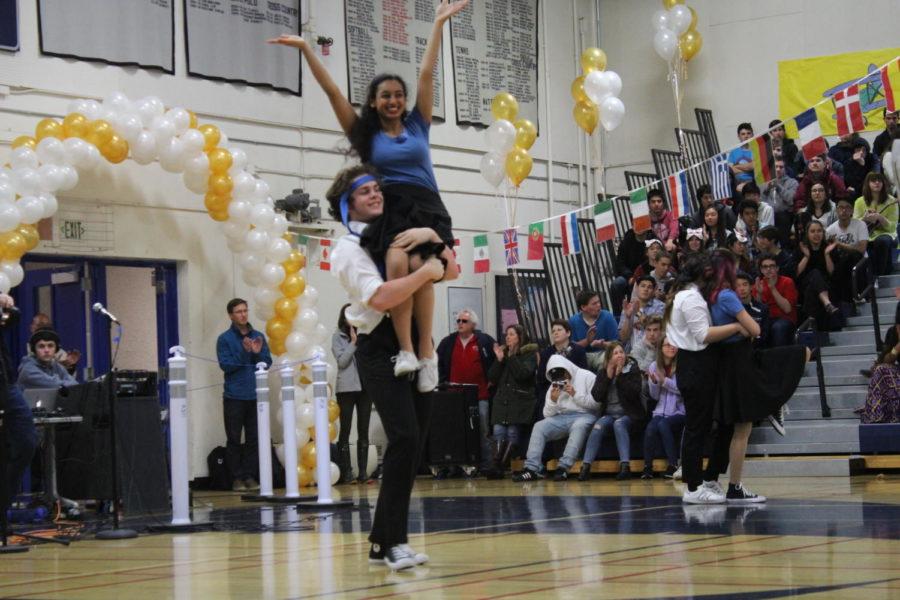 Two members showcase a trick for the audience at the end of Swing Club's performance.

Carlmont students were able to get a taste of the 1940s at the annual Heritage Fair assembly on March 1.

Swing Club’s performance was in full swing as feet kicked and hands waved along to jazzy music.

“In Swing Club, we dance to music that is typically from the 1920s to the 1940s. We meet during lunch on Thursdays in room D2,” said Spencer Stancil, a senior and co-president of Swing Club.

Stancil runs the club with Carrie Welter, also a senior.

Every year, Swing Club has the opportunity to perform in Carlmont’s Heritage Fair assembly.

The process of recruiting and teaching members a dance for Heritage Fair takes up the majority of the school year. Swing Club starts preparing for the Heritage Fair assembly as early as the summer before.

“Carrie and I started choreographing over the summer, and we worked on it through October or November. Our first few meetings of the year are about encouraging students to join and get them introduced to the club and swing,” said Stancil.

In the days leading up to the assembly, Swing Club met during lunch meetings, after school, and on Sundays in order to solidify their dance moves.

“Up to the assembly, it becomes about making sure everyone knows their choreography and everyone has a partner and a trick. Tricks are one of the hardest things to work on for dancers, especially if they’re new to swing, and everyone has different abilities. A lot of rehearsal time is spent figuring out what works for each person in the club,” said Stancil.

Although the thought of dancing intimidates some, the club has helped some students overcome that fear.

“We all help each other – everyone’s there to help you figure it out. Dancing is fun; if you mess up, you just laugh about it. We’re just here to have fun,” said freshman Artie Ram.

When it was time to perform, club members were both nervous and excited as they danced in front of their classmates.

“I personally thought Swing Club did a great job onstage. They all are good at dancing, and some of the pairs did really good tricks,” said Kevin McGee, a senior.

Swing Club welcomes any student with or without dancing experience.

“Swing Club is a fun way to experience something new. I like trying out new things, and dancing is a challenge for me, so I figured I should try it out,” said Hanee Waykoko, a junior.