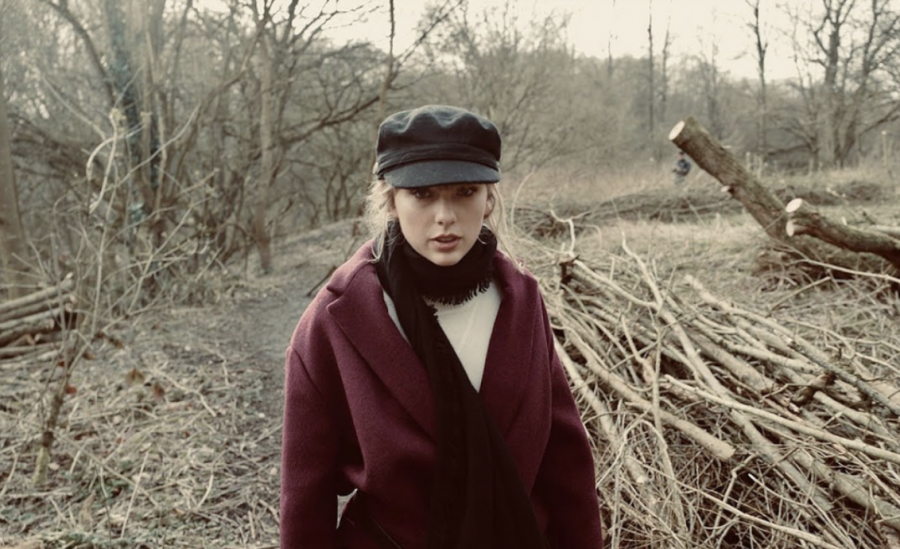 Taylor Swift boasts muted colors in the aesthetic for her new album, "Evermore."

Singer-songwriter Taylor Swift has done it again: and by “it,” we mean release a surprise album for the second time in five months. Her ninth studio album, “Evermore,” follows July’s “Folklore,” demonstrating how, in certain cases, pandemic isolation has allowed for inspiration to strike twice. The last song written for the album, “Happiness,” was completed only a week before release.
Evermore
The album starts off on a high note with the lead single “Willow,” which echoes the folksy vibes of her 2013 song “Safe and Sound.”

“Life was a willow, and it bent right to your wind / But I come back stronger than a ‘90s trend,” she sings.

And it’s true: although one might have assumed Swift’s career would calm down with 2019’s “Lover,” “Folklore” garnered the most non-consecutive weeks at no. 1 on the Billboard charts since 2016’s “Views” by Drake.

While Jack Antonoff was heavily involved in “Folklore,” he only wrote two songs on “Evermore,” one of which being “Gold Rush.” The track builds to a stunning chorus as Swift compares vying for her lover’s attention as similar to the search for gold.

“My mind turns your life into folklore,” she sings in a tongue-in-cheek reference to her album from earlier this year.

“No body, no crime” parallels The Chicks’ “Goodbye Earl.” The all-female country band was featured on Swift’s “Lover.” This song, like “Goodbye Earl,” channels genius storytelling to paint a tale of murder, betrayal, and passion.

In the YouTube Premiere chat, Swift noted that her favorite lyric from the album was “Never be so kind / You forget to be clever / Never be so clever / You forget to be kind.” This was the first verse from the 13th track, “Marjorie,” inspired by her late grandmother. The track also included background vocals of her grandmother, Marjorie Finlay, singing. A young Swift noted in an early interview that Finlay was one of her first inspirations.

“Marjorie” complements the 13th track on “Folklore,” “Epiphany.” Swift revealed in the Long Pond Studio Sessions that “Epiphany” was sung through her grandfather’s perspective. Dean Swift fought in World War II, referenced in the first part of the song, and he was also pictured in the “Cardigan” music video. She then relates the next part of the song to the struggles of essential workers during the pandemic.

Swift’s fifth tracks are infamous for their heartbreaking storytelling and imagery; “Tolerate It” is no exception. It portrays the idea of loving someone that gives you no attention, with lyrics like “I know my love should be celebrated / But you tolerate it.”

“I decided on track five because of the lyrics of ‘Tolerate It’ and how it’s so visual and conveys such a specific kind of hurt,” Swift said.

This contrasts Swift’s current relationship. Her boyfriend, Joe Alwyn, co-wrote five songs for “Folklore” and “Evermore” under the pseudonym “William Bowery.” Swift revealed the identity of Bowery during the Long Pond Studio Sessions.

Swift showcases her ear for a strong melody with “Long Story Short,” where she builds on 2017’s “Getaway Car” by elaborating on how her relationship with actor Tom Hiddleston was an escape from DJ Calvin Harris.

This could also be a nod to “Wonderland,” a track from the deluxe edition of “1989,” with lyrics “Took a wrong turn and we / Fell down a rabbit hole.”

The instrumental track follows a similar melody to the “Folklore” track, “The Last Great American Dynasty,” about Swift’s Rhode Island estate on a cliff along the coast. In “Long Story Short,” Swift references “climbing up the cliff.”

Swift blends personal anecdotes and stories from her imagination in this sequel to “Folklore.” This album proves that Swift isn’t going anywhere: as she gears up for re-recording her first five studio albums, there’s no doubt plenty of more surprises in store.

Easter Eggs
Swift clued fans into the “easter eggs” in the “Willow” video before it premiered on YouTube.

The video picks up right where the “Cardigan” video left off, with a soaking-wet Swift in a stone cabin.

An earlier scene in the video portrayed a group of women that turned out to be witches, which parallels “Mad Woman” from “Folklore.” In “Mad Woman,” she sings, “Women like hunting witches, too / Doing your dirtiest work for you.” This also reflects in 2017’s “I Did Something Bad,” where she croons, “They’re burning all the witches, even if you aren’t one.”

This is not the only nod to “Reputation,” as a clip from the video has a painting with a snake, a symbol from that album. Additionally, one of Swift’s costumes during the video resembles a cloak she wore in the “…Ready For It?” video.

The characters presented in the video have a scene of their younger selves, referencing “Seven,” a track from “Folklore.”

Finally, “Mirrorball” was incorporated in the “Willow” video, as Swift visually represented the lyrics “And they called off the circus / Burned the disco down.” In the Long Pond Studio Sessions, she revealed that this verse alludes to her tours being canceled amid the pandemic.

Among “easter eggs” in the video, Swift left clues to the release of the album.

A picture of Swift was posted in November, with pictures of ivy, a willow tree, and a caption similar to the one that clued fans into “Folklore,” posted in May.

She also tweeted in early December, to which fans noticed the first letters of the sentences spelled “CST” and the last letters spelled “EST.” The tweet also referenced a “willow tree” and “midnight.”

The day before the announcement of “Evermore,” Swift used nine evergreen tree emojis in a tweet, referencing the release of her ninth studio album. That day, she also posted a story on Instagram, using the caption “‘tis the damn season,” the title of her fourth track.

If there’s one thing for certain about Swift, it’s that she knows how to keep her fans on their toes.