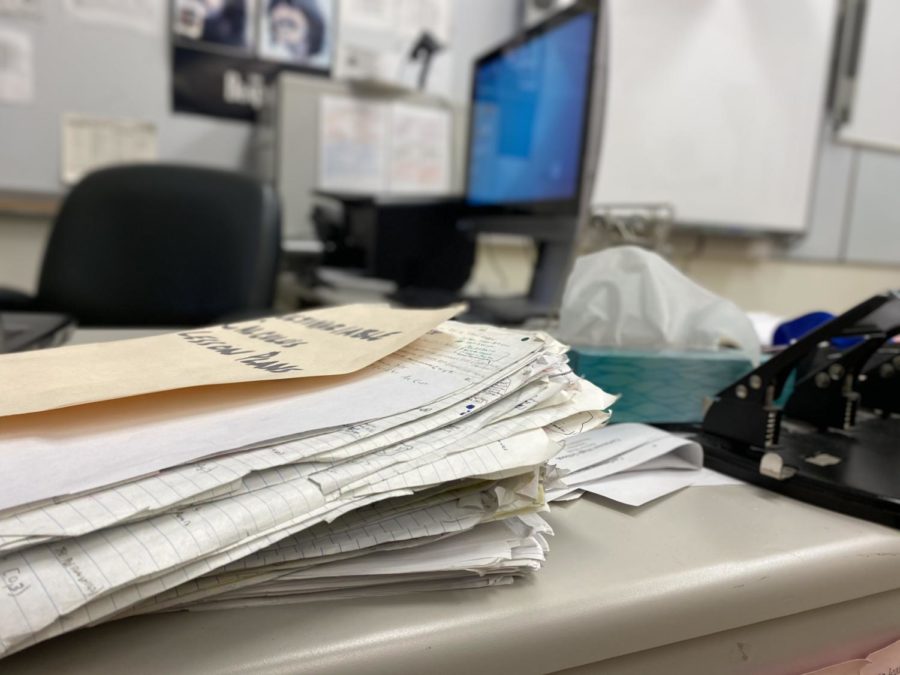 Despite the work piled up on his desk, math teacher Michael Skrable shows up ready to educate each and every day.

Teachers are, in a sense, the unsung heroes of the child-rearing process. High school teachers, in particular, play a very unique and essential role in our society, working to educate and prepare students for the real world.

In California specifically, the average salary for a teacher is around $47,000 per year, thousands of dollars less than the national average of approximately $56,000. Despite being on the lower end of the spectrum in terms of income, many teachers, work hard for various reasons besides money.

For example, math teacher Robert Tsuchiyama said that his students are what motivate him to teach.

“It’s not just a fake answer, it’s what makes teaching. You want to come back every year and meet new students; it’s not just the math,” Tsuchiyama said.

For others, however, being able to teach what they are most passionate about fuels their love for the job. Physics teacher Alexander Wallace shared this sentiment.

“It’s probably the content,” Wallace said. “The fact that I love physics is definitely the best thing about teaching.”

In contrast, some teachers end up in the job after deciding that others weren’t right for them. Math teacher Michael Skrable explained that teaching wasn’t originally his intended career path.

“When I was younger, I had all my life already planned out. I was going to go to Stanford for my undergrad and get my master’s at Harvard and make a lot of money as a Wall Street analyst. But after working once for my dad, I decided that it wasn’t the job for me,” Skrable said. “After graduating from Stanford, I decided on teaching high school math because it was one of my favorite subjects in school.”

Skrable put forth that he doesn’t make as much money as he would have as a Wall Street analyst. Likewise, Wallace explained how he made more money working other jobs when he was younger.

“To give you an example, the most I’ve ever made in my life was when I was 19 years old. I was working in insurance, and I kind of have to accept that I will never ever make as much money as I did before,” Wallace said.

However, most teachers can agree that they find the reward of teaching comes from the ability to watch their students grow and learn, knowing that they are helping society every day when they do their job. Tsuchiyama says that this is what makes the job special.