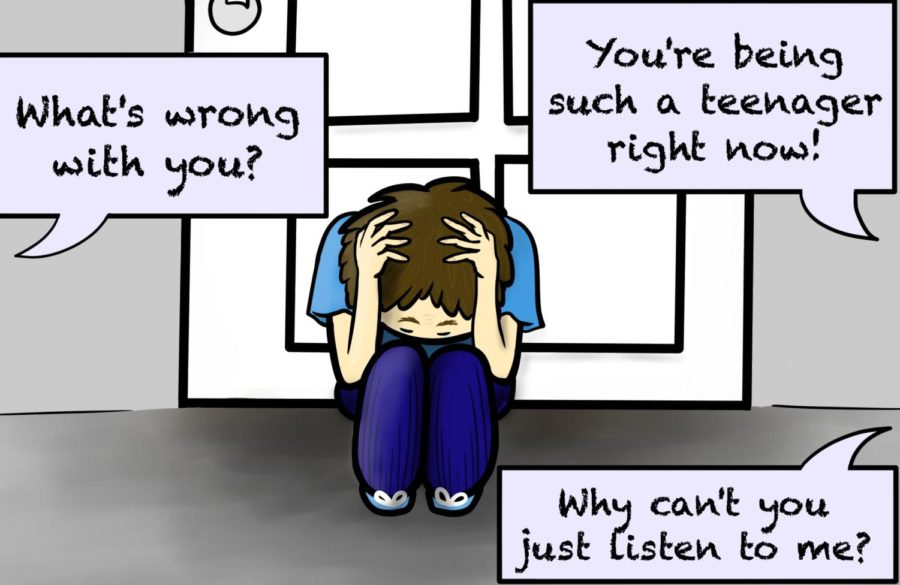 Parental expectations of typical teenage behavior can often overwhelm a teenager, causing them to assume that they have to conform to stereotypes.

Her words echo down the hallway, followed by the slam of a bedroom door and the distinctive click of a lock.

Her parents are left gaping at the barrier between them and their teen child, wondering, “Where did we go wrong?”

Does this sound familiar?

This is how the media presents a typical teenager: temperamental, ungrateful for their parents, and emotional over insignificant things. It’s what parents expect, and it’s how teenagers are treated.

Over time, society developed a name for this scenario: the emotional teenager stereotype.

The emotional teenager stereotype oversimplifies teenage behavior, casting adolescents off as irrational and moody. But instead of fostering a healthy, strong relationship between parents and teenagers, it often misleads parents and creates misunderstanding.

As a result, parents sometimes seek to “fix” their child, rather than understand them.

“At times I feel very misunderstood by my parents, and I feel like it’s because they fail to try and see things from my perspective,” said St. Ignatius College Prep sophomore Ethan Sam. “If our parents would listen to our point of view, I believe they would have an easier time trying to understand us.”

The adolescent years are a time of change and a time when teenagers are looking to develop their own identity. This struggle to establish oneself often results in conflict between parents and children, a conflict that society developed a stigma around and actively discourages.

According to The Whole Child, a nonprofit mental health contractor, society can cause parents to view a perfect parent-teen relationship as one without conflict because of the negative aura around fighting: “The rebellious teen may add to parents’ feelings of uncertainty about themselves. ‘Good’ parents, after all, would not be having this struggle with their child, they think.”

Parents can often find it difficult to provide support to a teenager, especially when the adolescent refuses help or lashes out at their parents unexpectedly.

An article by the Massachusetts Institute of Technology (MIT) Work-Life Center that highlights this challenge said, “The challenge for parents is to provide this support at the same time that adolescents are working to establish their own values and identities — efforts that often manifest as increased criticism, emotional distancing, and withdrawal from family activities.”

Because of stereotypes, parents can be unprepared for conflict with their teenager, and regard it as a sign of an imperfect relationship, one that the parent needs to fix.

In spite of the negative connotation surrounding parent-teen fighting, psychologist Terri Apter, Ph.D., argues that this conflict is necessary, and even beneficial, to the relationship.

“Teens get so heated in arguments with parents because so much is at stake; they are fighting to change their relationship with a parent, to make a parent see that they are not the child the parent thinks they know,” Apter wrote on Psychology Today. “The adolescent wants to shake their parent into an awareness of the new and exciting person they hope to become.”

This need for a new identity is hardwired into the teenage brain and is a necessary step in the road to becoming an adult. According to a ScienceDirect study, the teenage brain is designed to enhance independence and self-sufficiency through conflict.

The resulting small periods of fighting can strengthen the relationship between parents and adolescents and help build mutual understanding in the future.

“Parents really have to create a safe space for their children to show who they are and what they’re going through. And with teens, especially with things that have been hard for a while, it can take time,” said parent educator Julie Johnson. “But eventually, teenagers will begin to open up and parents can foster that bond with them.”

Johnson references the idea of a safe space, a concept that becomes especially important to the development of a strong relationship between parents and children. The generalization of adolescent behavior is often harmful to teenagers, who need the support and understanding of their parents during this tumultuous time. Bullying, peer pressure, and school-induced stress can cause a teen to look to their parents for guidance and help.

Sadly, stereotypes can cause parents to give up on their children and dismiss their teenager as overly emotional.

As freshman Nefeli Tsangaropoulos demonstrates, the relationship between parents and teenagers is a two-way one. If the parent does not care or gives up on the child, then the bond weakens and can even fade entirely.

“Yes, most of the time the stereotype of teens hating their parents is true, but also sometimes the parent gives up and stops caring for the kid at some point,” Tsangaropoulos said. “If the parents don’t care, they won’t try to understand their child.”

A bond weakened by stereotypes is more influential to a teenager’s actions than many realize. It puts adolescents at higher risks for acts involving smoking, drinking, drugs, and suicide.

In a study done by Christy Buchanan, a professor of psychology at Wake Forest University, Buchanan found that when parents expect teenagers to take risks, teens feel influenced to engage in more dangerous acts to conform to parental expectations.

“These expectations matter above and beyond the child’s actual behavior,” Buchanan said. “By thinking risk-taking or rebelliousness is normal for teenagers and conveying that to their children, parents add to other messages from society that make teenagers feel abnormal if they are not willing to take risks or break laws.”

Though the emotional teenager stereotype attempts to create a one-size-fits-all scenario, not all parent-teen relationships are exactly the same. Sophomore Andrea Brehovska points out the nuances of the relationship between parents and teenagers, details that are often overlooked by the oversimplified view of adolescents.

“I feel like, yes, some teens do hate their parents and some do feel misunderstood by them, but other kids love their parents more than anything in the world. Some teens without parents long for parents, so I don’t think the stereotypes are true,” Brehovska said. “It really depends on your situation.”

Stereotypes not only skim over the differences between families but also rarely acknowledge other causes of conflict between parents and adolescents beyond teenage moodiness. However, University of California, Los Angeles freshman Alyssa Fong brings to light other reasons for fights between parents and teens.

“Honestly, even as I’ve changed over the years, I’ve always believed that my differences with my parents stem from a lot more than ‘teenage angst’ and the stereotypical ‘they don’t understand me’ phase,” Fong said. “I don’t struggle to get along with my parents because they won’t buy me expensive gifts; the tension comes from deep personality differences and opposing approaches to life.”

Though the media continues to present teenagers in a negative, oversimplified light, research delving deeper into stereotypes have found the societal image of teenagers to be misleading.

“The stereotype that teenagers spend all their time holed up in their rooms or hanging out with friends is, indeed, just a stereotype,” said Pennsylvania State University professor Susan McHale. “Our research shows that, well into the adolescent years, teens continue to spend time with their parents.”

McHale isn’t the only one to have looked into the emotional teenager stereotype. In a study by ChildTrends, researchers found that although there was a small decrease in positive feelings of children towards their parents during the adolescent years, the dip was “fairly modest” and leveled out after a few years.

Though researchers and institutions such as McHale and ChildTrends have disproven the negative views surrounding adolescence, it continues to prevail in modern society and weaken parental bonds with teenagers.

Understanding, rather than fixing, can appear to be a process easier said than done. But once a strong relationship between parents and adolescents is established, they have the capability to go beyond stereotypical views and foster a bond built on mutual understanding.

“Things can get worse before they get better sometimes, but eventually, there will be more cooperation, connection, trust, hope, and happiness,” Johnson said.