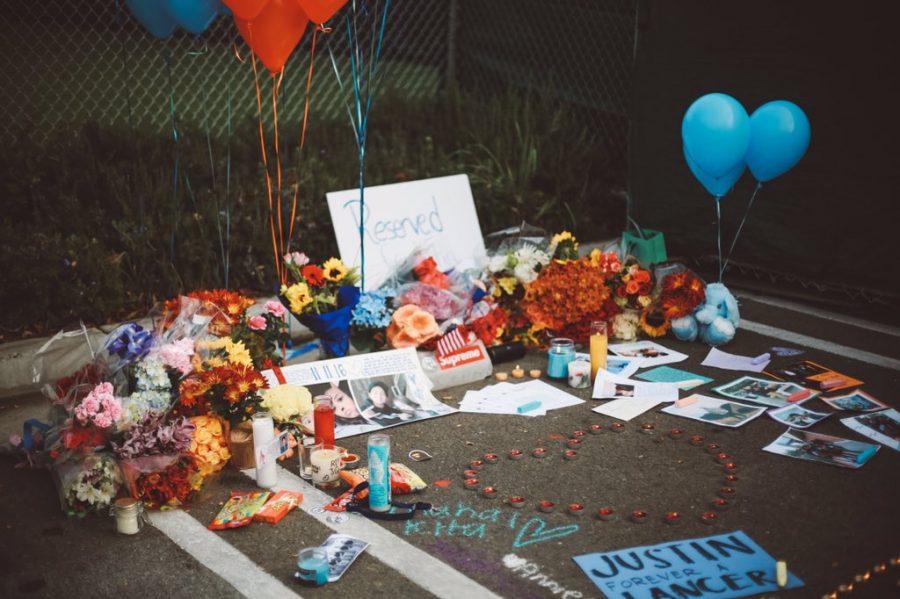 In the Saint Francis parking lot, students created a memorial for Justin Quintos.

On Nov. 11, Justin Quintos, a 16-year-old at Saint Francis High School, died in a fatal car crash in Saratoga, CA.

Quintos was driving with two other friends on Friday afternoon when he lost control of the vehicle and flew into a 50-foot embankment off of Highway 9. The vehicle then proceeded to hit a tree and catch fire.

The two other 17-year-old passengers were able to escape the flaming vehicle and walk away from the crash with only minor injuries. They told the Highway Patrol officers that they thought that Quintos had let his speed increase too much driving downhill.

“They estimated his speed at 50 to 70 mph, the speed limit on Highway 9 between Skyline Boulevard and Saratoga is 30 mph,” said Officer Ross Lee in an interview with The Mercury News.

Lee stated that drugs and alcohol were not suspected to be involved in the crash.

Rodel Quintos, Justin’s father, told Mercury News that the last time he saw his son was after school when Justin came home to grab his gym clothes.

Quintos’ crash is a reminder to all new drivers how important it is to drive safely.

“As a new driver, it is extremely important to take into consideration that one must be safe on the road, especially since new drivers don’t have as much experience and haven’t been in situations where they may have to change or correct their driving in an emergency. What happened recently is definitely a reminder that all new and young drivers, in general, should be careful, especially in situations like this one,” said junior Jimmy Rudger.

Also, Quintos was reported to not be wearing his seat belt which was a contribution to his quick death.

According to Edgar Synder and Associates, in 2002, 43,005 people died in traffic accidents because they were not wearing a seatbelt. If 90 percent of the United States wore their seat belts when driving, 4,200 lives would be saved every year.

“To me, [wearing a seatbelt] is second nature. This is another reminder to wear it all the time because you never know what may happen,” said Rudger.