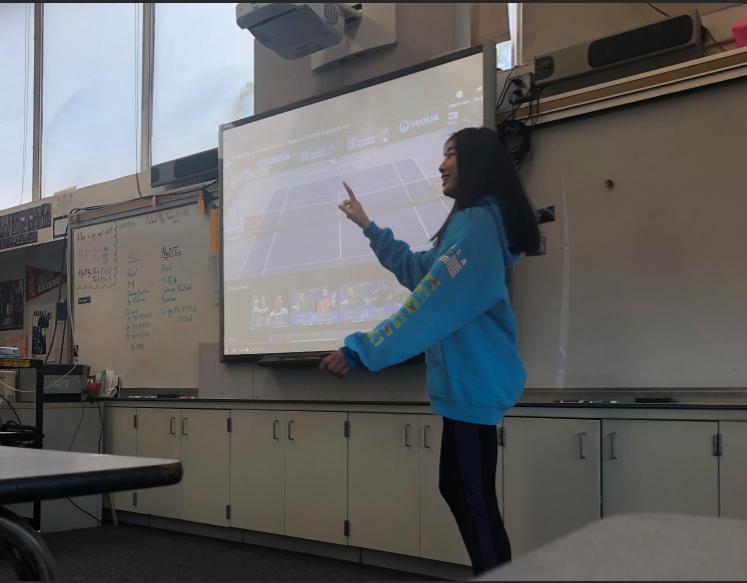 Annika Lin, a junior, leads a game with members of Tennis Club.

Every second and fourth Monday of the month, students gather in room E12 to learn about strategy, teamwork, and most importantly, tennis.

Annika Lin, a junior, is president of the club, with Vice Presidents Lily Gittoes and Isabella Reeves, who all help to run the meetings.

Though this is just the second year of Tennis Club, they have made alterations from last years club which they say has helped to broaden their club even more.

“Last year it was called Girls Tennis Club, but this year we changed it to just Tennis Club because we wanted to make it more inclusive for students,” Lin said.

Although Lin does play for the girls tennis team at Carlmont, you don’t need to play tennis to be in the club.

“I’m interested in tennis and some of my friends are in the club. I come as often as I can,” said Sarah Luna, a sophomore, who does not play tennis.

The activities at each meeting vary week to week. Sometimes they watch videos or talk strategy, and other times they have contests or games.

This week, their meeting consisted of watching videos of pro-tennis matches. The video would be paused at certain points. Students would then give their ideas and opinions on where they thought the ball was about to be hit and why.

The activity was used to teach strategy and quick thinking, a skill used a lot in tennis.

Some of the time, the skills taught during the meetings are applied during the occasional sessions on weekends. The sessions are optional but helpful, as it gives some team members more time to work on their skills with their teammates.

The club is overseen by Dan Nguyen, a math teacher at Carlmont, who also coaches the boys tennis team.

Last year, some of the students in the club volunteered to start coaching some younger kids.

“Some of the girls in this club, who also play on the team, and I began giving lessons the team at Sandpiper Middle School,” Lin said. “Their season is from March to April, so we help them then.”

The Carlmont students help students from Sandpiper to become stronger players. In the beginning some students were nervous; however, their confidence grew significantly after more lessons.

Changing their name and expanding their activities has helped Tennis Club grow, but they are always open to new students to come and join.