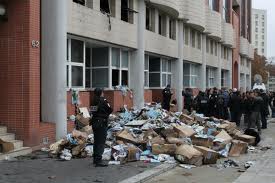 Nearly 15 years ago, America became the target of Al-Qaeda’s aggression against democracy in the Sept. 11, 2001 terrorist attacks on the World Trade Center.

Many terrorist organizations have appeared in Europe since the Sept. 11 attacks, most recently on Jan. 7, 2015 in Paris, France, when gunmen appeared at Charlie Hebdo Headquarters, a french satirical newspaper which had published suggestive political cartoons about the prophet Muhammad.

On the morning of Jan. 7, 2015, two assailants raided and opened fire on a staff meeting at the Charlie Hebdo office, killing 12 people including the editor of the paper and two police officers hired to protect the office, according to The Washington Post.

French President François Hollande declared Jan. 8 a day of mourning, and the Eiffel Tower’s lights were shut off in tribute to victims of the terrorist attack.

Three suspects have been named by the police in the shootings, brothers Saïd and Chérif Kouachi, 34 and 32, and Hamyd Mourad. Since the shooting, French police have been hunting the Kouachi brothers through northern France without success. Mourad, 18, was reported to have turned himself into the police on Jan. 8, according to The New York Times, and was not charged.

Possible motives for the attack were provided by the gunmen when they shouted, “Allahu akbar” or “God is the greatest” after killing 12 and injuring 11 staff members of the controversial newspaper.

According to senior Hiba Dahbour, a practicing muslim, what the Charlie Hebdo staff achieved through their cartoon of the prophet Muhammad is, “not allowed in our religion,” and was perceived as an “attack” on Islam.

The search for Said and Cherif Kouachi took a dramatic turn when the two were cornered by police in a small town, Dammartin-en-Goele, to the east of Paris. According to the police, the Kouachis proceeded to lay siege to offices of a small printing firm, taking five hostages.

At the same time, Paris was experiencing another hostage situation. Amedy Coulibaly was named in the French media as being responsible for holding multiple hostages at gunpoint.

Coulibaly was said by L’Obs newsweekly to be “very close” with Cherif Kouachi, one of the suspected gunmen in the Charlie Hebdo attack. Both Coulibaly and Kouachi have long rap sheets for suspected terrorism, and the two met in Fleury-Merogis prison in 2005-06, according to  The Guardian.

In addition, Coulibaly along with Hayat Boumeddiene were identified by police to be associated with the killing of a french policewoman on Thursday. The killing was originally suspected to be connected to the Charlie Hebdo attacks from the previous day, but no relationship has been confirmed by Paris police.

The international community has responded strongly through social media to the terrorism in Paris. Mario Brey, President of Spain posted on Twitter that he will be visiting Paris on Sunday to demonstrate that “Spain stands with France against terrorism and for liberty.”

“Je suis Charlie” is a movement in reaction to the violence in Paris. People have been propagandizing the saying, meaning “I am Charlie,” in respect for the cartoonists who lost their lives on Wednesday and in outrage against their killers.

On Jan. 11, over 40 European leaders gathered in Paris amongst 1.4 million people in outrage against the reign of terror France has experienced in the past week.

Although far from Paris, Carlmont students are still concerned with the implications of the Charlie Hebdo attacks.

“I think the cartoonists were trying to trigger something, but the shooters didn’t have to be violent in their reaction,” said Dabhour.

Dabhour commented on the unique experience of being called a terrorist solely based on her religion.

“I really don’t like how there has to be an attack on my religion, like how just because a killer is a Muslim, we’re all labeled as terrorists,” Dabhour said.

“It’s like every other race or minority just because one person does something doesn’t mean you have to put a stereotype on everyone else,” Dahbour continued.

The Charlie Hebdo attack has been called an “attack on democracy” by the Western culture.

“What they were trying to do is limit freedom of speech, while prioritizing freedom of religion,” said Waller.

On the contrary, Dabhour said Charlie Hebdo’s cartoon of the prophet Muhammad was received by Muslim culture as a direct attack on their religion.

“I believe in freedom of speech, but when you’re talking about someone’s race or religion, its just a trigger. Charlie Hebdo knew their cartoon was wrong,” Dabhour said.

“I don’t think journalists should make fun of races period. There’s other things to talk about like news, and stories,” Dabhour concluded.

Junior Marion Demailly provided an alternative perspective on the terror in France.

“People are really upset about it there,” said Demailly.

With the exception of only her immediate family, all of Demailly’s relatives live in France.

“My mom’s really passionate about what happened; she’s been talking about it a lot, and yesterday she went to San Francisco for a protest about it,” Demailly added.

Demailly said that the freedom of speech, from her perspective, protected the actions of the Charlie Hebdo staff.

However, she qualified her statement, saying, “just because you have the freedom to do something doesn’t mean it’s right.”

While Demailly does not support the newspaper’s actions, she said “those people didn’t have to die.”

Apart from the immediate controversy that the French situation has caused across the world, people are concerned about the implications for the future.

Waller continued to say that it is not quite time to alarm ourselves, however.

“There’s potentially violent Christians, too; I have Muslim kids in my class who follow the rules without feeling the need to commit terrorism,” said Waller.