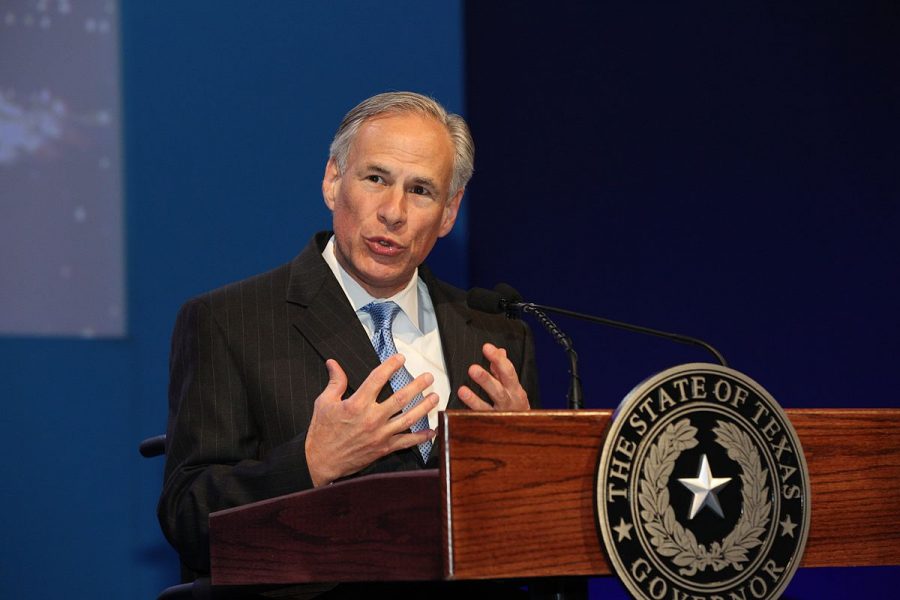 Gov. Greg Abbott made the controversial decision on March 2 to remove the Texas mask mandate and allow all businesses to reopen at 100% capacity via an executive order that took effect on March 10.

In a controversial decision, the governor of Texas ordered the abolishment of the statewide mask mandate and allowed all businesses to be open at full capacity.

Texas Gov. Greg Abbott’s revocation of the statewide mask mandate went into effect on March 10 through executive order GA-34. The executive order abolished Texas’ statewide mask-mandate, established in the summer of 2020, and allowed all businesses to open at 100% capacity. Businesses can personally request that masks remain mandatory for customers.

Many large franchises such as Target, Kroger, Macy’s, CVS, and JCPenny all still require masks before a customer enters their stores. The executive order also allows areas with high hospitalizations, defined as Trauma Service Areas where total COVID-19 hospitalizations take up 15% or more of total hospital capacity, to establish restrictions limiting business capacity to as little as 50%.

With the recent rollout of the Pfizer, Moderna, and Johnson & Johnson vaccines, many states and their citizens are loosening their safety precautions. For example, most schools have at least made plans to return to in-person learning in hopes of returning to normalcy. Abbott decided to reopen Texas based on the current trends of case numbers in Texas and the recent rollout of vaccines throughout the state.

“With the medical advancements of vaccines and antibody therapeutic drugs, Texas now has the tools to protect Texans from the virus,” Abbott said. “We must now do more to restore livelihoods and normalcy for Texans by opening Texas 100%.”

Paula Sanders, a Rice University professor, suspects that Abbott’s intentions are not what he publicly claims.

“I have been disappointed and distressed with the decisions of the Texas government for many years but in particular about the pandemic because the governor is not paying attention to the science. He, I believe, is acting in a manner that is simply meant to appeal to a particular political base,” Sanders said.

Rebecca Brewster, the mayor of Van Horn, a town in western Texas, supports Abbott’s decision. She argues against Sanders’ conviction that the move by Abbott was purely political.

“I think it’s for the greater good of Texans, and I think that’s where he was coming from,” Brewster said in regards to Abbott’s executive order.

Brewster agrees with Abbott that the state is moving in the right direction, especially when it comes to vaccinations. Brewster is also the chief financial officer of her local hospital district and believes, like Abbott, that their hospital system is in the position to reopen.

“I was very comfortable with the steps [the hospital administration] was taking to keep things under control while we figured out what was going on. We’ve got a very robust vaccination program going on here,” Brewster said. “As a matter of fact, we are having another vaccine clinic on Thursday […] so a good portion of our population is vaccinated. We’ve been very fortunate that the hospital has taken an active role in ensuring that our community gets the vaccines.”

As for why masking is necessary, COVID-19 is a respiratory disease, which means it spreads through body fluids like saliva and secretion droplets. Studies, such as those mentioned in this National Library of Medicine, show that these droplets can extend farther than six feet from those who expel them.

“The reason that masks work is that it covers your mouth and your nose, so when you talk or when you laugh or when you sneeze, the majority of the respiratory droplets stay behind the mask. It shields those respiratory droplets from coming away from you and exposing other people to [COVID-19],” said Phuong Nguyen, the chief medical officer at Santa Clara Valley Medical Center.

Nguyen isn’t just concerned about the lift of the mask mandate, however. The other provisions of the executive order also make her wary.

“Besides the masking, which is one major factor, you also need to have the distance because respiratory droplets, when you or I laugh or cough, those droplets have been shown to spread as far as six feet from where you were standing… In order for you to continue with that six feet personal space that needs to happen, you’re going to have to reduce the capacity of businesses because before COVID, you don’t have [the six feet] requirement,”  Nguyen said.

This indecision among Texas voters carries over to the rest of the state as well. According to a poll done by Progress Texas of 997 voters, 48% opposed and 48% supported the decision.

As for whether the lifting of the mask mandate will affect anyone, Brewster doesn’t believe so.

Since Gov. Abbott lifted the mask mandate, there has not been a significant increase in daily cases of COVID-19 in the state. Texas has joined 15 other states in not having any mask mandate, and it is the largest state to do so. As for California, Newsom has informally asked the state to “double down” on masking in a recent press conference and denounced the states which repealed their mandates.

Nguyen echoed this statement, explaining that none of the states have reached herd immunity.

“Texas is only at [about] 10% vaccinated. So it’s way, way, way, way below what we would expect for you to be able to say that yes, a community has herd immunity, and it’s safe for people to take the mask off… The same is true for California. I think California, as a state, we have vaccinated 10 point something percent of people,” Nguyen said. “Right now, none of the 50 states have reached the herd immunity level that we are looking for, that we can say, ‘Okay. Let’s just take the mask off, and let’s not have to worry about social distancing and hand hygiene and things like that.’”

Despite disagreeing with Abbott’s decision to end the mask mandate and open up all Texas businesses, Sanders, along with many Americans, understands the desire to return to a sense of normalcy. However, she argues that the decision will delay the problem and make it harder to return back to life before COVID-19.

“I understand the eagerness of people to be able to open in some ways because of the tremendous economic repercussions of being shut down, but those repercussions could have been mitigated by a mask mandate and by the widespread wearing of masks and social distancing for this past year,” Sanders said.