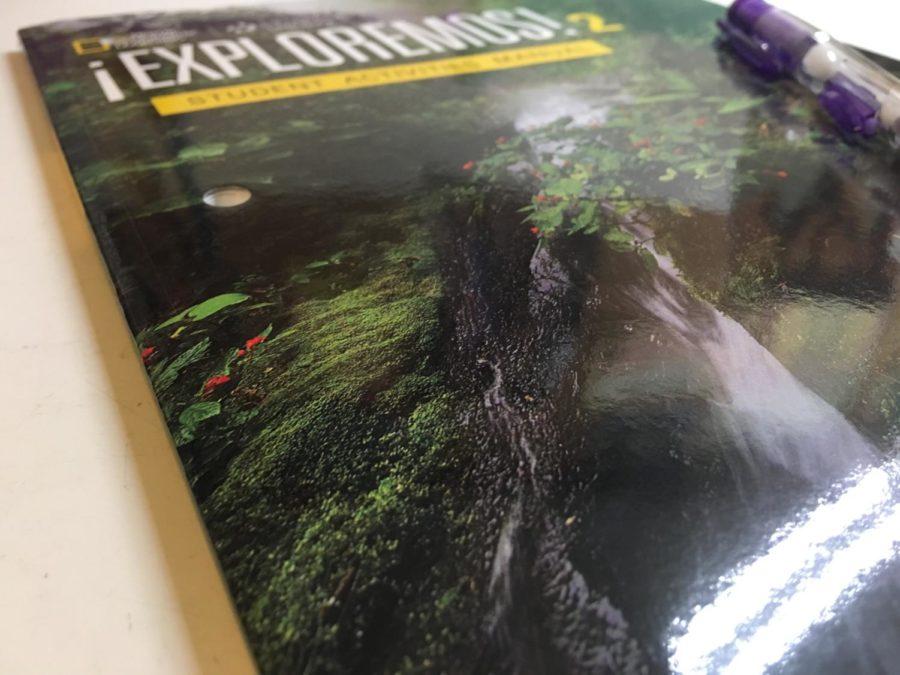 ¡Exploremos! is one of the many companies the language department at Carlmont is considering for the new textbooks.

Times are changing and with it the textbooks of the Carlmont world language department. After more than 10 years of using the same material, it’s time for a change.

According to Madeleine Fox, a Spanish II teacher at Carlmont, as well as Roberta Scott who teaches French I, Spanish III, and Spanish III Honors, the textbooks in place contain outdated vocabulary as well as a lot of mistakes throughout the book.

The language teachers of Carlmont, as well as the other schools in the Sequoia Union High School District, got together to decide on a new textbook.

“We have never in book adoption involved students. We feel strongly that we are professional teachers and can go over the candidates and pick the best book. We may ask a few students to look at them with us but never involve them. That put the students through a tremendous amount of what I believe was unnecessary stress,” Scott said.

Once the textbooks were chosen, all language teachers were required to spend a month with each textbook. Each language level had to agree on what chapters to teach so that it would correspond with what the students would have learned in the old text.

However, for French I students in particular, the switch was a bit more complex than intended.

“My experience in French was much more challenging, mainly because of the book D’Accord. One of our colleagues at Notre Dame de Namur University has been using that book for four years now. She said, ‘Please, Mme. Scott, don’t bring that in for piloting. This book was written for French I college level.'” Scott said.

Nonetheless, the textbook was brought in to pilot. Since the teachers aren’t allowed to modify the tests, the students were required to take the college level exams at the end of the chapter.

Consequently, after French I students took the first grammar exam, their grades reflected the difficulty of the text. According to Scott, there were only three people that got A grades while 21 received F grades. And while the highest score was a 42 out of 43, the lowest score was a zero.

Scott’s concern was mirrored in the students’ experience.

Jessica Ma, a freshman taking French I, said, “It’s been really hard changing textbooks because there were new concepts we hadn’t covered that the book expected you to know. Everyone was struggling for a while and really hated the first textbook we piloted which was called D’Accord.”

However, not all was bad throughout the piloting experience, as the second textbook Scott’s class tried, T’es branché?, had a much better outcome.

Fox’s experience with the piloting program was quite different.

“I’ve had a mostly positive experience with the textbook pilot […] We wanted to try and make it as easy of a transition for students as possible. That’s the idea, the book is different, but you wouldn’t really notice we are using a different book […] as it would coincide more or less what we were teaching anyway in ¡Exprésate!,” Fox said.

To an extent, the department succeeded in their intentions. For Camran Hitchcock, a freshman taking Spanish, the transition was not ideal, but manageable.

“It does at times throw me off track because the tests are based on different textbooks causing the format to change. Not to mention we are told we will revisit other textbooks,” Hitchcock said. “Overall textbook switches can be confusing, but in the end, it is vital to finding the textbook that works best with our ability to learn.”