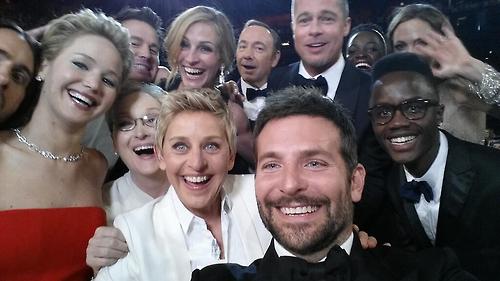 One of Hollywood’s biggest events got the audience and media talking about the best dressed Red Carpet looks, the year’s Academy Award Winners, as well as Ellen DeGeneres’s famous tweet.

The Oscars once again did not fail to entertain. This year’s host, Ellen DeGeneres, was absolutely hilarious as usual. From cracking jokes about Jennifer Lawrence tripping the second year in a row, to bringing in pizza for the audience, DeGeneres was able to keep the night alive with her non-stop humor.

There were also musical performances by Pharrell Williams, Pink, Karen O, U2, Idina Menzel and Bette Midler. Williams performed his popular song Happy to start off the Oscars, which got the audience dancing and enjoying the night. Bette Midler performed the iconic song “Wind Beneath My Wings” and Pink stunned the audience with her vocals singing “Somewhere Over the Rainbow.” These were definitely the top three performances of the night.

Aside from the entertainment, fans and audiences were also talking about the extraordinary film 12 Years a Slave which was awarded Best Picture. This Academy Award winner was definitely the right one. Gravity starring Sandra Bullock won six Academy Awards including Best Cinematography. However, the amount of awards that Gravity received was a bit surprising due to the fact that the movie was not all that amazing.

Lupita Nyong’o in 12 Years a Slave was also awarded for Best Actress in a Supporting Role, which had the audience cheering with joy. Nyong’o did an amazing job in the film and her acting was on point which made the movie seem so real and emotional.

To add to the awards and DeGeneres’s hilarious jokes, Nyong’o absolutely stole the attention on the Red Carpet with her beautiful, light blue Prada gown which got the media talking about her non-stop.  From hilarious comedy and entertainment, to Academy Award winners and best dressed actors, This year’s 86th Academy Awards was definitely one of the best.