The Bay Area reacts to rising fear over climate change 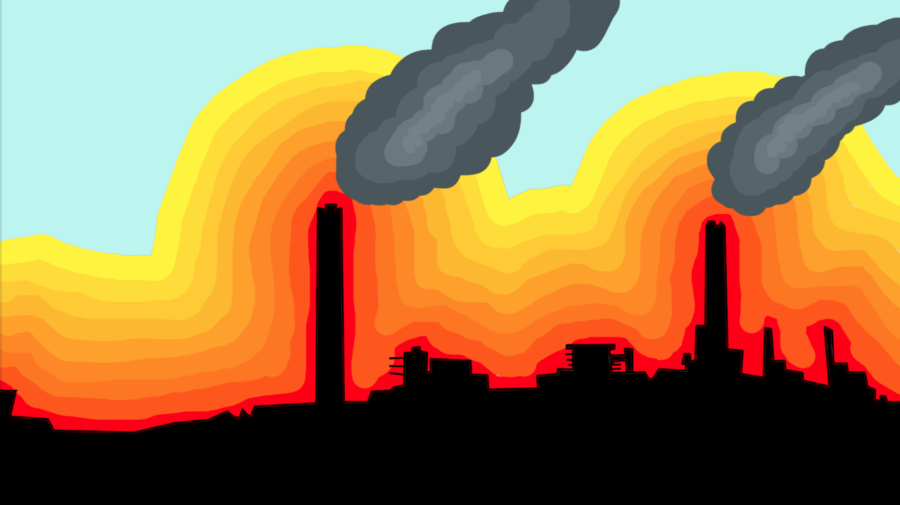 Human activity is suspected to be the main reason behind the rising climate.

Four hundred and eleven million people across the world would be exposed to drought.

The suitability for the transmission of deadly diseases on land would rise by 27%.

Coral reefs, ice in the Arctic, and half of the range used by insects and plants would completely disappear.

That’s what climatologists estimate would happen if the average temperature around the world increased by just 2 degrees.  After all, it is speculated that a 5-degree increase in temperature caused by a meteor striking Earth millions of years ago was able to kill the dinosaurs.

“Climate change is not only a rise in the surface temperature of the Earth, but it also brings about more extreme events, such as more wildfires and more extreme cases of hurricanes, as well as glaciers melting because of ecological damage,” said scientist Amol Phadke. “We are beginning to see some of these effects now, but more of it will be seen in the 2050-2100 timeframe, especially with the sea level rising, as there are a lot of countries very close to the sea.”

According to the World Health Organization (WHO), climate change is expected to contribute to an additional 250,000 deaths per year between 2030 to 2050.

Yet, a poll from Yale has revealed that 23% of Americans describe themselves as either disengaged, doubtful, or dismissive of climate change.

“Although it is better known among the well-educated, I think it needs to be more widely known. It is very clear that it is happening, and it is not very obvious to some that it can impact lives,” Phadke said. “This knowledge needs to be part of high school education so that younger people are confident and know all the facts and are able to take action.”

Between 2010 and 2015, India’s government had to pay $30 billion in the aftermath of natural disasters that scientists say were worsened by the effects of climate change. According to the Scientific American, the densely-populated country (which hosts 1.2 billion people), would be hit the hardest by a rising climate — and India is only responsible for half of the carbon dioxide emissions in metric tons than the U.S.; in fact, the world’s richest 10% produce half of all greenhouse gas emissions.

Last October, the U.N. reported that climate change will be irreversible in less than 12 years. Under this 2 degree margin, crop yields in the Midwest are expected to decrease by approximately 50-70%, which would bring about severe blow on the U.S. economy.

However, the current POTUS, Donald Trump, has outwardly denied evidence supporting the existence of climate change. In the two years since he has become president, he has vastly transformed policies instituted during the Obama administration intended to avert climate disaster. The National Geographic stated that Trump’s decisions to greenlight pipelines and dismantle conservation plans has made the situation more dire.

“It’s very important to vote for candidates who believe in facts about climate change. Our representatives have a lot of power to change the course of climate change, by banning new coal and gas power plans to help solve the problem,” Phadke said. “Think about what impact our actions have on the environment; we only have one Earth to live on, and we are already polluting it so much.”

In regards to political representation, newcomer Alexandria Ocasio-Cortez has proposed a Green New Deal, which aims to limit greenhouse gas emissions and support clean energy industries. However, Republicans have expressed strong opposition of this bill, and, even if the resolution were approved, the legislation is non-binding.

Despite this setback, legislators in California are looking towards environmentalist policies of their own, including a plan to reduce greenhouse gas emissions by 40%. California hopes to achieve this goal by minimizing petroleum use and doubling renewable energy production within the near future.

Clean energy is rapidly decreasing in cost, and, with greater accessibility, is becoming much less of a challenge to use.

“If you can eliminate gas emissions by, say, using solar energy, wind energy, or hydro-energy, it could cut down on the burning of fossil fuels drastically,” said Junior Darby Bryan.

Governor Gavin Newson stressed the importance of believing the science behind climate change.

“If anyone is wondering if climate change is real, come to California,” Newson said in a press conference. “We are in a very precarious state. There is no debate.”

Then there are those like Greta Thunberg, who, in the past year, led a movement encouraging students across 71 countries to protest legislators’ inaction regarding global warming.

According to NPR, 2018 was the fourth hottest year on record (the top five all within the last five years), and 97% of scientists would agree this was an impact of global warming.

In a speech to the World Economic Forum, Thunberg implored her audience to be afraid of the impending consequences of climate change.

Ultimately, tens of thousands joined her, inspired by ongoing protests.

“I’m not sure about protesting it, because while it’s still bringing attention, you’re not actually doing anything,” Stanks said. “We should take actions to actually try and stop it, and come up with solutions — if you brought them a solution, I’m sure something could actually come of it.”

Sophomore Meagan Freeman approved of her intentions and hoped that it would spread the need for change.

“I feel that people have not been taking climate change as seriously until recently, and more people are now starting to realize that climate change is starting to become an issue,” Freeman said. “We need activists to spread awareness so more people can be involved in solving this growing issue. Hopefully, these protests can inspire others to start making a change.”

“Unless you are a teenager, you probably read in your high school textbooks that [the five mass extinctions in history] were the result of asteroids. In fact, all but the one involved climate change produced by greenhouse gas,” Wallace wrote. “The most notorious was 250 million years ago; it began when carbon dioxide warmed the planet by five degrees Celsius, accelerated when that warming triggered the release of methane, another greenhouse gas, and ended with all but a sliver of life on Earth dead.”

In a article he later wrote for the Intelligencer, Wallace-Wells expressed cautious optimism for the climate. He cited the fact that a 2-degree increase is much better than four, where damages from global warming would amount to $600 trillion.

Stanks, an aspiring marine biologist who has done extensive research into climate change, traced it back to human activity.

“I got into an argument with my friend earlier because they said that older generations are not to blame with everything wrong with the environment and climate change,” Stanks said. “My friend said that since they were unaware of the effects of their actions, they can’t be blamed. But it’s still their fault, and we need to try and fix that.”

Bryan demonstrated a much different view from her peers on the subject.

In their discussion on the matter, Stanks clarified one of the most common misconceptions about climate change: if global warming was real, why is there still winter?

“Global warming just makes everything more drastic, including harsher winters and harsher summers. Just cause the Earth is warming it’s not only going to cause a rise in temperature but it will also make some places colder,” Stanks said. “Another thing is that some people think that we have a long period of time before it can be reversed, but that’s not true. We need to take action now, or it’s all downhill from here.”

With the track the climate is currently on, it is estimated that $77 billion worth of land in San Francisco will be buried underwater by 2050.

“Scientists have been studying the effects of climate change for years and have even been comparing data from hundreds of years ago to compile enough evidence to show the upward trend of rising temperatures on the planet,” Freeman said. “Clearly the temperature has not remained the same, especially when we start to find the evidence in nature: the sea level rising, glaciers melting, sea creatures dying from warmer waters. The evidence is there, and scientists can clearly conclude that climate change is occurring.”

Students at Carlmont described how they themselves work to protect the environment.

“I am trying to improve the environment by making small changes in my life such as using reusable products, learning the proper materials to recycle, and becoming more educated on the topic,” Freeman said. “I think that the more information I am able to learn, the more motivated I will be to make changes in my life and teach others the threat that climate change is having on our world.”

Another suggestion was to reduce meat production by eating vegetarian as 9% of greenhouse gas emissions result from agriculture.

“Much is advertised about turning off lights, carpooling, biking to reduce your ‘carbon footprint,’ but the UN and other organizations have identified that switching to a vegetarian diet just one day out of the week will have more of a positive impact than all those other efforts combined, ” Shayesteh said. “Industrial farming the way it is done today is really detrimental to the planet (the waste the animals produce, the space they take up, the gas they emit, and the water and food they need to consume) and this will need to be addressed if we all want to continue to enjoy eating meat.”

Stanks has made other changes to her lifestyle.

“I don’t use a lot of plastic anymore. I have gone to beach cleanups, and, as I want to be a marine biologist, I want to be able to try and actually help some of the garbage patch in the Pacific,” Stanks said.

The Great Pacific Garbage Patch is the largest collection of plastic in the ocean, covering approximately 1.6 million square kilometers. But how did it come to be?

As Shayesteh put, “many people aren’t entirely aware of the fact that plastic never ever ‘goes away,’ or degrades — it just breaks down into smaller and smaller pieces of plastic until they turn into microplastics. These microplastics get ingested by a lot of sea life, especially filter-feeders, and then the plastic just moves up the food chain, and we’re at the top.”

She advocated against the use of plastic if possible.

“Even if you are recycling your plastic water bottles, only less than 9% of it actually gets recycled,” she said. “So it’s great that we collect and separate recyclables, but because much of it isn’t actually being recycled, efforts would be more impactful if people would just use reusable ones and cut out the one-time use plastics altogether.”

Phadke argued that educating one’s peers on their carbon footprint is enough to make a difference.

“Spread the message,” Phadke said. “You have to convince other people who don’t believe in climate change by showing them the facts. Talk to two or three friends who don’t know the facts, and share with them the science so that they know and can form their own opinions on the issue.”