Menlo-Atherton takes home a win from the Scots 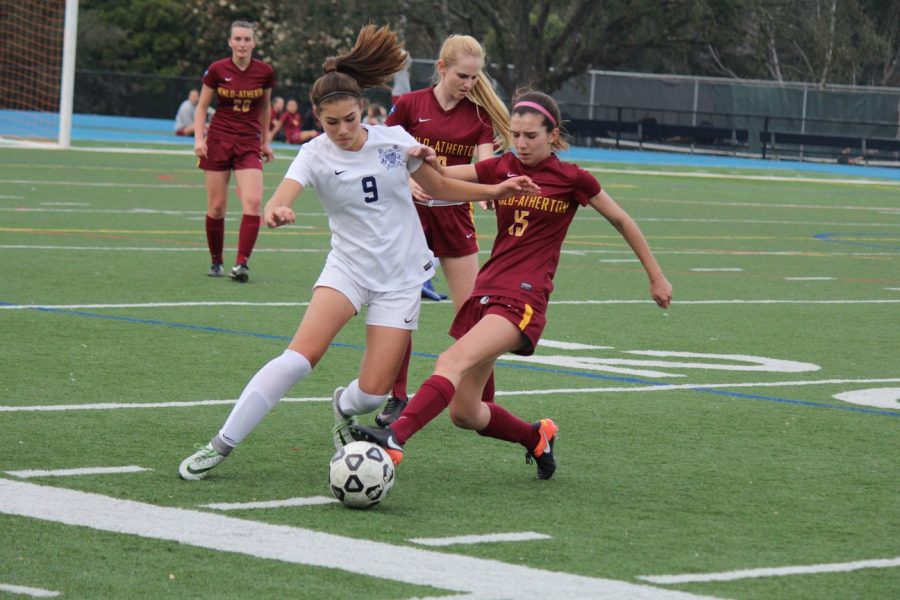 Freshman Kyla Orthbandt gets by the defensive line in attempts to score.

Cleats tear up the turf field as the Lady Scots attempted to best the Bears under the Carlmont lights.

On Jan 31 the Scots took on Menlo-Atherton in hopes to make up their previous defeat to the Bears. Though both teams played hard, the Bear skills and speed allowed them to take another win on Carlmont’s home turf.

During the first half, the Bears scored a total of three goals against the goalie, Sarah Stulbarg. Stulberg dove for many of M-A’s shots, but was not able to get completely behind them.

The offense had multiple chances yet many of the shots were prevented by the Bear’s quick goalie and deflected off the goal posts.

Senior Paris Bartolo said, “We all played a good game and fought hard. Our goalie saved us many times, and I was impressed with our play tonight. I do think we improved the second half a lot. The Bears had skill, and we needed to not stab at the ball and instead look up and take our time.”

Though the Scots struggled to score in the first half, sophomore Chiara Rigatuso and freshman Kyla Orthbandt were able to pressure the Bears defense during the second half and score.

Orthbandt was also given a penalty kick in the box, scoring a goal for the Scots.

Freshman Samantha Phan also helped create a series of chances for the Scots as she was able to get past the goalie but unable to finish the goal.

Coach Lindsey Monaghan said, “Honestly I think it was one of our better games of the season. It’s the best to see the girls come together as a team and score. It was a shutout last game against M-A, so it’s awesome that we got shots on the goal.”

Although the Scots came back during the second half of a total of four goals, the Bears took revenge after the goals and won the game with the score of 6-4.

The Lady Scots will continue to practice for their next game against Hillsdale Highschool on Feb 2.

“I am super proud of the girls and tonight was a win for me,” said Monaghan.