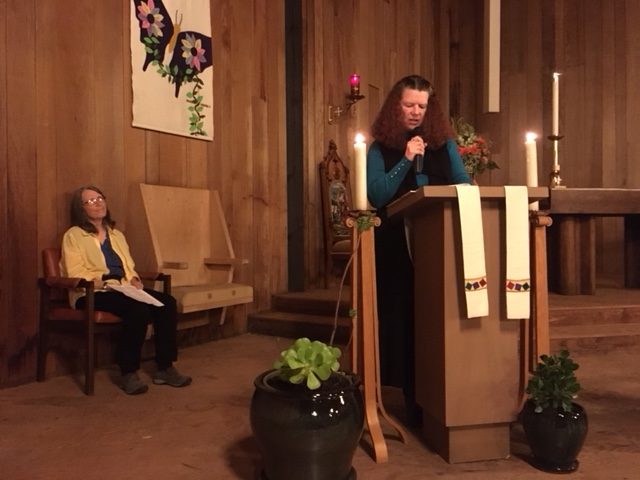 Kristi Denham reads an excerpt of Martin Luther King's "I've been to The Mountaintop" speech on the podium of Good Shepherd Episcopal Church on Jan. 15, 2018.

“I have a dream that my four little children will one day live in a nation where they will not be judged by the color of their skin, but by the content of their character.”

Many lesser-known Dr. King speeches and excerpts were also read aloud at the Good Shepherd Episcopal Church on Jan. 15, 2018. The public gathered to celebrate his life and legacy and to remember his impact on the world.

Jan. 15, 2018 would have also been King’s 89th birthday. King was a civil rights leader and activist, who is well known for peacefully combating against racial segregation, civil rights, and opposition of poverty, and his birthday is a national holiday.

This is the second year the church has held a Martin Luther King event. At the 2017 event, attendees listened to recordings of King’s speeches. This year the community recited them instead.

“There are a few reasons we had people recite his speeches, rather than just listening to the old recordings. The first being it was hard to understand the old recordings due to the technology not being as updated as today. The second reason is we wanted to hear our neighbors speaking rather than just listening,” said Father Michael Arase-Barham, the pastor of Good Shepherd Church.

At the event, there were 28 speakers of all ages and backgrounds, including featured public figures like the mayor of Belmont, Doug Kim.

“His legacy touched my life. I want to be a part of this and for my kids to see history,” Kim said.

However, the event included even those who were not speaking and still recognized the significance of MLK day.

“It’s important we all do something to celebrate Dr. King, it should be more than just another day,” said Kelda Jamison, an audience member at the event.

Many people made a point in explaining how Dr. King personally affected their lives.

“If the civil rights movement had never happened, I probably wouldn’t be here due to segregation,” said Dave Prasad, talking about his experience growing up in India.

The common themes among messages in the speeches quoted, letters read aloud, and stories shared all showed support for equality and justice.

“Due to recent events in our society today, I have become aware of my white privilege, and how it affects me every day,” said Stephen Cole, a speaker at the event.

After the last speaker, Arase-Barham added a reflection on the movement’s progress since Dr. King’s time.

At the end of the event, holding hands and singing “We shall overcome” brought everyone closer together both literally and figuratively.

“We can’t just tolerate our differences; we should celebrate them. I feel a moral obligation to be involved in events like [Martin Luther King Day]. To try to say ‘no more,'” said Belmont city council member Warren Lieberman.