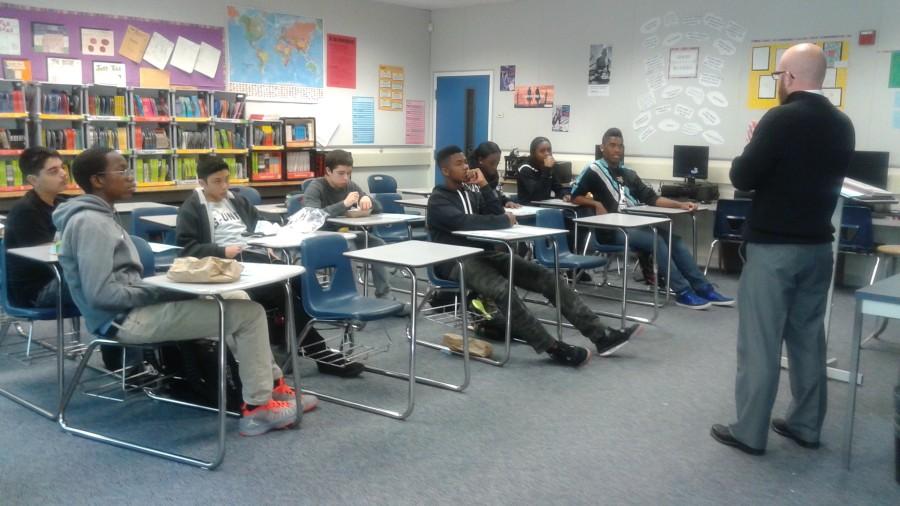 At the club meeting, a speaker comes to present to BSU.

The Black Student Union, otherwise known as the BSU, is a club that embraces African American culture and history, and discusses relevant news that affects people of all races.

“For me, the club is important because there’s not a large percentage of African American students at Carlmont, so it’s good to have a club where we can learn things about our culture and history,” said BSU President, junior Theodore Chatman.

The BSU brings attention issues of stereotyping, race, and inequality.

BSU Vice President, junior Rea Tucker said, “The BSU shows how we won’t be a stereotypical ratchet or ghetto kid, but actually go somewhere in life. I think it’s important, not just for us, but equality in general.”

The BSU takes the initiative to educate others about black culture.

Senior Aliyah Coogler said, “I feel that there are a lot of facts that are misconstrued in the history we learn, so I feel like it’s important to give out the right facts and to show, that as black people, we don’t always fit stereotypes, such as liking Jordans and having big eyelashes; we have brains as well, and we are intelligent and we can give that to you. We are more than a ‘twerk club.’”

This year, BSU made a memorable performance at Heritage Fair. They performed not only a dance, but a meaningful message about recent controversial events, like in Ferguson and New York City, in which black men were killed by white police officers.

“[At Heritage Fair we sang] the first stanza from the song Glory, from the movie Selma. We talked about Ferguson and other things. We didn’t want to do the typical twerking-dance, we wanted to put something out there, things that are going on in the world,” said Tucker.

The BSU went into depth about the incidents that occurred in a very moving and powerful way that got the audience’s attention.

“We were talking about Eric Garner, Michael Brown, and the Zimmerman case, so at the end of our performance, we said ‘Glory’ and we put our hands up, which is  what [Trayvon Martin] did [before he was shot],” said Coogler.

The BSU is a club that is meaningful in more ways than one; they have incorporated important issues that need to be discussed, for the sake of racial equality.

The club has plans to become more involved in and outside of school.

“Most of the things we do in the club are BSU conferences. We are going to Stanford to see presentations and meet other BSU clubs from the Bay Area,” said Tucker.

BSU is open to anyone who wants to join and help spread the notions they want to voice.

“The club isn’t just made up of black kids, it’s not just for us. It’s for everyone who is interested in black culture, or wants to be active about things going on in the world. Don’t be intimidated to join our club just because people think it’s black kids only,” said Tucker.

The BSU allows students to take part in learning to act in significant and beneficial ways that aren’t always addressed in society, as well as ones that are.