The Bridgepointe ice rink is set to reopen 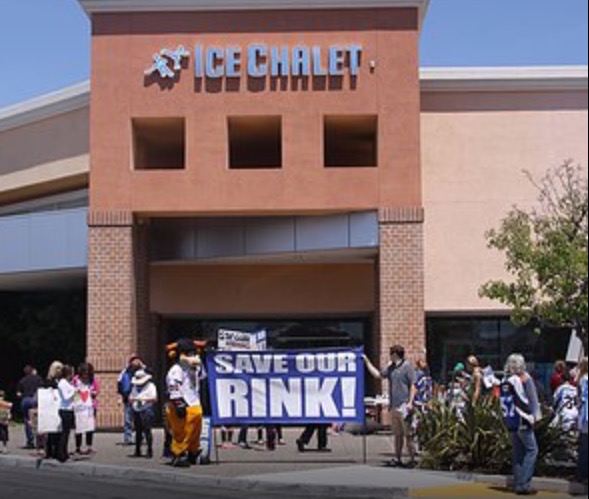 Protesters rally outside of the closed Ice Chalet, an ice skating rink in Bridgepointe Shopping Center.

After a long four-year battle, the ice rink in the Bridgepointe Shopping Center in San Mateo will reopen.

The decision to reopen the ice rink comes from SPI Holdings, a real estate and development company.

In early 2013, SPI chose not to renew the lease with the ice rink operator. According to Save the San Mateo Ice Rink leader Dina Artzt, the ice rink was a profitable business, and the decision to close it was based on SPI’s desire to open more retail stores in place of the rink.

SPI initially offered the San Mateo Planning Commission $8 million to make retail stores after the closure of the ice rink but the commission declined their offer several times. After push-back from the community with rallies and letters written to the city, SPI had a change of heart.

Several members of the San Mateo community were affected by the closure of the ice rink, but are excited that it will return.

Sophomore Maya Schwartz, a figure skater, said, “A skaters’ rink is their second home, and it’s heartbreaking when it is suddenly taken away from you. I think it’s amazing that the rink will be returning.”

Artzt said, “After four years of fighting a developer who refused to the open the rink, we are absolutely elated. Because of our grassroots effort, this rink is going to reopen.”

Now that SPI has made way for the ice rink to reopen, Goethal and the City of San Mateo are facing their next challenge: finding a rink operator.

“I’ve been calling all the potential operators, and I’m going to bring them to the ice rink on March 25 and April 1 to show them the condition of the rink, and hopefully they will make offers.”

Goethal and Arzt hope to have the rink reopened by the end of 2017 and are excited about the future of the rink.

Artzt said, “‘When it reopens, there’s going to be a huge attendance, and that rink will be busy all the time.”