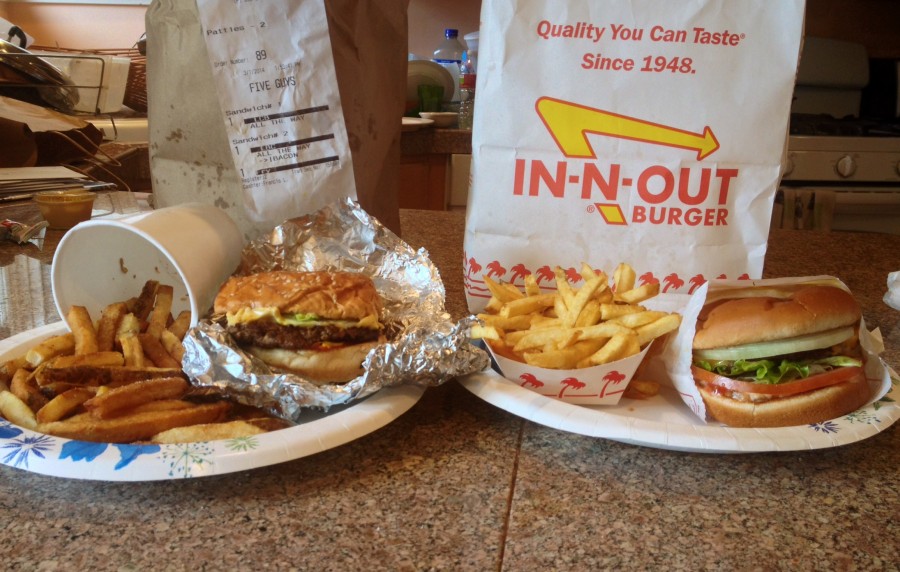 Five Guys and In-N-Out burgers and fries side by side.

When opting for a fast food burger, most students resolute to either Five Guys or In-N-Out. With Five Guys conveniently located just down Ralston and fairly close to Carlmont’s campus, and In-N-Out just a bit further south in San Carlos, the pressure is on the two burger joints to reel in indecisive customers.

I decided to go out to both local chains back to back, and judge which of the two reigns supreme.

First, I drove to In-N-Out and decided to order inside, as the line for the drive-thru was wrapped around the parking lot, as usually is at lunch time.

In-N-Out gives off a plastic feeling comparable to McDonalds, with plastic booths looking too small to seat their customers capable of eating their double-double burgers. In-N-Out also has a 50’s diner feel with neon lights and cute hats worn by their employees.

While there was no initial line to order, the wait time for my meal was fifteen minutes, as compared to the seven minute wait time at Five Guys.

Five Guys, without a drive-thru, provides customers with free self serve peanuts, and a generally quieter environment than its competitor.

For the overall ambiance and customer service the winner is Five Guys, with quicker service and free snacks.

As far as the actual burgers, In-N-Out does the little things right. I ordered a standard cheeseburger ($2.35). On my burger, they toasted the buns making them buttery yet crisp, had fresh lettuce, and the cheese was melted nicely. My cheeseburger also featured their infamous “spread,” a thousand-island based sauce they put on almost everything — including the fries by request.

In contrast, at Five Guys the ground meat for my “little cheeseburger” ($4.69) looked like it was shaped by hand on the premises, and nearly fell apart in my mouth, a characteristic of a high fat high tasting patty. Five Guys also offers an array of free topping including A1 sauce, green grilled peppers, and hot sauce.

I was not a fan of the buns at Five Guys, however, as they proved to get soggy after being wrapped up in foil. My personal preference, regardless of the soggy buns, is the Five Guys burger.

For fries, Five Guys is the clear winner. In-N-Out serves healthier fries made with vegetable oil, as opposed to the peanut oil used at Five Guys. In-N-Out’s fries taste like thin strips of salted cardboard, while Five Guys fries are more flavorful, thicker cut, and include the skin from the potatoes.

Overall, though the prices at Five Guys are nearly double those of In-N-Out, Five Guys is the better chain. If you’re looking for a cheaper bite on the go, however, the drive-thru at In-N-Out may be the better choice.

For my purposes, Five Guys wins.