The changing tide of mascots 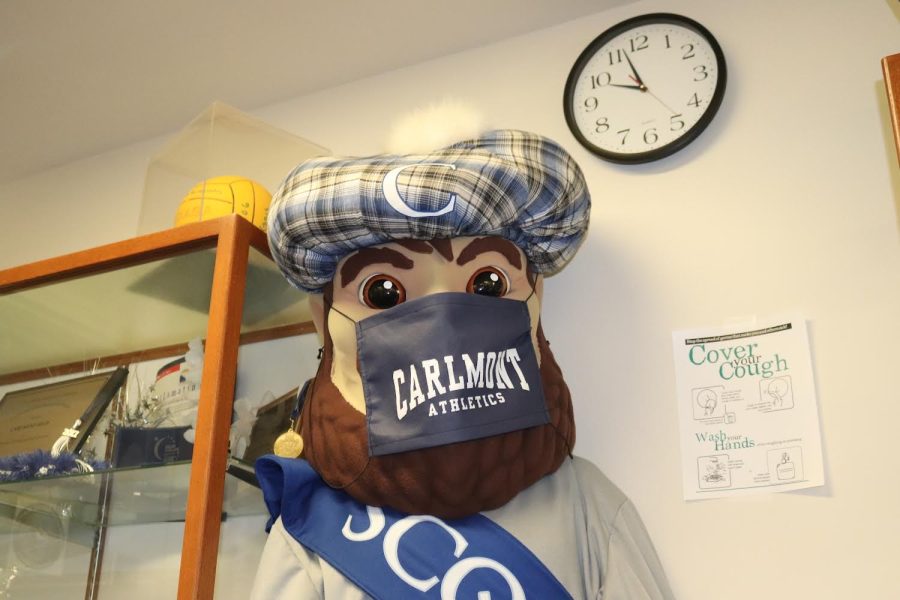 Monty, the longtime mascot of Carlmont High School, sits in the administration office.

The Washington Redskins. The Cleveland Indians. The Sequoia Cherokees. The Atlanta Braves tomahawk chop. The past few years have been marked with change as sports teams across the nation feel the pressure from the community to change their names, mascots, and brands away from potentially offensive terms.

Non-tolerance for racism has been prevalent in the 21st century, and professional and amateur sports teams all around the country have found themselves in a position where they may be using a potentially offensive name or mascot. These practices and names are facing increasing controversy, as some push for more sensitive rebranding and others fight to keep so-called “traditions” alive.
ATLANTA BRAVES TOMAHAWK CHOP
In this upcoming Major League Baseball season, the reigning World Series champions, the Atlanta Braves, and their tomahawk chop will be taking the field again amid a cloud of controversy.

The tomahawk chop is a repeated “chopping action” with the palm open that usually goes with a rhythmic beat, such as this war chant from Florida State University. This move has been met with protest and offense, as some see the practice as a white-washed, stereotypical, and insensitive portrayal of indigenous communities.

With Atlanta’s repeated playoff appearances in the past few years, the questionable gameday tradition of the tomahawk chop has been put on a national stage, and public opinion seems to be divided on the issue.

According to a 1991 edition of The Atlanta Journal-Constitution, the tomahawk chop was first introduced to the Braves through a combination of a tune created by Braves organist at the time, Carolyn King, and the mainstream use of the actual hand gesture by Florida State.

“With Carolyn striking those A and G keys when the Braves are batting, and with Braves fans responding by chopping the air with their right hands, one of the most refreshing fads in the majors happens nearly a dozen times a game,” said Atlanta Journal-Constitution staff writer Terence Moore.

That very same year, the Braves made their way to the 1991 World Series, and controversy and protests followed.

According to a Washington Post article published a day after the incident, around 800 peaceful demonstrators gathered outside the Metrodome, the stadium for the opening game of the World Series, to protest the move for its offensive portrayal of Indigenous customs.

Clyde Bellecourt, the founder and a leader of the American Indian Movement, was quoted in the Washington Post article describing the chopping as “ignorant, stupid, racist behavior.”

“I’m sure they wouldn’t call [the team] the Atlanta Bishops and hand out crucifixes to everyone who comes into the stadium. How about the Atlanta Klansmen? They could hand out sheets to everyone who comes in. They would never call the team the Atlanta Negroes,” Bellecourt said. “This is the way we feel when we see the chants, the war paint, and the tomahawks. They [Braves officials and fans] are totally scholastically [ignorant] about Native American culture. Like everyone else, they have a John Wayne attitude about Indian culture, tradition, and history, and they’re ignorant to the racism that’s going on.

More recently, in the 2019 National League Division Series (NLDS), the distribution of foam tomahawks was stopped by the Braves after St. Louis Cardinals relief pitcher Ryan Helsley, a member of the Cherokee Nation, shared his thoughts on the chop.

“I think it’s a misrepresentation of the Cherokee people or Native Americans in general. It just depicts them in this kind of caveman-type people way who aren’t intellectual. They are a lot more than that. It’s not me being offended by the whole mascot thing. It’s not. It’s about the misconception of us, the Native Americans, and it devalues us and how we’re perceived in that way or used as mascots. The redskins and stuff like that,” said Helsey.

In response to Helsey’s words, the Braves organization released a statement promising to re-evaluate some of their practices.

“We appreciate and take seriously the concerns of Mr. Helsley and have worked to honor and respect the Native American community through the years. Our organization has sought to embrace all people and highlight the many cultures in Braves Country,” the statement read. “We will continue to evaluate how we activate elements of our brand, as well as the in-game experience, and look forward to a continued dialogue with those in the Native American community once the season comes to an end.”

Currently, there seem to be no moves indicating any more changes to the chop tradition after the Major League Baseball (MLB) commissioner Robert Manfred was interviewed about the issue before the 2021 World Series, a matchup between the Braves and the Houston Astros.

“The Native American community in that region is wholly supportive of the Braves program, including the chop. For me, that’s kind of the end of the story,” said Manfred per The Washington Post’s Chelsea Janes.

However, this issue is far from solved, as a statement was then released by the National Congress of American Indians (NCAI), denouncing Manfred’s claims of support.


CLEVELAND INDIANS
Another MLB team that has faced controversy is the Cleveland Guardians, who will be debuting their new name for the first time after leaving behind their old “Indians” name.

Public pressure had been building for replacing “Indians” for a while, but the first significant step was taken in 2018 when the Cleveland organization announced the retirement of the Chief Wahoo logo, a highly contentious depiction of a Native American chief.

The NCAI then released a statement showing their approval of the decision:

“NCAI has worked to educate Major League Baseball about this issue in recent years, sending several letters to the league highlighting the importance of removing this harmful mascot and logo, which resulted in a meeting with MLB Commissioner Rob Manfred last year. Damaging imagery like the caricature of Chief Wahoo denigrates Native people and is harmful to their self-esteem, particularly for Native youth. Commissioner Manfred recognizes this fact, and thus kept his word, fulfilling his commitment to work with the team to retire the Chief Wahoo logo. NCAI commends Major League Baseball and Commissioner Manfred for choosing to stand on the right side of history.”

Since then, the organization took time to consult fans, players, Clevelanders, and executives about a new name for the team going forward, ending up with the “Guardians,” a nod to the enormous Guardians of Traffic statues outside of Progressive Field, their home stadium.

“In searching for a new brand, we sought a name that strongly reflects the pride, resiliency, and loyalty of Clevelanders. Guardians embody those defining attributes while drawing upon the iconic Guardians of Traffic proudly standing just outside of Progressive Field on the Hope Memorial Bridge,” said Paul Dolan, the owner and chief executive officer of the Cleveland Guardians. “It brings to life the pride Clevelanders take in our city and the way we stand for each other while defending our Cleveland baseball family.”

The move was met with some mixed reactions, as some fans were angry at the abandonment of a name they felt carried a rich history, and others rejoiced at the change.

“I think that this was an important step for the MLB to let the world know that things are changing, and now we can all just focus on the game of baseball,” said Carlmont sophomore Benjamin Sunahara, a longtime baseball fan.

While some fans are unhappy with the change from the original “Indians” name, which had been in place since 1915, players have shown willingness to change with the times.

“Looks good to me! When it comes down to it, I’ll wear whatever as long as it’s representing this city,” said Guardians pitcher and 2020 American League (AL)  Cy Young Award winner Shane Bieber when asked about the team’s new hat logos in an online Q&A session on Nov. 24.

SEQUOIA CHEROKEES
This idea of changing mascots to be more progressive and inclusive isn’t limited to the pros. Sequoia High School, now known as the Ravens, is fresh off their own name change from the controversial “Cherokees.”

Their transitioning process was started in 2002 when students and teachers began to voice complaints about the mascot. The district heard these complaints, and the mascot was changed to a raven by the administration later that year.

Students around the district, both past and present, are grateful for the move.

“I’m glad that Sequoia changed their mascot though because of all the harmful and insulting stereotypes that mascots of native people, or in this case Cherokee people, portray,” said Sequoia sophomore Maddie Ledford.

“That change [from Cherokees to Ravens] was very progressive for the community, and just a good move overall in general for the school and the community,” said Cooke.

However, the likeness of the “Cherokee” was still attached to the Sequoia sports programs until April of 2019, when the Sequoia Union High School District board approved the complete transition to using Ravens as the school mascot and for their sports programs.

“Although we understand the nostalgic connection some in our community have with the now-former athletic teams’ name, we believe it is critical to not only listen to our students but give them the necessary support to lead as they are the current stewards of Sequoia High School,” said Sequoia Union High School District Board President at the time, Georgia Jack, in an interview with The San Mateo Daily Journal.
CARLMONT SCOTS?
Over in the Highlands, Carlmont High School has long used the “Scots” in sports programs and in the school mascot, Monty. Now, some students are beginning to push for a change.

“Our mascot was created because the European settlers of this area thought that the Belmont hills reminded them of the Scottish highlands,” said Carlmont activities director Jim Kelly.

When asked about the issue, former principal Ralph Crame and Kelly both shared that they have not heard any requests to look over or change the mascot as of November of 2021.

When asked about the issue, Kelly used his father, a Sequoia graduate, as an example.

“Is the name Cherokees inappropriate? According to my father, who graduated from Sequoia in 1936, the answer is most definitely no. He was proud to have his school represent the proud Cherokee Nation, just like Notre Dame or Sacred Heart proudly represents the nation and culture of Ireland. As such, I believe that a Scot as a mascot is appropriate,” said Kelly.

Despite this, some students, including Carlmont junior Winston Singh, believe that the mascot needs to go.

“As a student of Carlmont, I believe that we should adapt to change and that in order for Carlmont to keep up with the current age we need to get rid of the outdated mascot. This mascot was created in a time when it was okay for this type of imagery to be displayed, but now we need to get with the times,” Singh said.

Others, such as the Associated Student Body (ASB) President Jono Sison, offer a slightly different perspective.

“I personally think it’s okay to have our mascot be the Scots, but if someone of Scottish descent finds it offensive, their opinions should be respected rather than neglected,” Sison said.

However, no such complaints have been formally made to the Carlmont administration.

While the Indians and Cherokees will likely never see a competitive field again, with no plans of change by the administration, Monty and the Scots are likely to stay for now.