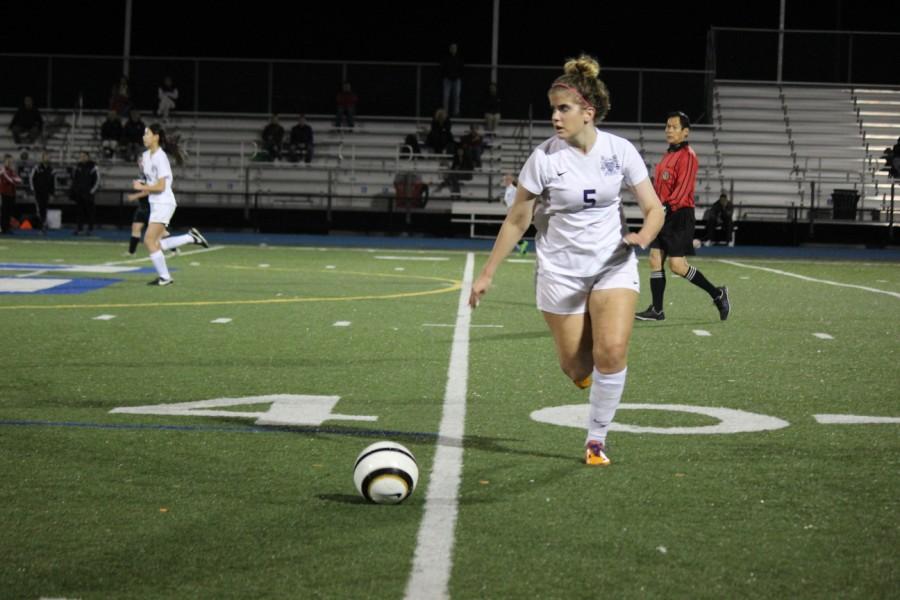 Junior Paris Bartolo dominated the center of the field, but the Scots couldn't manage to pull out of the game with a win.

Under the lights on Carlmont’s home turf on Jan. 28, the Scots struggled to connect in communication and maintain a strong work ethic. The game resulted in a 2-0 loss against Aragon High School.

Both teams played aggressively as the game began, yet the Scots were unable to find each other on the field and keep an organized formation. In the first half, Aragon sank a shot past Carlmont goalie and team captain sophomore Cate Armstrong into the corner of the goal.

Sophomore Gianna Westmoreland said, “Armstrong played well, even though that goal wasn’t saved. She tried her hardest tonight against Aragon.”

As the first half continued, freshman Samantha Tolu created a series of offensive chances for the Scots, but none of them were able to make it past Aragon’s goalie.

Junior Paris Bartolo said, “We needed to have more control with the ball in order to score. Our touches on the ball need to be tighter and we need to communicate more on the field.”

As the second half started, the Scots seemed to lose motivation when Aragon came back and scored a second goal against freshman Logan Bonetti, who had replaced Armstrong in goal.

The defensive line remained strong with sophomores Brooke Chang and Isabella Ravaglia as they marked Aragon’s players tightly. However, Aragon’s speed up the line and quick footwork with the ball proved too much for the Scots’ formation and motivation to beat that night.

Sophomore Katherine Snider said, “We need to talk more and keep the ball in our control. If we talk and pass the ball more organized we will be able to win.”

During the second half of the match, last year’s number-one goal-scorer on JV, sophomore Sophia Eaker, played for the first time since her ankle injury had put her on the bench earlier this season.

Bartolo said, “We’re so happy to have Sophia back. She will be a great addition to the team; we’ve missed her.”