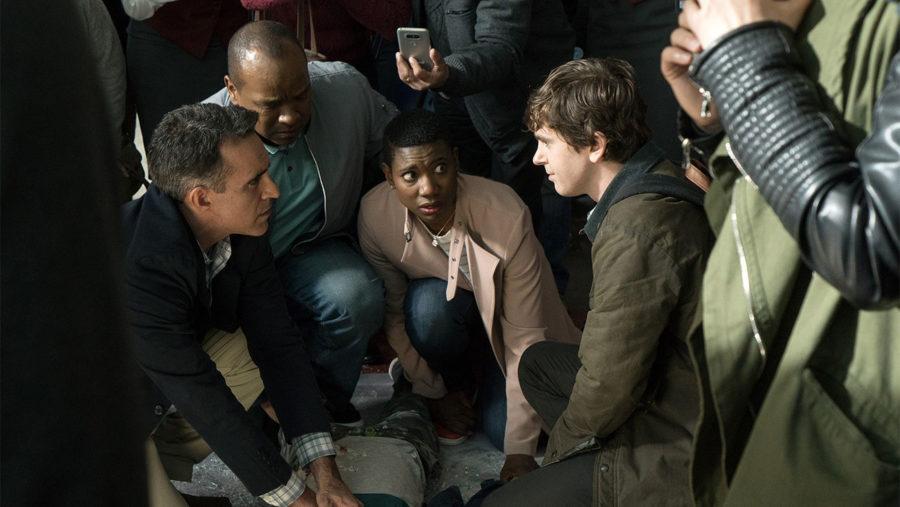 Dr. Murphy saves a child's life in the middle of an airport in the first episode of "The Good Doctor."

ABC’s new medical drama, “The Good Doctor,” aims to clear misconceptions about autism. Ever since the show was released in September, it has been doing just that.

“The Good Doctor” follows Dr. Shaun Murphy, played by Freddie Highmore (from A&E’s twist on the show Psycho, Bates Motel). Murphy has both autism and savant syndrome, causing him to struggle to join the surgical staff at San Jose St. Bonaventure Hospital.

However, the hospital president, Dr. Aaron Glassman, played by Richard Schiff, is motivated to keep him on staff and fights for him, ultimately getting him the job.

Although, this does not stop Dr. Murphy from being treated differently from the other staff. His boss, Neil Mendez, played by Nicholas Gonzalez, is especially against Murphy being a surgeon on his team and gives him a hard time in every episode.

This brings light onto how autistic people are treated differently in society and the workplace, even though autism does not affect intellectual ability.

The premise of “The Good Doctor” brings a positive outlook on autism as a whole, but sometimes doesn’t show this perspective as clear as it could have.

We see Murphy struggle to communicate with others, but also have the ability to express his extreme intellect at all too inappropriate times. Viewers without the knowledge of what autism is are left confused.

Along with this, the show also lacks character development, leaving little to no characters standing out in the episodes, even though all the actors are almost perfect fits for their characters.

This lack of development makes the show seem repetitive, as if it were following a cycle of two patients benefiting from Murphy’s knowledge, Mendez getting on Murphy’s case, and so on.

However, this does not take away from the appeal of the show. The show remains to keep viewers on the edge of their seats with the constant medical emergencies that occur in each episode.

The show is close to a typical medical drama as it includes emotional moments, life and death situations, and miraculous saves, but “The Good Doctor” stays away from a romantic plot line.

Overall, “The Good Doctor” is a refreshing medical drama. ABC has a true gem on their hands.