The Green Team implements the tri-bin waste system at Carlmont 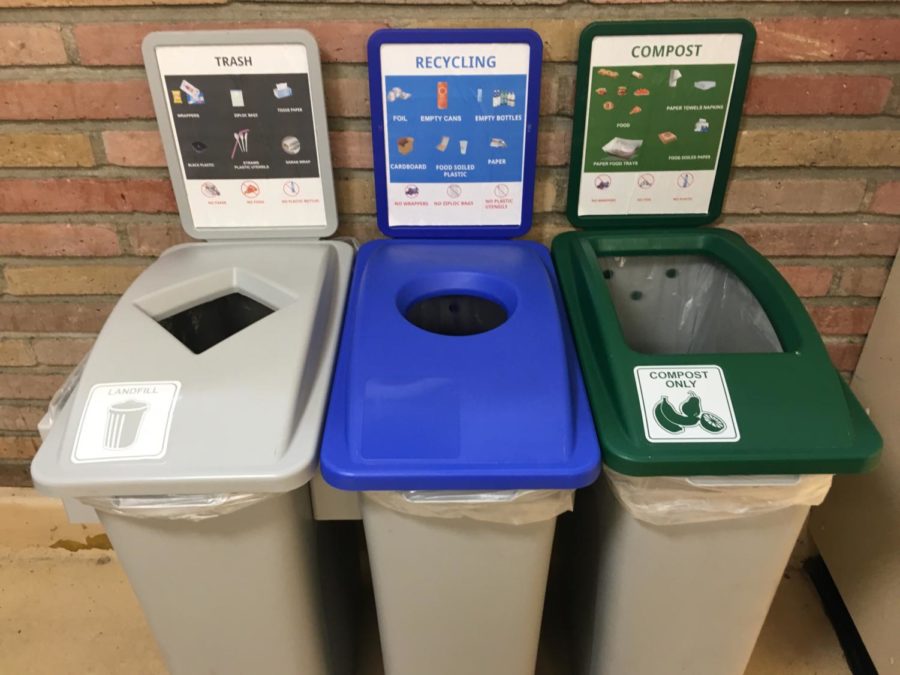 New tri-bin sets can be found throughout the hallways of Carlmont High School.

Implementing a tri-bin waste system at Carlmont has been the goal of The Green Team, Carlmont’s club for environmental awareness, since the 2016-2017 school year. Within recent weeks, that goal has been achieved with 45 new sets of tri-bins on campus and a plan to add more.

The members of the club originally proposed their plan to the school’s Governance Council with a Google slideshow demonstrating the benefits of the system and how they would carry out their plan.

The tri-bin system consists of compost, landfill, and recyclable waste bins. It pushes the idea of the proper disposal of waste and asks for the help of every student at Carlmont to prosper.

“When we conducted a waste audit, we found out that most of the trash Carlmont generates could be composted,” said Risako Nozaki, vice-president of The Green Team.  “Adding in compost saves money for the school, as well as decreases the amount of trash we generate overall.”

Some students may not know the proper way to dispose of their waste, so one of the features of the new system is a picture on the side of each bin with the type of waste items that belong in that bin.  This is meant to make sure that every student can do their part to make this system a success.

The club also created a video that shows students how to use the new system.  It identifies the difference between compostable waste, recyclable waste, and landfill.

Students have found the tri-bins to be beneficial and teach them the proper way to dispose of waste.

“The tri-bin system makes me more aware of what students throw away every day and is a much better alternative to the regular trash bins because sorting through the trash bins takes time and effort,” said Tomas Ronderos, a sophomore.

The Green Team has many plans for the future to keep educating students and making Carlmont more environmentally aware.  They have also provided waste education resources for staff so they can teach students the proper way to use the new system.

“We’ve implemented the system and will continue to modify and add more bins over time,” said The Green Team.

The tri-bin system has been a success so far due to The Green Team and the support they have gotten from administrators, staff, and even other students.  They have also gotten district support and depending on the success of Carlmont, other schools may implement the system as well.