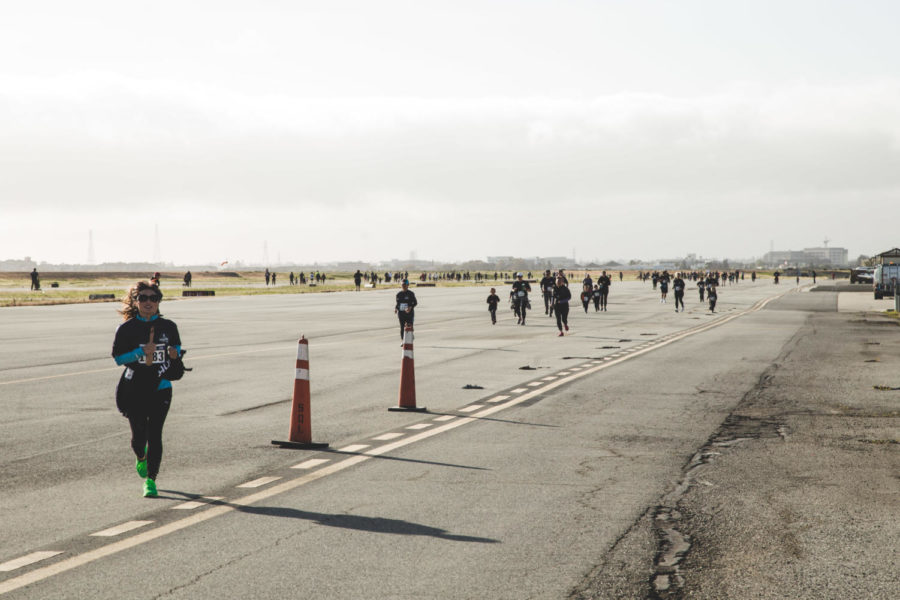 Hundreds of runners approach the finish line of the fun run.

Going on a Sunday morning run on an airport runway is not something many people have checked off their bucket list, but this weekend, the Hiller Aviation Museum opened up their doors to the Bay Area community to do just that.

As summer approaches, fun runs and 5k runs are beginning to pop up again, and as they do, the Hiller Aviation Museum manages to step up their game once again. For the third year in a row, hundreds of people showed up at San Carlos’s local airport for a chance to run on a runway.

Sunday’s run was a hive of activity. People who weren’t running still got to watch and enjoy the many activities available on the day. Roxie Erpeneeck and her father, Jason Erpeneeck, are veterans of the runway run.

“Running on the air course is super cool and lots of my friends are here, so it’s fun seeing everyone out here. You never get to run on the runway so it’s pretty neat,” Roxie Erpeneeck said.

Her father also enjoyed the experience.

“We are both runners. Roxie is on the cross country team at Ralston [Middle School] and we did this last year for fun, so we thought we’d come back to see if we could do better this year,” Jason Erpeneeck said.

As the host of the fun run, Willie Turner, the vice president of communications at Hiller, is the man to talk to.

In addition to the run and activities, a variety of nonprofits and health groups came out to sponsor the event and to promote their own missions. Kristina Chu from the Bay Area Air District had a booth at the event to share their message with fellow runners.

“This is our first year sponsoring this event. We thought it was a very good way to target folks who are active in the community while also letting folks know the importance of air quality as you’re running, as you’re being outside,” Chu said.

Ed Coady, one of the hundreds of runners who attended, not only got to run across an airstrip, but he got to walk away coming in first place and even took a humble win.

“Lots of my friends were running this race. It seems like it’s been really popular in years past. It was a perfect day for it — we couldn’t really ask for better conditions,” Coady said.

Sunday’s event appeared to be an enjoyable community gathering, and everything from the run to the family activities ran smoothly. For many, it opened up new experiences.

“It’s even more than just running on a runway… 40% have never even been in the museum before signing up to do this,” Turner said.