Beginning their journey from a decrepit rest stop on the outskirts of La Libertad, Guatemala, the group drove for hours until they reached the Guatemalan border with Mexico. From there, the difficulties grew, and José was left to contemplate his decision to leave his hometown.

José said, “Leaving my family brought an awful feeling to my stomach. I had second thoughts about my journey, and at some points, I didn’t know if I could continue.”

To complete this journey, José had to push these initial worries to the back of his mind.

Crossing the Guatemalan border with Mexico was a dangerous task. To ensure a safe passage and evade the watchful eyes of the Mexican military, José’s uncle devised a system that reduced the risks associated with crossing the river that divided the two countries.

The water rushed furiously downstream, violently splashing against the slippery rocks that dotted the shores on each side of the river. The riverbanks themselves were rocky in parts, sandy in others.

Yellow life jackets, tethered together by homemade string, bobbed in the middle of the menacing body of water. The deep blue of the river, tinged with light purple in the calmest areas, frightened the boys.

José and his cousin looked across the river at José’s uncle, who had already made the crossing. He stood, patiently waiting for the boys to gather up the courage needed to cross the river.

Without warning, José’s uncle launched the life jackets into the air. José stretched his arm out, mustering all of his will, to catch the line of lifejackets. Once he caught and secured the lifejackets to his side of the river, José and his cousin navigated the river with relative ease.

Soon after, the group of three emerged from the depths of the jungle. After searching for adequate transportation, the trio settled on traveling by car. Crammed in the backseat of a Toyota Yaris for many hours, the group welcomed a chance to stretch their legs. After the break, the group began walking, eventually arriving at a hotel. Their first brush with law enforcement was quickly approaching.

“[Immigration officials] were going to deport us from Mexico, and that worried everyone in our group,” José said.

With members of the Mexican military on the prowl, José’s uncle thought it imperative to remain hidden from prying eyes, secretive about the true purpose of their journey. The trio stayed in the hotel room for a few days, biding their time as the government officials moved on to more pressing matters. They resumed their journey northward, and within a week, the trio had reached the U.S.-Mexico border, unprepared for the horrors they would soon face. 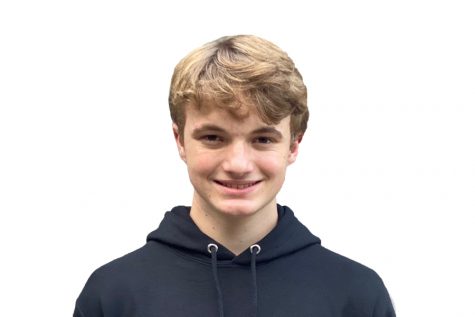 Hudson Fox, Staff Writer
Hudson Fox is a sophomore at Carlmont High School, and this is his first year in the journalism program. He is passionate about writing because it provides him with an opportunity to inform the public and discuss momentous happenings and pressing topics. Moreover, his belief in everyone's fundamental right to the truth drives his interest in journalism. In his free time, he acts as the president of the Language Exchange Club and participates in the Debate Club and Carlmont's soccer program.