‘The Last Dance’ for the first time: Week two 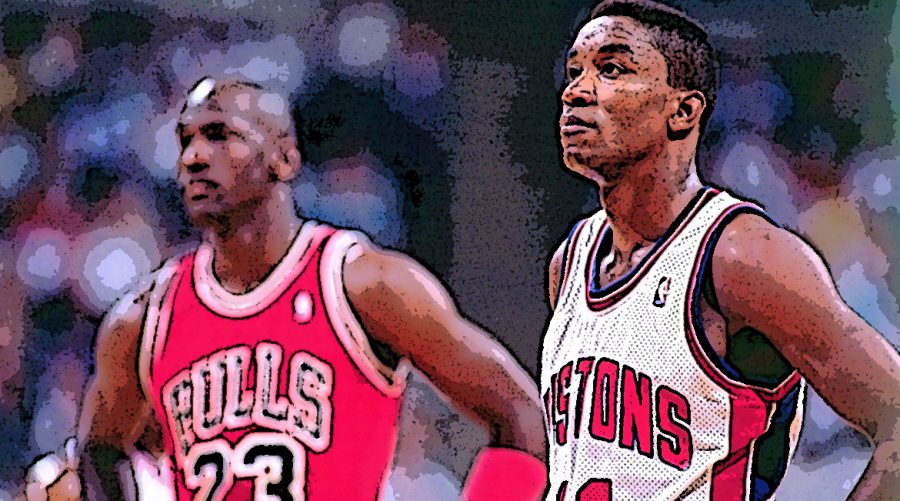 Before Michael Jordan (left) and the Chicago Bulls took over the NBA, Isiah Thomas (right) and the Detroit Pistons momentarily ruled the league.

The “Bad Boys:” a group so infamous that even I, who was born 23 years after their last championship, know to be the most raunchy, dirty-playing dynasty to ever walk onto an NBA court.

Led by Hall of Fame point guard Isiah Thomas, the group of Detroit Pistons nicknamed the “Bad Boys” dominated much of the Eastern Conference from the mid-’80s until the early ’90s. And, as seen in week two of ESPN’s 10-part docu-series “The Last Dance,” the “Bad Boys” proved to be the biggest obstacle separating Michael Jordan from an NBA Championship.

Despite this being my first time deep-diving into the story of the Bull’s dynasty, I knew a bit about the rivalry between the Bulls and the Pistons beforehand. Still, learning the real level of hatred between the teams and their fans, as well as details of the Bulls overcoming their greatest enemy, was all very new to me.

The fine points of the story were definitely surprising. Learning the Pistons had special guidelines for rendering Jordan hurt and injured was definitely one of the more interesting, and somewhat funny, details. But besides “The Jordan Rules,” the Bulls’ journey to the top of the world seemed more relatable than I had once thought.

The Bulls were pushed aside, beaten down, and stomped on by the bully. Yet, in true Oscar-winning fashion, they persevered, and through teamwork and dedication, they made it to the other side.

Yeah, that’s like every movie ever. Even more, I think it’s a story all athletes can relate to, despite the reality that most of us never make it to the top.

Another area of confusion I had prior to watching this past Sunday’s episodes was the enigma named Dennis Rodman.

If I’m being honest, I didn’t know much about Rodman prior to this series. Yet, even after he got his chance to tell his story this past Sunday, I still have no clue about this guy.

But neither did anybody at the time, probably even Rodman himself. The hair, the clothes, the piercings, the mid-season vacations; if a young basketball fan had any question about Rodman answered, it was overshadowed by the innumerable amount of new questions that were raised.

Despite Rodman’s persona off the court, I have to admit that I was blown away by his on-court devotion. Images of Rodman flying into crowds — fully horizontal — to save a ball going out-of-bounds are still engrained in my mind. He carried his load while Scottie Pippen was out and put in everything he had while he was on the court.

While I watch “The Last Dance” for the first time, I see a dynasty with a story similar to that of many others — they worked hard to make it to the top, and there were numerous obstacles along the way. Undoubtedly, the biggest difference that sets that of the ’90s Bulls apart from all great sports stories, before or since, has to be Jordan.

And we’re just getting started.

At this point in the story, Jordan has finally received his crown. I’m interested to see how Jordan goes from the king of the world to playing AA for the Birmingham Barons. But baseball, Michael, really?