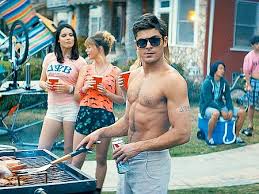 Zac Efron stars in the new movie "The Neighbors"

For those looking for a laugh or 20, new comedy “The Neighbors” is a top choice.

Zac Efron and Seth Rogen co-star in the number one movie that debuted on Friday, May 9.

Efron and Rogen play off of each other wonderfully and make for some really funny scenes.

The plot starts off by introducing new parents Mac (Rogen) and Kelly Radner (Rose Byrne) and their daughter Stella. The young family just moved into their first home, but are feeling a bit old. Mac spends his days at boring desk job while Kelly adjusts to life as a stay at home mom.

To make matters worse, a fraternity moves into the house right next door. Worried about the noise, but also not wanting to seem old the Radners tell the frat boys to “keep it down.”

President of Delta Psi, Teddy (Efron), has his mind set on throwing an epic end of the year bash, but also doesn’t want to upset the new neighbors.

At first everything is great, but all good things must come to an end and soon an all out war erupts between the neighbors.

The pranks that ensue are original and hilarious, some even brought tears to my eyes from the laughter.

There is no denying the raunchiness of this film. The R-rating is definitely well deserved, but all of the foul language and sexual scenes are part of the atmosphere and the movie wouldn’t be the same without it. That said, it is probably not a film I would recommend for family movie night.

A very prominent theme in “The Neighbors” is age and growing up. Mac and Kelly struggle with their new roles as parents and adults while their friends enjoy freedom and spontaneous lifestyles.

Meanwhile, Teddy faces impending graduation and starting his life in the real world which he eventually realizes he is not ready for.

Although this is without a doubt a comedy movie it is well rounded with touches of sentiment, somberness and drama.

“The Neighbors” is a great movie from acting to plotline, so if the R-rating isn’t a problem check it out in theaters now.