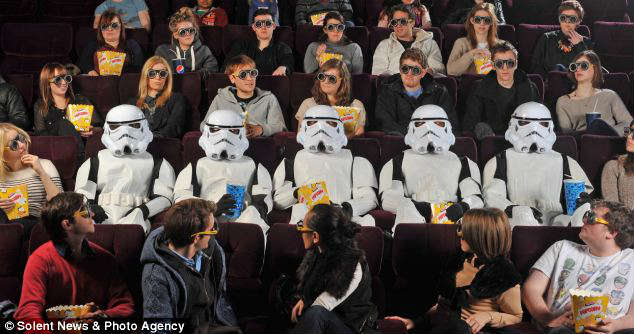 Storm Troopers surprise guests at the premiere of "Episode One" in the United Kingdom.

There are not many movies that are more well known or that have had a larger impact than “Star Wars.”

Today, “Star Wars” stands as a monument in film-making. Even now, almost 40 years later, it is still hard to find anyone who has not seen it.

Lucasfilm, owned by The Walt Disney Co., is currently in production on a new installment to the Star Wars saga. This presents a unique opportunity to look back on the various highs and lows of the franchise, and to see what Disney’s new installment should take away.

It could easily be argued that The Original “Star Wars” Trilogy was the most popular movie series ever made. The Original Trilogy refers to the first three movies in the “Star Wars” saga: Episodes Four, Five and Six.

One of the most controversial things to come out of The Original Trilogy were the three sequel movies that fans have named The Prequel Trilogy.

Despite The Prequel Trilogies’ larger budget, higher quality cast members and more modern technology, The Prequel Trilogy failed not only when compared to “Star Wars” Episodes Four through Six, but also as films in general.

Sophomore Jason Kuhn said, “I liked all the ‘Star Wars’ movies equally as a kid, but as I got older realized that the prequels weren’t very good when compared to the others.”

This is made especially ironic because when the original “Star Wars” Trilogy was being made, it had very few resources and the studio was even pushing for its cancellation.

There are several reasons why the Prequel Trilogy was considered a failure, but the one that is most often pointed out is the trilogies over reliance on computer generated imagery.

J.J. Abrams, who is currently directing the new “Star Wars” trilogy, has made several announcements stating that he intends to use a variety of practical effects to complete “Episode Seven.” This is a step in the right direction. However, it is concerning that the recently released teaser trailer for “Episode Seven” showcased no such effects.

If “Episode Seven” is to remain relevant in today’s age of filmmaking it must contain computer-generated imagery (CGI), but computer effects are much more proven today than they were when The Prequel Trilogy released.

The Original Trilogy relied on practical effects such as sets and model building to create its effects. These methods are not as elaborate as some of today’s effects, but it gave The Original Trilogy a timeless feel, and most of its visuals still hold up.

A large part of what made The Original Trilogies’ effects so believable was that there was almost always a real object creating them. Whether it was model work, costume design, or stop motion, there was usually something physical in front of the camera.

The Prequel Trilogy used CGI before that form of film making had been fully realized. These effects didn’t look very good when the movies came out, and today the whole trilogy looks like a bad video game cutscene.

Sophomore Justin Corso said, “I’d love it if Disney’s new ‘Star Wars’ movies are good. I don’t need them to be though, [because even] if ‘Episode Seven’ is bad, I’ll still have The Original Trilogy that won’t change.”

Disney’s new “Star Wars” trilogy is both an opportunity to right the wrongs of The Prequel Trilogy and a chance to repeat them.

No matter what becomes of “Episode Seven,” The Original trilogy will always remain a film icon and a timeless classic.