The Padres take over the Scots’ court 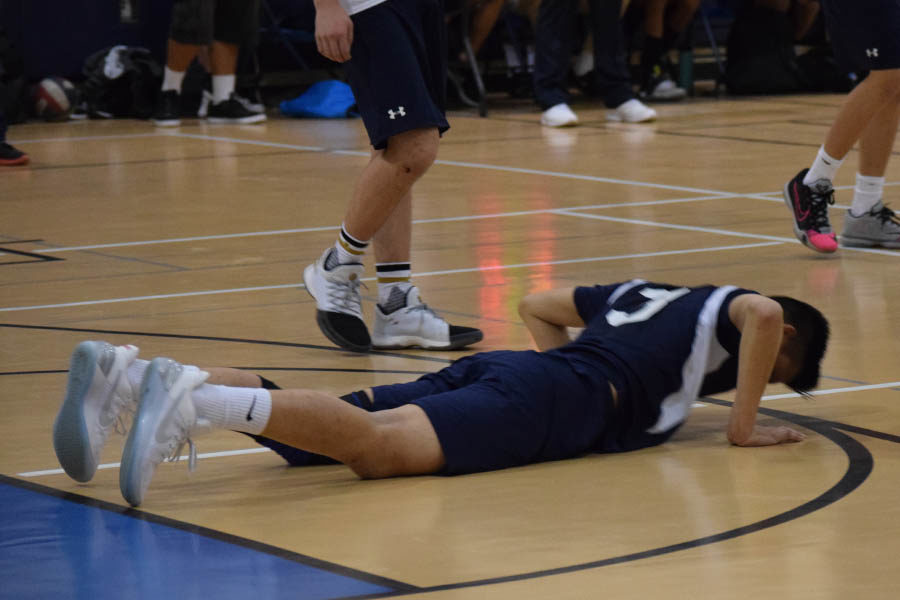 Chris Ding, a senior, dives in an attempt to save the ball but fails.

The Scots got swept out by Serra as the Padres were an unstoppable force throughout the night taking advantage of Carlmont’s court.

On Feb. 28, the Scots lost all three sets against the Padres. Though the Scots put their best effort forward, the Padres team was more developed as the Carlmont varsity boys volleyball team has picked up a series of new players for this upcoming spring season.

Continuing player Jonah Przybyszewski, a junior, said, “I think we played well for the first time on the court, but there was definitely first-time errors. We have a lot of new players and errors just come with practice, and we will work together to adjust together as a team.”

During the first set, the Scots played a close match with the Padres but ended the set with a 25-21 defeat. Chris Ding, a senior, continued to spike the ball over the net earning a series of points for the Scots.
via GIPHY

New players such as James Houston, a junior who plays the position of libero, also contributed to a series of plays in attempts to beat the Padres.

Alex Jin, a senior, said, “I think we played well during the first set, there was miscommunication on the court and our passes need to be more accurate, but there were some really good plays. I think we will improve a lot over the season.”

During the second set, the Scots lost the second match 25-13. The Padres were unstoppable with their hits and blocks, as Padres junior hitter Zach Smith hit multiple strikes in the Padres favor.

Though the Scots tried their best, the team felt they need to work on their passing and overall communication on the work. As a new team, with only three players from last season, the team aims to work well together and hope to develop against the stronger teams throughout the season.

Head coach Micahel Lapuz said, “Our new team has many improving first-time players. There are the techniques that still have to be practiced on and we have to be able to communicate and also recover as the game progresses. We rely heavily on the offense and we need to recover just as much as we can if we want to go far this season.”

The varsity volleyball team will play again on March 15 at Menlo-Atherton.