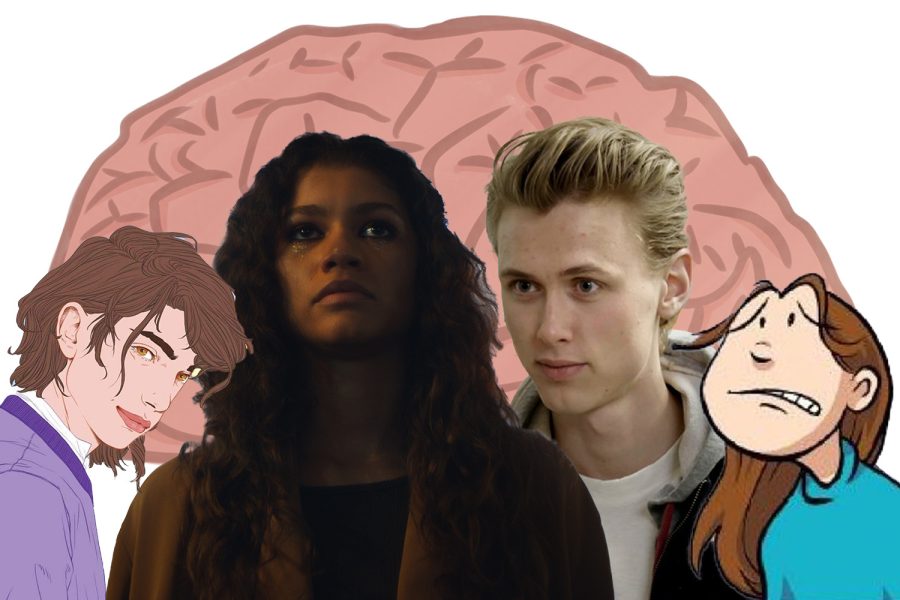 The media has yet to depict mental health as a normal part of life and portray mental health issues accurately. (Brain art by Seona Sherman.)

This article may contain minor spoilers for “I Wish You All the Best,” “Euphoria,” “Smile,” “Skam,” and “Angel Beats!”

I continue searching for representative media in the second installment of my senior project, “The Power of Relatable Media.” In this series, I focus on a specific topic and analyze its current state of representation in the media.

In the 2019 novel “I Wish You All the Best,” author Mason Deaver addresses topics such as these, including how they overlap with identity. Ben De Backer, the novel’s protagonist, is consumed by their mental health issues, affecting their relationships and ability to attend school.

Deaver expertly rejects the notion that mental health issues are one-dimensional problems that exist separately from other parts of someone’s life. On the other hand, most media continues to reuse this idea.

Students may relate to De Backer’s need to stay home from school to address their mental health. In “Students take mental health days,” a feature published in the January issue of the Highlander, author Elise Hsu indicates that some students stay home to take care of themselves, despite resistance.

One such obstacle is parental pressure. Parents may push their children to prioritize academic achievement over health and make it near impossible for them to cite “mental health as a reason for taking time off,” sophomore Sam Dechaine said.

Growing up, Dechaine noticed that mental health was a “taboo” topic. Because of this, people may be hesitant to talk about their mental health for the fear that their feelings are unnatural and ignore symptoms of mental illness. She explains that this uncertainty partly comes from a lack of accurate representation of mental health in the media.

“Current representations of mental health in the media can be ineffective when they are littered with stereotypes, misinformation, and common misconceptions,” Olivia Baum, a freshman, said.

According to Katelyn Gambarin, a senior, including and valuing people with mental health issues in the production of mental health media can lead to the development of accurate representation.

“What needs to be done to make mental health representation the most accurate it can be is having people with those issues working with media to ensure proper portrayal of mental health issues. Otherwise, we’re going to get stuck in the endless loop of generalized problems which will invalidate all the other problems those people experience,” Gambarin said.

“To make [mental health] content more digestible to consumers, these issues are often toned down to where anxiety is feeling stressed out, depression is sadness, and OCD is just being a perfectionist,” Dechaine said.

One may think these phrases simplify mental illnesses, but this is not the case. Instead, these perpetuate myths that ignore the real, complex symptoms and individuality of mental health issues.

The individual nature of mental health is part of why it may be challenging to portray mental health struggles accurately. The impact of media is also highly dependent on how consumers react to it.

“Every product of media is left up to the interpretation of the reader or viewer. Everyone will have a different idea of what something is supposed to look like or how something should be done,” Arianna Behrendt, a junior, said.

For instance, viewers of the HBO tv show “Euphoria” don’t agree on whether its depiction of mental illness is compelling or not. While Gambarin said it “glamorizes” mental health issues, some say it honestly depicts mental illness.

Even when the media creates situations or characters its audiences can relate to, it may overlook that mental health experiences are not one size fits all.

Margot Paluska, a freshman, argues that the media cannot reuse stereotypical depictions of mental illness. She claims that mental health issues “can not be portrayed by one person in one media source.”

Representation of mental health struggles needs to be more widespread and should be as complex as the issues themselves. Luiza Nunes, a junior, urges producers to avoid “representation just for representation’s sake.”

Oversimplification can lead to misrepresentation, making it even harder for people with mental health issues to feel understood. Producers should also strive to use the media to normalize talking about mental health in general.

Mental health is a key part of our well-being, and it’s time for us to embrace taking care of it as much as we do physical health.

In addition to books and television, music is also an influential part of how we view mental health. If musical artists write and sing about their mental health, listeners with the same experiences can feel less alone.

“Music is a way a lot of people, including myself, get in touch with their feelings,” Ella Duarte, a senior, said. “So many artists make music that their audiences can relate to.”

Baum also connects to the music she listens to. Seeing the character Masami Iwasawa on the anime show “Angel Beats!” listen to music to navigate mental health struggles especially allowed Baum to embrace it as a healthy “coping mechanism.”

To further normalize discussions of mental health and recognize when people help, Duarte advocates for mental health to be a more significant part of the school curriculum. As an Advanced Placement (AP) Psychology student, Duarte said that she has better identified how she’s feeling and why she’s feeling that way.

Mental health education is an effective way to authentically learn about mental health issues. Baum highlights “Smile,” Raina Telgemeier’s 2010 autobiographical graphic novel, as a powerful example because of its way of presenting anxiety that is “not over-the-top or harsh.”

Someone’s mental health struggles can also intersect with and affect other identities and experiences. So, LGBTQ+ people navigating mental illness might find it even more difficult to see characters they relate to in the media.

Nunes has found an example of where LGBTQ+ mental health is well-thought-out and handled with maturity: the tv series “Skam.”

“It [the show] takes LGBTQ+ teenagers seriously, holds them accountable without being cruel, tells beautiful stories about friendship and romance, and explores the way mental health may impact all that in a very careful and considerate way,” Nunes said. “Everything feels planned and deliberate, like the characters’ experiences are important and therefore my experiences are important.”

If you are having thoughts of suicide or experiencing emotional distress, call the National Suicide Prevention Hotline at 1-800-273-8255 (TALK).