The Scots take the reigns against the Mustangs 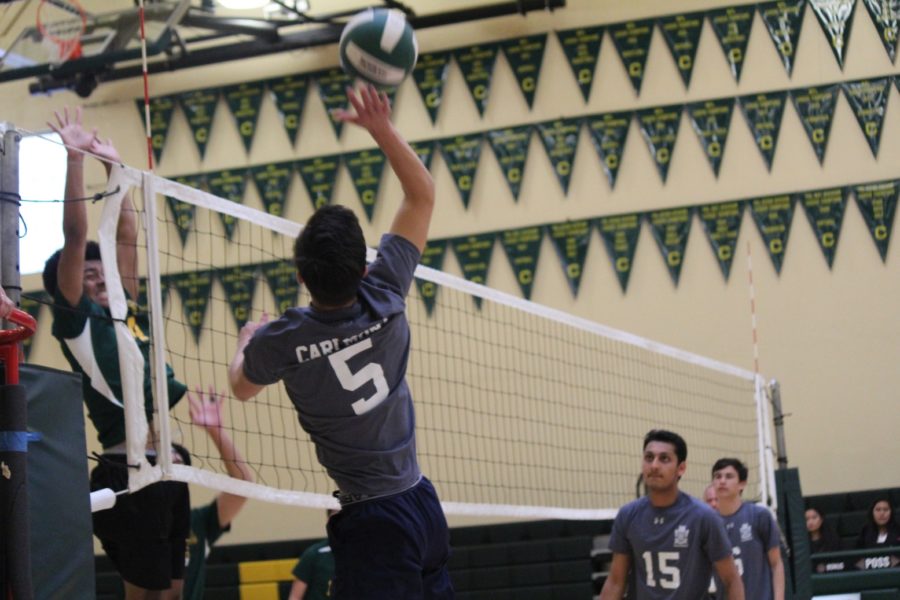 Jason Jung, a senior hits the ball over the net earning a point for the Scots

The Scots stampeded over the Mustangs yet again during their second game against Capuchino this season.

The Scots performance remained consistent on April 19 throughout the men’s volleyball game as the team came together to beat Capuchino High School winning three of the four sets played.

During the first set, the team played aggressive keeping mistakes minimal and spiking the ball over the net with full force.

Kazmin Haider, a junior said, “We played a great game considering it is our first came coming off of spring break. We also had a lot of JV players come up tonight such as a setter, and he played well with our team. We gave it our all, and we were able to pull through.”

The Scots stayed motivated throughout the second set as well winning 25-15, but things began to change during the third set.

The Scots were unable to block the Mustangs hits and keep control of the ball on the court as Jonah Przybyszewski, dove numerous times attempting to save the ball from landing back on their side of the court or out of bounds.

According to Jimmy Rudger, a junior, the game presented a lack of motivation and a series of unneeded errors.

Rudger said, “We were tired and did not come ready to play. I think we could have won three straight sets with more focus and motivation. We made errors throughout the third set giving them points, and we needed to get out of our heads and pull it together.”

Though the Mustangs were able to win the third set, the men hope to clean up during the next game this season on April 21 against Aragon High School.

Finally, the Scots took reigns of the game in the final set winning 25-13.

James Huston, a junior said, “Tonight I think I played pretty average. The whole game came off at a slower pace which just caused everyone to be less competitive and make careless mistakes. When the game is at high-pressure everyone has their head in the games, and that just was not the case.”

The Scots will continue to tighten up their skills to take on the Dons on April 21.