ScotSkim: the storm after the storm 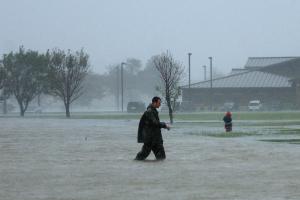 A man walks through floods in North Carolina in the aftermath of Hurricane Florence.

Hurricane Florence aftermath hits the East Coast hard
Hurricane Florence hit the East Coast this week with a lower intensity than expected. The storm, originally a Category 4, was downgraded to a Category 2 as it hit the Carolinas. However, the aftermath of the storm is causing significant damage to the East Coast, and the crises caused by Florence have not yet been resolved. While the storm has officially ended, flooding continues at an alarming rate. All 100 counties in North Carolina have received some kind of weather advisory in the past week.

Due to flooding, several cities in the Carolinas have become isolated, many without power. The destruction caused by Florence is expected to be worse than the effects of Hurricane Matthew, which occurred in 2016 and caused significant damage to North Carolina.

There have been 35 deaths as of Sept. 18, and of tens of thousands of citizens remain evacuated from their homes.

“This is a monumental disaster for our state,” North Carolina Gov. Roy Cooper said. “In many parts of North Carolina, the danger is still immediate.”
‘Fear’ hits the bookstands
The much-anticipated novel by Pulitzer Prize-winning journalist Bob Woodward, “Fear,” came out on Sept. 11. It addressed the inner workings of President Trump’s administration and featured perspectives from high ranked staffers within the White House.

Woodward gained worldwide fame for his co-authorship of the Washington Post articles that exposed the Watergate scandal to the world in the 1970s. Woodward has since covered eight presidencies in numerous books. Woodward is known for his journalistic integrity and especially for his nonpartisan approach to political writing.

The Woodward book is a scam. I don’t talk the way I am quoted. If I did I would not have been elected President. These quotes were made up. The author uses every trick in the book to demean and belittle. I wish the people could see the real facts – and our country is doing GREAT!

“Fear” investigates the Trump presidency and reveals details of the administration which may be concerning to the American public. Since its release, “Fear” has been met with criticism from President Trump for being a work of fiction.

Paul Manafort agrees to help federal investigation
Former chairman of the Trump Presidential campaign Paul Manafort pleaded guilty on Sept. 14 to two charges: conspiracy to defraud the United States and conspiracy to obstruct justice. He now has agreed to cooperate with the government and divulge all the information which the government deems relevant to the investigation.

Manafort was charged found guilty in Virginia on accounts of tax fraud, bank fraud, and hiding foreign bank accounts in August. President Trump praised Manafort for refusing to strike a deal with the government.

But, when Manafort pleaded guilty in Washington D.C. on Sept. 14, he agreed to  fully cooperate with the government.

The active probe, led by former FBI director Robert Muller, is investigating any Russian interference with the 2016 presidential election. Manafort, who was the Trump campaign chairman, could provide the special counsel with information that would link Russia to Trump’s election.

Despite this, Presidents Trump’s legal team denies that Manafort will implicate the president in any way.