Source Zero provides many with a path to living sustainably 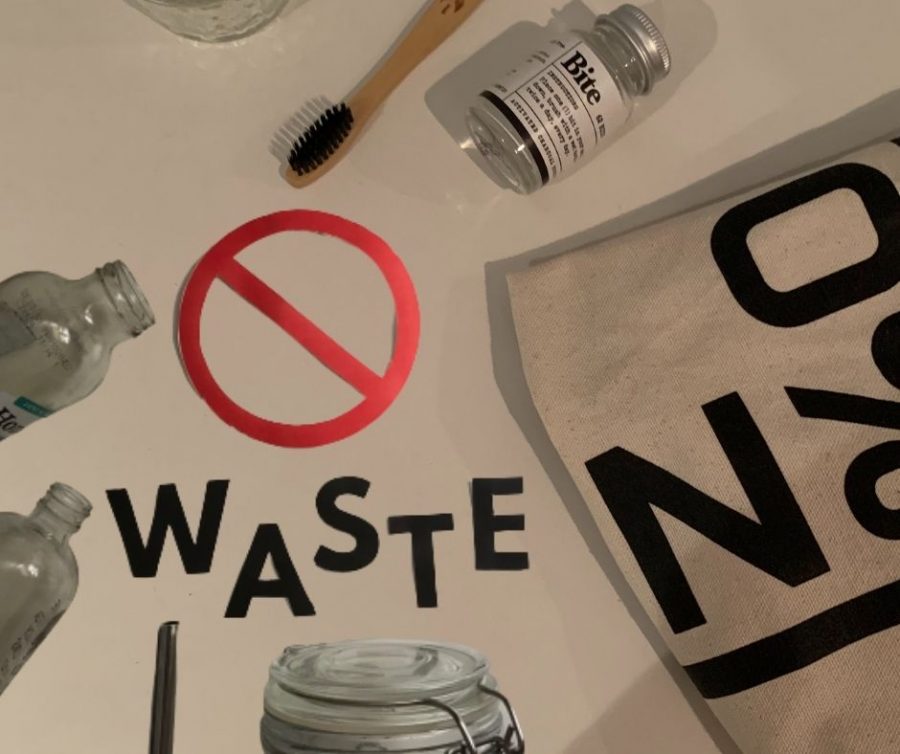 Eco-friendly products like these line the walls in The Source Zero.

The average American will contribute over 1700 pounds of waste annually, making the United States the king of producing waste. Their waste production surpasses countries like China and India, with 250 million tons finding their way into landfills each year.

Few people have made an effort to make adjustments to their wasteful lifestyles or have struggled in their attempts to do so.

“I’ve tried to choose alternatives and reduce my impact with reusable water bottles and glass containers, but it’s difficult when you don’t have your own income,” Lauren McCarthy, a sophomore, said. “Ultimately, my parents have the final say, so it’s not my decision to make.”

Not many pay attention to how detrimental their environmental footprint is. Those who are aware see the zero-waste lifestyle as unattainable because it’s inaccessible and costly.

“I want to do something that can actually help people reduce the amount of plastic that they use,” Merz said. “This concept makes sense as stewarding of the earth, in a way. Taking care of the planet we live on, instead of polluting it.”

Merz is no stranger to the harmful effects of plastic consumption. She’s been utilizing small Santa Cruz grocery stores with soap and lotion refill stations for the last decade. She took it a step further in 2017 when she began her journey of starting The Source Zero.

Waste has been so normalized that people automatically associate “zero-waste” with higher costs, but Merz’s store disregards this narrative by offering affordable prices and adjustments.

“I think it seems daunting at first because it’s like one reusable silicone sandwich bag for $9.99, but that’ll last years and years and years,” Merz said.

Everything from disposable cameras to single-use plastic bags are made to end up in the trash. But this throw-away lifestyle comes with a high cost to the planet and their wallet.

The expensive upfront costs of items put off many consumers when they compare a $32 reusable water bottle to a $6 pack of 32 disposable water bottles. They don’t realize that their bank account chases an endless supply of products with a limited amount of dollars.

That’s not all that encourages constant plastic use, though.

Convenience and accessibility can attribute to this dependency, which continues to be one of the strongest barriers to the sustainability movement. People choose plastic because of ease. This is an issue Merz is well aware of.

“In general, our culture across the world is very dependent on plastic. I know it might be inconvenient to wash things, but it’s more inconvenient to hurt your planet and destroy it for future generations,” Merz said.

David Azoulay, a report author on Plastic and Health, looks into the severe ways plastic can harm people.

Though much of plastic’s adverse impacts are still unknown, scientists continue to research them. One thing’s for sure; convenience isn’t worth your health.

“Plastic impacts are pretty terrifying, so I think it’s more convenient to be healthy and have a healthy planet. This convenience culture can only go on for so long,” Merz said.

She’s an advocate for supporting ethical things, even if it means going out of her way sometimes—Merz partners with local woman artisans and businesses rather than outsourcing to corporations for convenience.

“I use a lot of the different operative creators that I’ve met at craft fairs and farmers markets, which makes things even more local, even more small footprint, and even more small-batch and plastic-free,” Merz said.

Ideally, people could exclusively support small businesses for good causes, especially those that are better for their and the environment’s health. But living entirely zero waste is next to impossible.

Still, that’s not what the average person sees. Instagram feeds make zero waste seem unattainable by endorsing expensive items and unrealistic goals. The lifestyle they promote is inherently classist in today’s society and not a reflection of realistic sustainability.

Lack of stores and expensive items, coupled with costly shipping, deter consumers. Even if products are more cost-effective in the long term, they argue they can’t afford it upfront.

But sustainable living is directly related to how much effort, time, and money people can put in, which means that people can be sustainable creatively.

“You can reuse and save things. Just take the shortcuts; anything is better than nothing,” Merz said. “You don’t have to buy all the fancy stuff. You can just cut up an old t-shirt and make it into a napkin or wrap your cutlery from home and bring it with you.”

The Source Zero has competitive pricing and workshops while pushing the idea of sustainability to aid in one’s low waste journey.

While prices are effective long term, they will continue to lower with more demand and shoppers. As the number of people supporting zero waste businesses grows, more stores like Merz’s will open, and prices will be able to go down as supply increases.

The spread of sustainable shops and the normalization of environmentally friendly alternatives is a step in the right direction.

“I think I can shift the mindset, but people need to start trying, one little thing at a time,” Merz said.